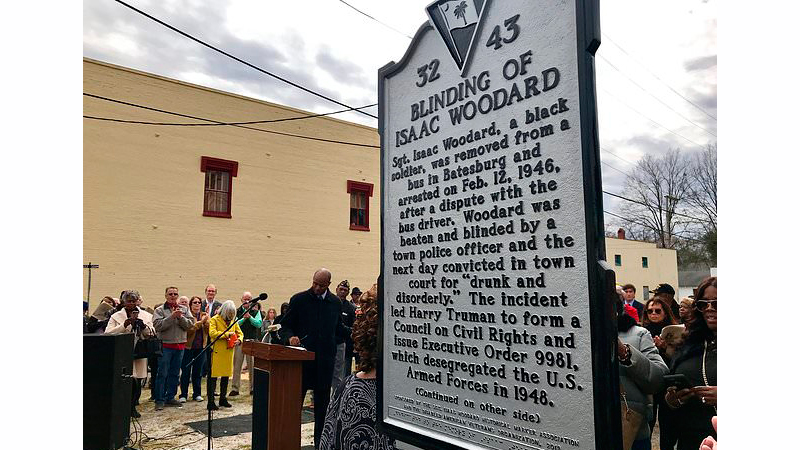 A South Carolina town has honored the memory of a black WWII veteran whose 1946 beating at the hands of a white police chief left him permanently blind and helped spur President Harry Truman’s drive to integrate the U.S. military.

Distinguished guests and members of Sgt. Isaac Woodard’s family gathered Saturday for a private ceremony before moving to the narrow streets of small-town Batesburg-Leesville for the unveiling of the “Blinding of Isaac Woodard” historical marker, which is located at the site of the old police station where the beating occurred.

Inside the intimate gathering of about 80 guests, U.S. Rep. Joe Wilson, Brig. Gen. Milford H. Beagle, Jr. and other officials sat among family members and heard about the lasting impact Woodard’s tragic encounter with an officer decades ago has left on the town and family members.

Hours after being honorably discharged from the Army in February 1946, Woodard was removed from a Greyhound bus in Batesburg and beaten by the town’s white police Chief Lynwood Shull. Woodard, 26, was still in his uniform. Police officers accused and arrested Woodard for drunken and disorderly conduct. The attack drew the attention of the NAACP, whose representatives met with Truman to discuss the treatment of African-American soldiers returning home after war.

After little was done following Woodard’s beating, federal prosecutors charged Shull with violating the decorated former soldier’s civil rights, but Shull was later found not guilty by an all-white jury. Woodard eventually went back home to New York, where he spent the remainder of his life until his passing in 1992.

Robert Young, Woodard’s 81-year-old nephew, said his uncle rarely spoke about the incident, and said their relationship grew closer as he worked alongside him in the following years up until his passing.

“You’ll always be an inspiration to many around the nation,” Young said of his uncle with tears in his eyes. “But most of all, you will always be my uncle.”

Batesburg-Leesville Mayor Lancer Shull, of no relation to the former chief, said Saturday’s dedication should inspire other towns to have a conversation about racism deeply entrenched in the roots of a Jim Crow past.

“This should be an inspiration to pull those rugs out and sweep up what has been under there for years,” Shull said. “This lets people know love will always overtake hate over time. Love will always win out.”

Many officials in attendance echoed the significance of a southern town facing its past and setting right those wrongs. State Rep. Jerry Govan of Orangeburg said it’s important for people to accept and acknowledge these moments in history in order to learn and not make the same mistakes of the past. U.S. Rep. Joe Wilson said the beating had a significant impact on the country due to individuals having to address the injustice faced by Woodard.

Frostburg State University professor Andrew Duncan said Saturday’s dedication was surreal and a different Batesburg-Leesville than he knew growing up in the town.

“I never expected to see anything like this,” Duncan said. “This sort of reconciliation needs to happen in a lot of places, and not just in terms of historical markers but in terms of our political discourse too.”

Beagle, the African-American Commanding General of Fort Jackson, said Woodard’s pain due to intolerance paved the way for Beagle to rise through the ranks into the position he’s in today.

“In my heart I believe he would think his sacrifice was worth it, creating the conditions that paved the way for an integrated Army,” Beagle said. “He helped build the bridge that many like me used to cross the river of inequality, injustice and prejudice.”

Isaac Woodard’s criminal charges were dismissed last year. A portion of the marker is engraved in braille.