A tale of two cities — can Washington convince DPRK to denuclearize?

“It was the best of times, it was the worst of times,” this is how Charles Dickens begins his novel A Tale of Two Cities that is primarily set in London and Paris during the French Revolution. While the circumstances may not be the same, this quote is a perfect summation of the ongoing dynamic between Washington and Pyongyang.

Before they could finally meet for the first time, President Trump’s decision to cancel the much awaited Summit with Premier Kim Jong-un left all hopes for peace in the region hanging by a thread; which has been repeatedly threatened by the oscillatory attitude of both leaders. Their unpredictability remained on full display throughout the period that ultimately led to the talks between the U.S. and DPRK.

Now President Trump and Premier Kim are geared to meet for the second round of their one-on-one meeting, scheduled for 27-28 Feb 2019, in Hanoi. Seemingly everything is going smoothly. However, similar ease was observed in the run-up to the first meeting in June 2018, until the U.S. decided to conduct joint military drills with South Korea (deemed a ‘provocation’ by North),  followed by U.S. National Security Advisor John Bolton and Vice President Mike Pence’s suggestion(and reiteration of past U.S. officials’ position) that the “Libya-Model” be applied to DPRK.

The Summit did eventually happen though, but the outcome was not as perfect as some might have expected.  Post-talks, the overall joint statement seemed vague at best. It lacked the comprehensiveness promised by President Trump at the end of his meeting with Premier Kim. While they talked about ensuring peace and stability on the Peninsula, there was no talk of a peace treaty. DPRK committed to work towards denuclearization of the Korean Peninsula – an issue which later developments showed was not as straight-forward as it seemed and will continue to remain a primary sticking point going forward. 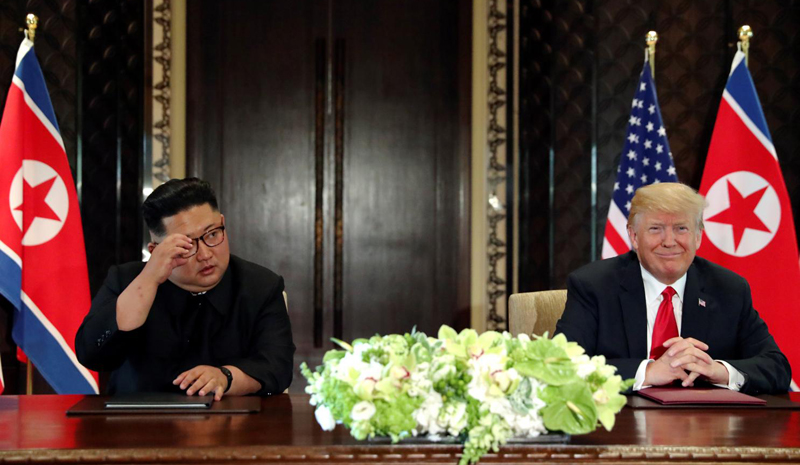 Washington has continually called for the ‘denuclearization of North Korea’ in the past, whereas Pyongyang has always called for the ‘complete denuclearization of the Korean Peninsula.’  This was also pledged by Pyongyang and Seoul during the historic meeting between their Premiers, in April 2018. Pyongyang has persistently called for the removal of U.S. extended deterrence provided to Seoul as part of this denuclearization – even during past negotiations in the Six-Party Talks. Such demands from DPRK – if reiterated in the upcoming Summit – will put the U.S. in a paradoxical situation. Let’s assume that the U.S. agrees to such an arrangement of pulling its forces from the Peninsula – to uphold its non-proliferation ideals – it will essentially be losing a major base that has been used to keep a check on China.

Furthermore, DPRK has not given any concrete pledges to fully denuclearize unilaterally; the most it has said in the past is that it will consider this option in exchange for ‘unspecified guarantees.’ The U.S., in the previous Trump-Kim Summit, pledged security assurances in return for North Korea’s denuclearization. However, DPRK’s reiterated call for the U.S. to remove its forces might not sit well with the latter (despite America’s ongoing military cost-sharing dispute with South Korea) because of the China factor – eventually unraveling its security guarantees and bringing both States on square one in this regard.

If the U.S. agrees to the arrangement of pulling its forces from the Korean Peninsula it will essentially be losing a major base that has been used to keep a check on China

Verification of the fulfillment of DPRK’s pledges will continue to be another obstacle in the ongoing negotiations. DPRK has had issues with the verification mechanisms presented previously during the past Six-Party Talks. The joint statement of Trump-Kim meeting failed to present a timeline or steps to verify possible disarmament by DPRK. As a ground reality supplanting this assertion, while DPRK claims to have dismantled/destroyed some missile test sites and missiles engines, it continues to bar verification by international inspectors. Moreover, numerous reports suggest it is actually working to expand its long-range missile base instead of curtailing it.

Past lessons will have to be kept in mind by both parties before going further in the negotiations. There have been numerous proposals – which included the verification issue – presented by both sides that were shot down by the other because of the lack of mutual trust. One such proposal was Washington’s complete, verifiable, and irreversible dismantlement (CVID) of Pyongyang’s nuclear program. The latter in return proposed to freeze its program instead of scrapping it completely. This proposal may come up once again as the negotiations ripen between the two sides.

From the current readings of this historic negotiation process, at most, this engagement with Washington could be used as a stepping stone by Pyongyang to pursue diplomatic relations with other states, making it project itself as a rational and important regional player. This was evident from its diplomatic meetings with India and Russia around the same time as the Trump-Kim Summit last year. The second likely upshot could be bilateral rounds of engagement with the U.S. trickling down to next few years without reaching any concrete outcome – yet eventually leading to the resumption of the Six-Party Talks, which is again back to square one in this whole equation.

The bottom-line remains, DPRK will continue to evade complete, verifiable denuclearization as long as nuclear weapons are seen as a key to maintaining its security. Nevertheless, the seeming uncertainty shrouding this whole process and DPRK’s dealing tactics with the U.S. can be summed up by echoing Dickens again; it is indeed the best and worst of times, the age of wisdom and foolishness, and the epoch of belief and of incredulity!