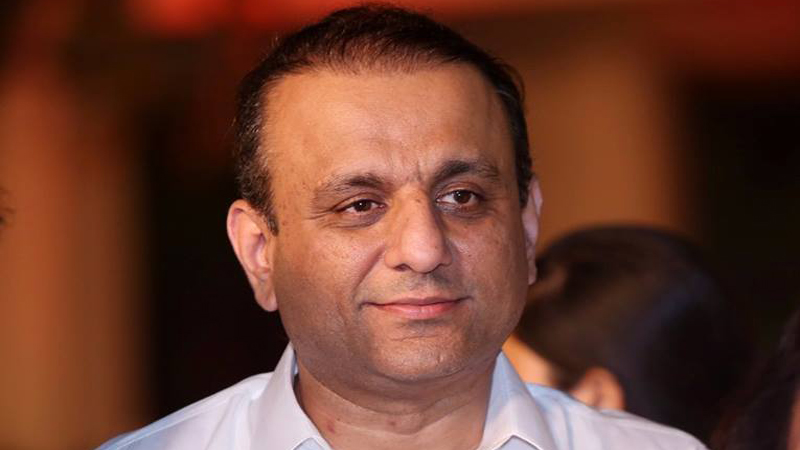 Aleem Khan was taken into custody as he appeared before NAB Lahore as part of an investigation being conducted into cases pertaining to accumulating assets beyond known sources of income and owning an offshore company, also revealed in the Panama Papers leaks.

The PTI leader will be presented before an accountability court today to seek his remand.

The press release stated that Aleem Khan had started a real estate business in which he invested tens of millions of rupees. He bought 900 kanals of land and a further 600 kanals of land through a company set up for this purpose, A&A Private Ltd. However, according to the accountability bureau, the PTI leader was unable to show the sources of income with which he purchased the land.

NAB has further alleged that Khan set up multiple offshore companies in the United Arab Emirates (UAE) and Britain in 2005 and 2006, using them to purchase assets that cannot be explained by his means. The press release added that NAB Lahore’s investigations of these companies is ongoing. It stated that Khan’s arrest was precipitated after they found evidence of tampering in official records, adding that an investigation of his personal and ‘benami’ assets will continue as per the law.

Earlier, Aleem arrived at the NAB Office in Thokar Niaz Baig at 10:45am. During an informal talk with media, he said he has been summoned by NAB and that he will share further details afterwards. However, he was prevented from leaving the office and the cars he had arrived in were told to leave.

Following the arrest, Aleem resigned from the post of Punjab local government minister, family sources said. “I will fight against my arrest and the case in court,” Aleem was quoted as saying.

Punjab Information Minister Fayazul Hasan Chohan told a private TV channel that NAB has the authority to arrest any official or bureaucrat who owns disproportionate assets. “A case had been ongoing against Aleem and he appeared before NAB for the second time in that case,” the minister said. “Aleem has never spoken against NAB or state institutions and neither will the Punjab government or any officials do so – this is the difference between us and the Sharifs and Zardaris,” he said. “Aleem is not a suspect and no reference has been filed against him,” he asserted.

Chohan, however, rejected reports that Aleem has resigned from the ministerial post. “There is no need for him to resign right now and nor has a resignation been forwarded to the Punjab chief minister,” he maintained.

Following the arrest, Aleem Khan’s spokesmen Mian Zahid Islam in a statement issued in response to NAB’s press release clarified that the matter of Park View Housing Society was never mentioned till date in the investigations held so far. “Aleem Khan’s his name was not included in the list of Panama leaks. He attended all the call notices of NAB and provided all the documents well in time as and when demanded. It is also questionable that all the record of offshore companies is already abroad and how it can be tampered?” he said.

“Similarly, land indicated by NAB by company A&A was sold out in 2006 for which all the money trail was also provided by Abdul Aleem Khan,” the spokesman said. Apparently arrest of Abdul Aleem Khan has no logic but he has high regards for courts and it is hoped that justice would be done, he added.

“However, question arises that on the allegations levelled in 2005-06, why an investigations has started after 15 years … if something was done wrong, why it took such a long time to launch inquiry,” he asked. “As it was only due to contesting by-elections in 2015 and supporting PTI and Imran Khan that PML-N lodged complaint against him after such a long time,” he concluded.

DG NAB Lahore, however, dismissed the ‘favourites’ rhetoric and said the bureau was working in the national interest without any bias. “Chairman Justice (r) Javed Iqbal has directed NAB to take action against corrupt elements. All mega corruption cases are being dealt on merit and will reach their logical conclusion,” he asserted.

Later in the day, Governor Chaudhry Sarwar and Chief Minister Sardar Usman Buzdar jointly presided over a high-level meeting at the CM’s Office to review the situation arising in the wake of arrest of Aleem Khan.

The participants of the meeting paid tributes to the decision of Abdul Aleem Khan to resign from his ministry and appreciated his services for the party. The meeting also expressed its complete solidarity with Aleem Khan.

While paying tributes to Aleem Khan, the participants said he has rendered invaluable services for Pakistan Tehreek-e-Insaf (PTI). The meeting decided that no politics or blame game will be made on the issue. The participants maintained that they expect justice, adding that PTI believes in the supremacy of law.

“Unlike the past, no institution is under any governmental pressure now. Past governments tried to denigrate the institutions through their gratuitous condemnation,” the meeting remarked. “Unlike the past governments, the PTI-led government fully believes in the supremacy of law. The law will find its course itself and Aleem Khan will get justice,” the participants hoped.