Gunmen kill nine in attack on police station in Loralai 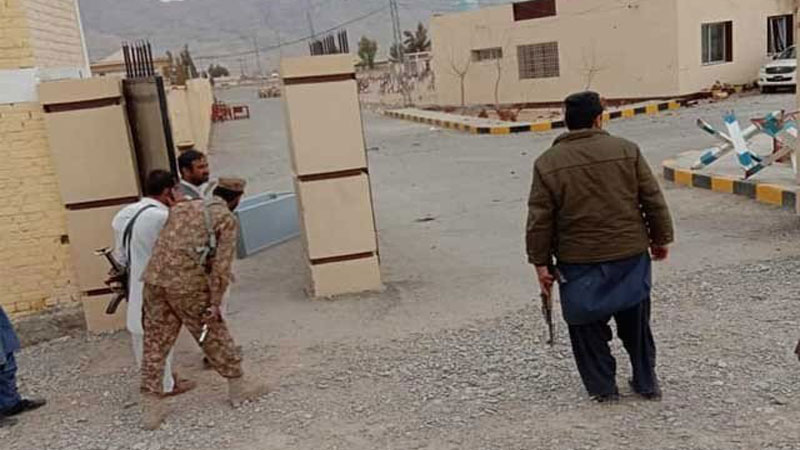 At least nine people died and 21 were wounded when gunmen blasted their way into a police station in Balochistan on Tuesday while candidates were sitting for a police entrance exam, officials said.

A statement issued by the Inter-Services Public Relations (ISPR) said a group of three gunmen attacked the entrance of the deputy inspector general’s office in Loralai district. One gunman blew himself up and the others opened fire on police and around 800 candidates taking an exam to join the force, killing three policemen, five civilian employees and one candidate. Twenty one people including 12 police and nine candidates were wounded.

Soldiers from the army and the Frontier Corps were called in to evacuate the building and clear the gunmen. “During the clearance operation, the remaining two suicide bombers have been shot dead and the area has been cleared,” the ISPR statement said.

“Senior police officials were busy selecting candidates for different categories of civilian jobs when these terrorists entered the compound and hurled hand grenades,” Balochistan Inspector General of Police Mohsin Butt said. The policemen deployed at the entrance responded by shooting at one of the three attackers, who blew himself up, he said, adding that other two attackers took refuge in one of the side rooms and opened indiscriminate fire.

Butt said that the recruitment test for police clerks was the target of the assault. The office was initially fired on, which was followed by an explosion, he said.

Nasir Shah, SHO Loralai police station, said one of the gunmen was wearing suicide vest and he blew himself up at the entrance as other attackers stormed in.

The injured were shifted to the Combined Military Hospital, Quetta, via Pakistan Army helicopters.

Medical Superintendent of Loralai Civil Hospital Dr Faheem Kakar had earlier said that of the 17 injured brought to the hospital, two civilians were in critical condition and were shifted to Quetta CMH.

The Tehreek-e-Taliban Pakistan (TTP) claimed responsibility of the attack.

Earlier this month, at least four members of the security forces were killed in an attack on a Frontier Corps training base in Loralai.

Meanwhile, Prime Minister Imran Khan has strongly condemned the cowardly act of terrorism. He lauded the Pakistan Army, Frontier Corps and other security institutions for their timely action, which led to avoiding a big loss.

The prime minister prayed for eternal peace of those martyred and for early recovery of the injured. He said the cowardly act reflected the defeated mindset. “Our brave armed forces, police and nation were in high spirit,” he said, adding wherever the terrorist elements would try to emerge to fulfill their nefarious designs, the state would fulfill its responsibility. Pakistan has no place for terrorists and their facilitators, he added.

Former president Asif Ali Zardari also strongly condemned the terrorist attack and demanded that the government further tighten the noose around the terrorist elements. He said the victim families are not alone as the whole nation is standing with them in this time of grief.

In a separate statement, Pakistan People’s Party Chairman Bilawal Bhutto Zardari condemned the incident and said that terrorism in any shape or form is intolerable. He sympathized with the bereaved families and those injured in the attack.