* Even before turning towards the path of Allah, he led a very simple and a pious life and used to spread happiness with whatever he had and never worried about tomorrow 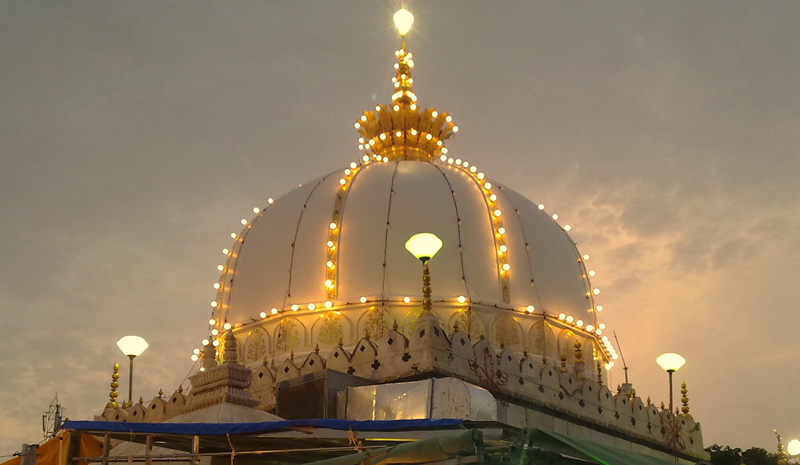 Khawaja Moinuddin Chishti (RA) was born to a respected family who were descendants of Hazrat Ali (RA) through his sons Hazrat Imam Hassan and Hazrat Imam Hussain.

He was born birth in the village of Sanjar in 537AH which still exists today. His father’s name was Khawaja Ghayasuddin and his mother was Bibi Umulvara. She was extremely happy when she knew she was expecting a baby and she herself could feel the change amongst people during that time as foes turned into friends. But he was born at the time when bloodshed was at its peak between Muslims and Non-Muslims. So his father decided to leave Sistian and settle in Neshapur as ulemas were being killed mercilessly and even turmoil of institutions took place. As he grew up, he learnt holy Quran at the age of nine and lost his parents at the age of 14. First, he lost his mother followed by his father. He was left alone but made himself strong and he led his life in an exemplary style. He was alone and worked on his orchard by watering plants and pious dervish came to him. Ibrahim Qandoozi was one dervish who came to him and Moinuddin Chishti kissed his hand and made him sit under a tree’s shade. The young host served him grapes. Ibrahim Qandoozi was very delighted and in return, he gave a slice of cake to Moinuddin. Without any hesitation, he ate it. He was showered with the light of wisdom and radiated divine manifestations. After this incident, he noticed that Ibrahim Qandoozi abruptly disappeared. He wasted no time and decided to give up all his carnal belongings and distributed all his money amongst poor people. He even broke all worldly ties and set out to Samarkand and Bukhara for greater knowledge under the bright light of holy Quran and Sunnah. He was all alone without any food or penny but with great jubilation to seek the truth. Indeed he never knew he would become the Allah Awliya and balm the wounds of afflicted humanity.

Then he became the disciple of Usman Harooni. He inherited an orchard at the age of 16. Before turning to the path of Allah, he led a very simple and a pious life. He used to spread happiness with whatever he had and never worried about tomorrow. Even when he used to see someone’s baby crying while someone visited to see his mother, he used to pass sign to his mother to breast feed the baby herself which indeed satisfied the baby.

As Moinuddin acquired the best wisdom by his teacher, he decided to travel along with him. They both went to Mecca and Medina and performed Hajj together.

One night, he dreamt that the Holy Prophet (PBUH) is giving him a signal to proceed to India and secure the lives of people there. So he started his journey passing from Isfahan, Bokhara, Herat, Lahore and Delhi gathering information by meeting various prominent Sufis. During his journey, he enrolled a lot of people to his motive and many joined him. He blessed many people with his spiritual powers and removed their miseries. But he faced resistance from people in Ajmer, at the age of 52, around 587AH for spreading the divine power. Moinuddin set out for Ajmer in India with his “invisible powers” to be successful. At the time he left for Ajmer, the sub-continent was ruled by Prithivi Raj Chauhan. On way to Ajmer, he stayed on a hill of Anna Sagar and that place is known as the Chillah of Khawaja Sahib. He became a very pious Dervish, who spent his life in spiritualism for the sake of Allah reorienting the lives of many to the trajectory of truths’ by laying his own majesty to the world.

With his devotion of intimacy, austerity, great moral character and power of silence, he won the hearts of hundreds of thousands of people without any carnal stockpile. His kind nature and dedication to the mankind made him known as Gharib Nawaz. Moinuddin at Ajmer Sharif today superintends the lives of many.

Moinuddin focused and spread the word that giving is the source of happiness. His determination began with the thought that no one gets poor after giving but it always multiplies. He believed that one who has strong faith can never cause harm to humanity. Whoever came to him for help or solution, he would be the humblest and the kindest towards their miseries. Due to his simplicity and generosity, people world-wide embraced Islam. His main principles and philosophies were conducted for people in that era and for people today as well. He has always been an exceptional saint in India. His affection and silence changed the stoniest hearts of enemies. His spiritual powers amazed the bitterest people who came to harm him.

One night, he dreamt that the Holy Prophet (PBUH) is giving him a signal to proceed to India and secure the lives of people there. So he started his journey passing from Isfahan, Bokhara, Herat, Lahore and Delhi gathering information by meeting various prominent Sufis

Even Ajai Pal, leader of powerful magicians submitted himself towards the divine powers of Moinuddin. Khawaja Sahib continued his mission on the path of truth to people and enjoyed his graced meetings. So this was the reason why he settled in Ajmer Sharif.

He brought the message of love, peace and generosity. He fulfilled his objectives that are to bring together the races, communities and castes. He wanted to elevate people from materialistic concerns, the main reason of devastation today. The essence of his teachings include firstly, the true friend of Allah is one who has three qualities. They include the quality of hospitality, one should be generous like the ocean and one should rise and benefit others in every manner. Secondly, the noblest character is he who has traits of being bountiful, cheerful and friendly. Thirdly, the ways to demolish the hell punishments include feeding the hungry, helping a person and supporting the aggrieved.

Moinuddin’s preaching and acts tend to show hatred for infidels.

Moinuddin is known as Sultan-e-Hind. It is proved that he is credited for bringing together Christians in India and walk on the path of spiritualism.

Once, Moinuddin was sitting by the Anna Sagarlake with his flock. There he stopped the boy and asked for milk but the boy claimed that his cows were unable to provide milk. So Moinuddin Chishti smiled and asked him to pull out milk from a particular cow which became a successful act of pouring out milk. The milk that he drew out was enough for 40 people to drink.

Moinuddin visited Ajmer Sharif and camped under a tree outside the city but Prithviraj Chauhan’s keepers disturbed his flock. Moinuddin with his companions moved away. But the next day, their camels didn’t wake up. So their keepers chased and went crying back to the pious man and begged and asked for forgiveness. Moinuddin asked them to move away and their camels became alive again.

Moinuddin asked Pal to use his powers and bring back the water of Ajmer but he failed. He tried several times but people got to know about his real position so in the end he embraced Islam and became the most devoted mureed. These incidents made him a special person and of the Will of Allah Almighty. Even today, people visit his shrine and never come back empty handed.

Locals visit his shrine every Thursday and follow his norms such as covering the heads despite gender. His urs (death anniversary) is celebrated once a year and at that time, visiting the saint’s shrine is highly recommended. It is a very huge gathering which also promotes the idea of praying together. While visiting their shrine it is very important to put up a chaadar, flowers or sweets and water and langar (open kitchen) is practiced with the financial support of devotees to accommodate large gatherings.

During these occasions, unasked charity is received known as Futuh.

The writer can be reached at afzaraheel.96@gmail.com