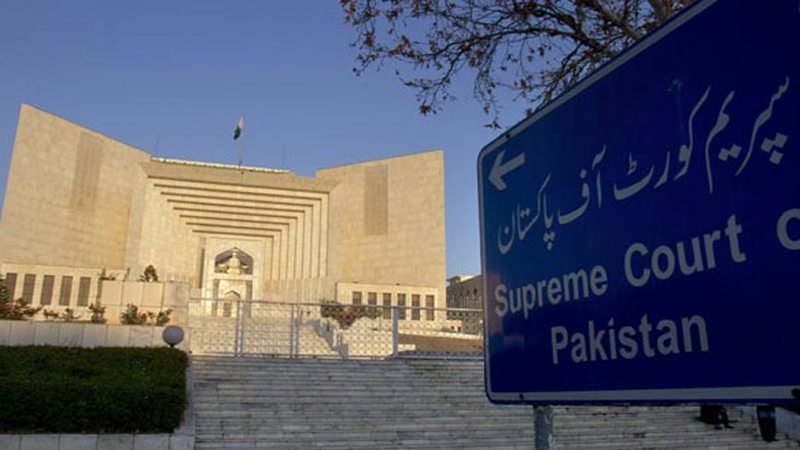 The Supreme Court on Thursday ordered an end to all commercial activities on military lands in Karachi, media reports said.

While hearing a case pertaining to illegal constructions in the port city, a two-member bench comprising Justice Gulzar Ahmed and Justice Sajjad Ali Shah ordered Sindh Chief Minister Murad Ali Shah to summon a cabinet meeting and determine how the city will be restored to the shape envisioned in its original master plan. The bench directed all secretaries concerned to take part in the cabinet meeting and ordered them to come up with a comprehensive report in two weeks.

During the proceedings, Justice Gulzar wondered why the armed forces and the Civil Aviation Authority (CAA) were running wedding halls and cinemas. “If it is their job to do,” he asked.

Taking aim at the CAA, he noted that a wedding hall was being operated near the Karachi airport, which had been the target of a terrorist attack in the past.

Then turning to the armed forces, he asked how a wedding hall was being operated so close to the Central Ordnance Depot, a facility meant for stockpiling active ammunition and weapons. “Have some fear of God!” he thundered. He also asked why walls were being erected along main thoroughfares on the wishes of an armed forces officer, who, the judge said, wishes to use them to generate revenue from billboards. “And, behind these walls, big buildings are being constructed,” he noted. “If they [the people involved] had their way, they would be constructing buildings on the streets as well,” he observed.

Rejecting a report presented by the Sindh government and Karachi Development Authority officials, Justice Gulzar lambasted them for ‘singing lullabies’ for the court. “This report of yours is of no use,” he remarked. “If we passed an order on the basis of this report, your entire government will be sent reeling,” he warned.

“Don’t tell us bedtime stories,” Justice Gulzar censured the Sindh advocate general. “You do know AG sahab, what it means to sing someone lullabies? It means, ‘Listen to this lullaby and go to sleep’. We are not here to be sung to sleep,” he said. “You have a good secretary in Mumtaz Ali Shah, and yet you have been able to achieve nothing,” he complained.

The court ordered that the Sindh government’s report be submitted along with formal architectural plans and suggestions. “Let me make it clear: This city will be restored to its original master plan,” Justice Gulzar asserted. “Look at what the Defence Housing Authority (DHA) has done to the coastal strip,” he remarked.

“They have encroached so far into the sea that if they had their way, they would build another city on the sea itself. The owners of DHA will [then] encroach on the entire sea all the way to US and plant their flags there,” he commented. “They are currently wondering how they can make inroads into India as well,” he added.

The apex court also ordered the occupation of the Sewage Treatment Plant-II (TP-II) to be dealt with post haste. Justice Gulzar asked the managing director of the Water Board if the land had been emptied yet. The director replied that the issue had been handed over to the KMC as per court orders. The court subsequently ordered that the land be turned into a public park.

Similarly, the court ordered that Askari Park, which was made on the land of the old Sabzi Mandi, be opened for public use and a wedding hall constructed there be demolished immediately. “A number of other wedding halls and marquees have also been identified for being built in violation of laws, including Global Marquees near FTC on Sharea Faisal. All cantonment lands meant for cantonment purposes are to be used only for cantonment purposes and not for any other use and their use shall be restored,” read the written order of the court. “A report in this regard shall be made available to this court on the next date; in particular cantonment areas Rashid Minhas Road, Karsaz and Shahrah-e-Faisal are initially pointed out and a report in this regard be made available to this court,” it added.

The order also directed the removal of encroachments from Railways land, lands along the Malir River, Korangi Industrial Area and all other places meant for parks, playgrounds and other amenities under the city plan.

Earlier at the outset of the hearing, the bench expressed severe displeasure at the absence of Karachi Metropolitan Corporation (KMC) and cantonment board officials. Only Sindh Chief Secretary Syed Mumtaz Ali Shah, Commissioner Karachi Iftikhar Shalwani and Advocate General for Sindh Salman Talibuddin were present in the court.