* Withholding tax on bank transactions waived off for tax filers
* Duty on newsprint abolished completely
* Import duties on 1800cc and above cars to go up
* Duties on budget mobile phones reduced, but high-end sets will get more expensive 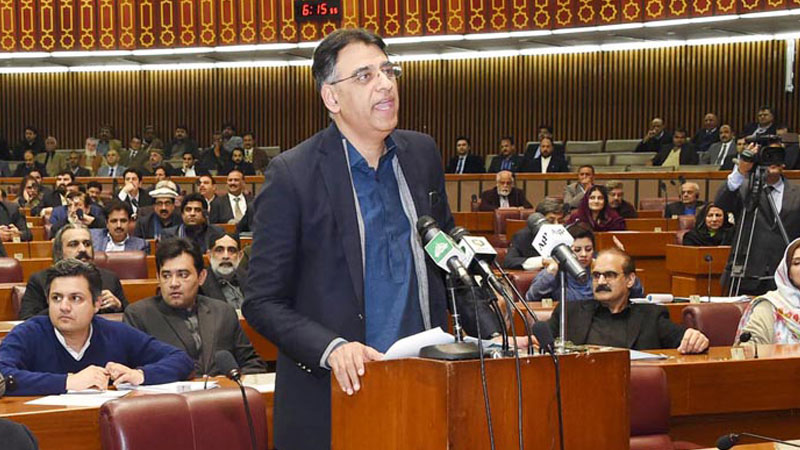 The government on Wednesday presented an economic reforms package envisaging revolutionary incentives and measures to encourage investment, exports, ease of doing business and strengthen important sectors of the national economy.

Asad Umar announced to reduce income tax on housing schemes for low-income people from 39% to 20% to encourage housing sector under prime minister’s project for construction of five million houses for the middle and lower middle classes of the society. He said a revolving fund with an amount of Rs 5 billion will provide interest-free loans for the construction of small houses.

Touching upon the taxation sector, the finance minister proposed to abolish withholding tax on banking deposits and transactions for the filers. He said non-filers would now be allowed to purchase automobiles upto 1300cc. However, their tax rate will be enhanced to generate more revenue and encourage the people to become filers. The minister said taxes on cars with engine capacity of 1800cc and above will be increased. He said Gas Infrastructure Development Cess will be removed from the fertiliser sector.

To promote ease of doing business, Asad Umar declared that the business community will now be required to file their withholding tax statements only twice in a year from the previous practice of filling 12 statements a year. He said tax on marriage halls of 500 square feet in Islamabad will be reduced from Rs 20,000 to Rs 5,000.

The finance minister said a transparent and simplified tax payment scheme is being introduced on the long standing demand of traders. He said this scheme will initially be launched in the federal capital and then replicated in the entire country.

He said the present government believes in free media and wants to make it a profitable industry. He announced that duty on the import of media industry related material and equipment is being abolished altogether.

Asad Umar said the growth of manufacturing sector has witnessed a sharp decline over the last 10 years as a result of flawed policies of the previous governments. He said despite financial constraints, the government is reducing duties on import of raw materials used in the industrial sector. In some cases these duties are completely being abolished to uplift this important sector of economy, he added.

The minister said super tax is totally being abolished for non-banking companies from July 1 whilst corporate tax will be reduced by 1% every year. He said that ratio of savings has reduced to 10% percent, adding that the government is proposing abolishment of tax on the savings scheme. He said regulatory duty on the component of diesel engines is being reduced from 17% to 5%.

The minister announced a number of measures to motivate investment in the stock exchange. These included abolishment of 0.2% withholding tax on trading of shares. He said the tax refunds have soared to Rs 200 billion and the government is introducing a scheme in consultation with the business community to address the issue. He said the government is bringing a promissory note to address the liquidity issue of the entrepreneurs.

Asad Umar said the government is contemplating legislation with the cooperation of the opposition on Gas Infrastructure Development Cess. He said the passage of the bill will help reduce the prices of Urea by Rs 200 per bag. He said there is also a production index on the loans of farmers. He said this production index is being reduced from 6,000 units to 4,000 units.

The finance minister that a medium-term economic framework will be announced next week, adding that any suggestions from opposition on the matter are welcome.

Earlier, Asad Umar began by stating that this was not a mini-budget being presented but rather a set of economic reforms. He asked what the previous government had left behind for the people of Pakistan.

“Two years ago, an economic situation began to develop when all economic experts started to say that danger bells are ringing. But instead, those in power did not pay heed, they thought the people were ignorant, and instead they conspired to ‘buy’ an election.”

Umar said the deficit has grown to Rs 900 billion, asking who would fill this gap. “How will this gap be filled? Will it come from their Swiss accounts? No. That is filled with money paid by the citizens.”

According to the finance minister, there were record losses in Pakistan Steel Mills, Railways, and other institutions, and the opposition had left the country in debt of up to Rs 2,500 to Rs 3,000 billion.

He also brought attention of the House to the dangerously low level of exports. “Today exports are at 40 percent. Of the entire national output, exports were 14 percent and now they are just 7 percent of the economy.” He said the deficit of power sector has risen to Rs 450 billion and that of gas sector to Rs 150 billion.

“We took difficult decisions to turn around the economy. The economy is now reviving as a result of our corrective measures. Exports are witnessing a boost while imports are on the decline. The current account and trade deficits have substantially been reduced,” he said. “However, we have to strike a balance in revenue and expenditures,” he added.

Umar hoped that by the time of the next general elections, the PTI government will not need to ‘buy’ an election because of its performance in improving the economy.

He claimed that by 2022, the country’s growth rate will be at its highest and current account and fiscal deficits at their lowest in 15 years.

Prior to the mini-budget presentation, Opposition Leader in National Assembly Shehbaz Sharif said a judicial commission had been announced the same night on the Model Town incident.

He was responding to the PTI government comparing the PML-N government’s handling of the Model Town incident to the killings in Sahiwal.

Responding to the opposition leader, Foreign Minister Shah Mehmood Qureshi said the government not only condemned the Sahiwal incident but the prime minister issued immediate directives to the chief minister.

“What has been said about an elected chief minister is not appropriate,” he asserted.

Qureshi said the prime minister directed that a report on Sahiwal should be presented within 72 hours.

“The JIT within the timeframe came to the conclusion that the Khalil family was innocent. Unlike the past governments, this government did not try to suppress the facts,” he added.

According to Qureshi, the facts will be presented before the parliament and those responsible will be held accountable. He requested that the incident should not be used for political point-scoring.

The House will now meet at 11 am on Thursday (today).