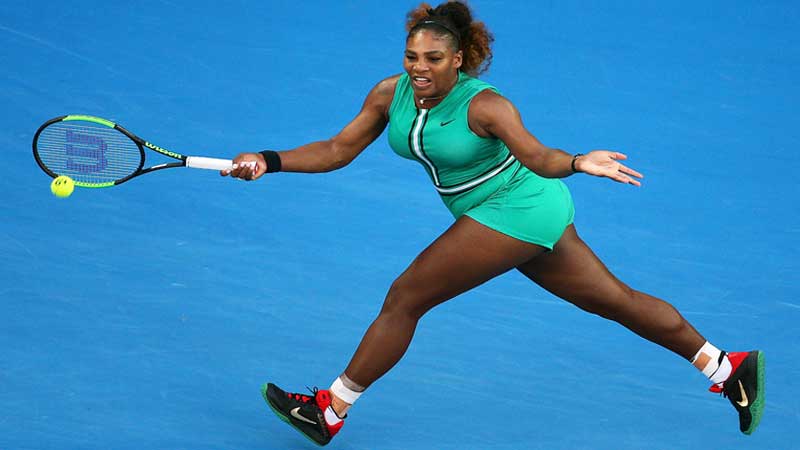 Serena Williams staved off a spectacular fightback from world number one Simona Halep to reach the quarter-finals of the Australian Open on Monday and remain on course for her first Grand Slam triumph since becoming a mother. Williams’ thrilling 6-1 4-6 6-4 win was a major step towards the 37-year-old American great equalling Australian Margaret Court’s all-time record of 24 Grand Slam wins as she set up a last-eight meeting with Czech seventh seed Karolina Pliskova. The seven-time Australian Open champion was eight weeks pregnant when she won the last of her 23 Grand Slam titles at Melbourne Park and only returned to tennis last year after the birth of her daughter Alexis Olympia in September, 2017.

She made two more Grand Slam finals last year only to lose the finals at Wimbledon and the U.S. Open but this triumph over the world’s leading player felt like another hugely significant step on the road to regaining her old dominance. Williams showed she has lost none of her brutal power and athleticism against French Open champion Halep, who has finished the last two years on top of the women’s rankings. The Romanian broke Williams’ serve in the first game but that was the only one she managed for the rest of the opening set as the American bulldozed her way through the set in 20 minutes, serving it out with an ace.

Coming into the match with eight wins in her nine encounters against Halep, it looked as if Williams would breeze through the match after the opening set mauling she handed out. But the 27-year-old fought back by forcing to move Williams more and drew level at one set apiece after breaking her a second time.

“That’s why she’s number one. She literally lifted her game to a new level. I didn’t. I kind of stayed at the same level, and I should have looked at my game, as well,” Williams told reporters. “But it’s a part of this journey on my way back. It’s 10 months, so I can’t be too upset at myself. I felt like I did have an opportunity to win that in straight sets, but then I’m playing the number one player in the world.” The deciding set turned into a war of attrition as both players landed heavy groundstrokes and Williams had to save three break points for a crucial 3-3 hold.

Williams landed the decisive break in the next game before holding firm to seal the match in an hour and 47 minutes when Halep hit a forehand wide. “I will start with a joke. I felt like I had been hit by a train in the first set. Everything was too fast,” Halep said with a wide grin, leaving reporters to burst out laughing.

“I didn’t get scared about the first set, because I knew I have a better level. “After the first set, I got fire inside myself, and I said that now I start the match. So it was much better. Game by game, I felt that my level is growing, and I had more confidence to go through it.” For a place in the semi-finals, Williams will meet Pliskova, who thrashed twice Grand Slam champion Garbine Muguruza 6-3 6-1 earlier on Monday. “We have had good matches. She’s beaten me on an occasion or two or three,” Williams said of her next opponent. “She’s always someone that comes out and serves big and plays well. “I’ve got to return a little bit better the next day that we play, but I will be ready. I’m ready. She’s ready. Let’s do it.”