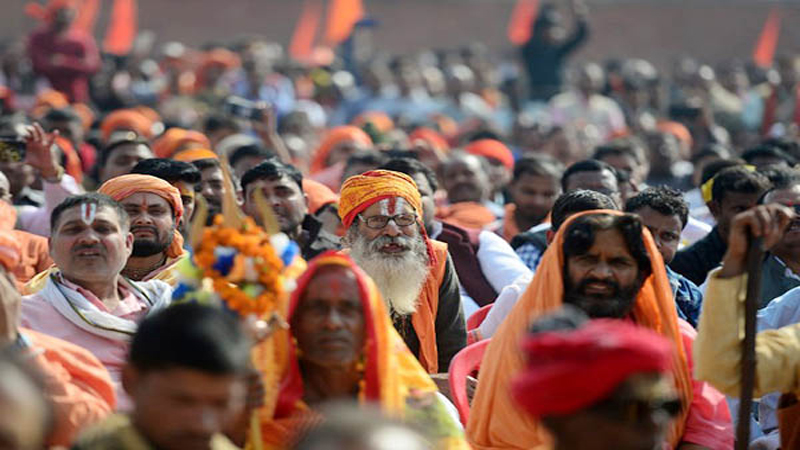 Young and unemployed, Som Shekhar pines less for a job than the construction of a controversial Hindu temple – and, as India’s election approaches, says he will vote for the only man he believes can deliver it.

“Only a Hindu government can realize the temple dream,” said Shekhar, referring to Prime Minister Narendra Modi and his Hindu nationalist Bharatiya Janata Party (BJP) that stormed to power in 2014.

Modi is asking Indians for a second term and Shekhar’s “temple dream” – the construction of a Hindu shrine in the flashpoint city of Ayodhya – could muscle its way onto the election campaign as it gets under way in coming weeks. Hard-liners have been agitating for the shrine for decades but it is a deeply polarizing project, one that has aggravated deadly fissures between India’s Hindu majority and its sizeable Muslim minority.

Temple devotees want a grandiose structure built on the ruins of a medieval mosque that was razed by Hindu zealots in 1992 – sparking religious riots that left 2,000 dead across India.

Those who tore down the Babri Mosque contend the Hindu god Ram was born on the same patch of earth, and accuse India’s erstwhile Muslim rulers of desecrating the site. A quarter century later the temple’s champions want to lay a foundation stone and see an opportunity in the 2019 election. Conservative Hindu groups have staged massive rallies – some hundreds of thousands strong – in recent weeks to pressure Modi, appealing to his “saffron” credentials and Hindu political identity. For some voters, no other issue matters.

“I agree that jobs are tough to come by. But the temple is a question of Hindu faith and it should be placed above everything else,” 24-year-old Shekhar said in Ayodhya.

Not far from the contested site, gigantic pillars embossed with decorative flowers and paving stones lie in wait, some more than 30 years old.

While the dispute over Ayodhya dates back several decades, the mass movement to build a “Ram Mandir” picked up steam in the early 1990s, helping propel the BJP onto the national stage when it was still a nascent political outfit.

After the destruction of the mosque in 1992, the site was sealed off as Hindu and Muslim groups fought in court for its control.

In 2010 a court ruled the site should be divided – two-thirds controlled by Hindus and the remainder by Muslims. But the decision was contested by both parties, and the case has stalled in the Supreme Court ever since. It was again adjourned without progress last week. A verdict would prove incendiary, and is unlikely before hundreds of millions of Indians cast ballots in the world’s largest election in April and May.

But critics fear Modi could nonetheless stoke the temple issue to appease Hindu voters, and distract from his administration’s shortcomings.

“The Ayodhya issue has always been a poll gimmick, but it has become more so this time,” said Zafaryab Jilani, a lawyer representing Muslim groups in the long-running dispute.

“They are unable to explain rural poverty, lack of jobs so they are hoping this will lead to polarization of Hindu votes.”

But Hindu hard-liners are impatient.

Some feel Modi has not done enough to raise the shrine and are urging him to use his majority in parliament to bypass the courts with legislation and get construction moving. “We have waited for too long for this,” said Shekhar, as he admired a wooden miniature of the proposed temple. Many in India fear fresh calls for a temple could turn ugly. Those who witnessed the violence in 1992 want no repeat of the arson and lynchings that pitted India’s two largest communities against one another.

For Mohammed Shahzad, a Muslim butcher from Ayodhya whose home was reduced to ash, the signs are ominous. “Political parties want to make electoral gains through this temple-mosque issue,” he said.