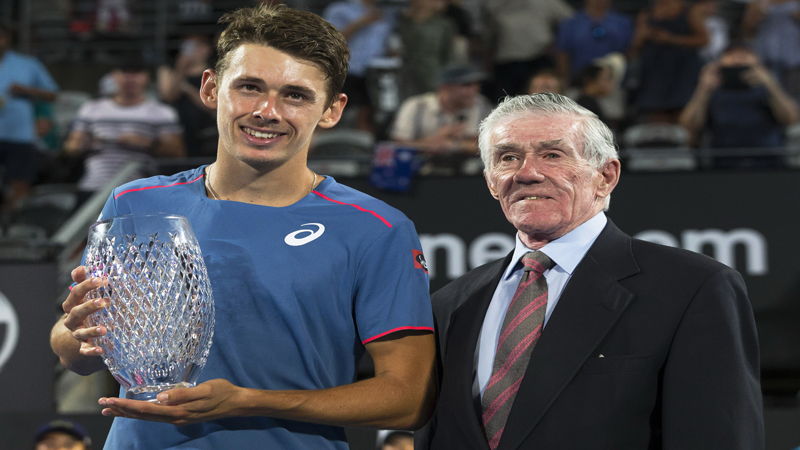 Australian teenager Alex de Minaur claimed his first career title in style when he wore down Italian veteran Andreas Seppi 7-5 7-6(5) to win the Sydney International on Saturday after his second match in five hours. De Minaur, who earlier beat Frenchman Gilles Simon 6-3 6-2 in the semi-finals, burst onto the tennis scene when he reached the Sydney final a year ago while ranked 167th in the world but lost to Russia’s Daniil Medvedev. The 19-year-old proved his burgeoning reputation as a fighter is deserved and he never looked in danger of suffering a repeat of last year’s disappointment as he became the first Australian to lift the title since Bernard Tomic in 2013.

“It’s crazy to have this actually happen. I thought it wouldn’t happen,” De Minaur said after collecting the trophy. “You guys don’t know how much it means to win in front of all of you, in front of my home (crowd).” Seppi hit 27 winners to De Minaur’s 21, but the youngster made eight fewer unforced errors and won 20 points at the net to help seal the victory, showing no signs of fatigue having earlier beaten Simon after rain washed out the match on Friday.

Boundless energy and the determination to chase down lost causes have been the cornerstones of De Minaur’s early success and he was in fine form on Saturday, recovering from losing an early break to win the first set.

There was little to chose between the two in terms of winners in opener, with Seppi edging the Australian by 14 to 13 on that score, but De Minaur’s relentlessness served him well and he committed six fewer unforced errors to take the lead. Seppi called on all of his experience to stay with the youngster in the second set, finding the lines on both wings and dropping the ball short in a bid to keep De Minaur guessing.

The 34-year-old Italian’s efforts paid off when he broke De Minaur to go 4-3 up but a poor service game allowed the teenager to break straight back and the set headed into a tiebreak. Once again, De Minaur had to come from behind but he edged the tiebreak and celebrated his victory by falling flat on his back before kissing the court. This is likely to be the last Sydney International in its current format – a tournament dating back to 1885 – with the ATP Cup starting next season.

After beating Simon in the semi-final, De Minaur criticised Australian Open organisers after failing to get his opening match at the year’s first Grand Slam pushed back. He will fly to Melbourne on Sunday ahead of his first-round match against Portugal’s Pedro Sousa on Monday afternoon. “What’s more annoying is me having to play Monday at the Australian Open and not getting helped out as a fellow Aussie at your home slam,” said the 27th seed. “I think they’re punishing Aussies for playing deep in their home tournaments and… that’s not what they should be doing.”