“With despair, true optimism begins: the optimism of the man who expects nothing, who knows he has no rights and nothing is coming to him, who rejoices in counting on himself alone and in acting alone for the good of all.”

There comes a time in the history of nations when hope takes over and the hovering shadows begin to recede to the background to be enveloped by new paradigms.

I don’t see that happening in Pakistan not because it cannot happen, but because the political elite of the country, more notably the ones who are no longer in power, are all ganged up to thwart the prospect.

One may ask why is that so, after all, because, if it actually happens, it may also be of benefit to them, and everyone else who is interested in seeing the advent of a confident, self-reliant and tolerant country that would play a constructive role in empowering its people to break the shackles of poverty and backwardness? If that were not the case, should one surmise that they would much rather keep the people captive in the tentacles of regression so that they would, forever, remain hostage to their manipulations, be subservient to their acts of cruelty and their infatuation with self-righteousness and personal glorification?

While that may well be so, there is another factor which far surpasses this and other similar considerations. This is directly related to the tactics the traditional beneficiary elite have often resorted to in ruling the country and bringing it to the verge of virtual collapse, and how, if it were to change in any manner, it would mortally dent their prospect of ever coming back into power.

Seventy years is a long time in a nation’s history, particularly through the nascent years when the foundations of a new state are laid and it begins its journey to attain a position of relevance and secure the welfare of its people. That, unfortunately, has not been the case with Pakistan as, each new government that came into power, tried to stamp its own writ on the state in an abrasive and authoritarian manner which, over time, took it further away from the enshrining principles of its creation so eloquently encapsulated in the Quaid’s address of August 11 from the floor of the first constituent assembly of the country.

A state that was envisioned to take pride in being tolerant towards its citizens irrespective of their faith, caste, colour and creed began to sink deep into the throes of radicalisation and extremism soon after its creation. And a state that was founded on the principles of equitable dispensation towards all its people as being “first, second and last citizens of this state with equal rights, privileges and obligations” divided them along the very same demarcations, and rendering them cruelly vulnerable at the hands of vigilante justice perpetrated by those it had equipped with disproportionate power and rights. The state, therefore, was divided, at its very outset, among the privileged and the lesser- and non-privileged classes. With time, the privileged dug in their heels to become the ruling elite and the lesser- and non-privileged were left to fend off others’ largesse – if and when it would be tossed their way!

The faces of the ruling elite changed, but there was no change in the manner the country was administered. It was rendered even worse when the Sharifs introduced the instrument of corruption which was used as a potent weapon to buy people’s souls and loyalties to serve their masters in return for financial gratifications. From there on, it was the pursuit of getting a hold of the state’s exchequer that held the ruling elite captive. While the Sharifs and the Bhutto/Zardaris were taking turns at looting and plundering, the state became increasingly dependent on foreign dole-outs, rendering it weaker and susceptible.

Backtracking on this critical initiative now will have catastrophic consequences – both in terms of corruption being perceived as an ailment beyond the domain of accountability, and resigning to the absence of political will and institutional capacity to tackle it. That leads to the silence of death

As a parallel note, the germs of radicalisation kept penetrating all echelons of the state. The plunge into unnecessary wars in the neighbourhood and alignments that were detrimental to the task of maintaining national sovereignty became costly ventures which made it even weaker, both internally and externally. The security-driven syndrome also contributed to the depletion of national honour, relevance and utility.

The cumulative effect over years reflected in the emergence of a state that was fragile, discriminatory, intolerant and vulnerable. Things became so bad that there were frequent questions asked about its viability and whether it would be able to survive the barrage of terror that was unleashed upon it as a consequence of the ill-advised policies it had pursued on the internal and external fronts. These were the times when the state was confronted with the hydras it had created over time as a consequence of its involvement in needless espousals.

The weakness of the ruling elite had brought the country to the verge of capitulation before the very forces which the Quaid had warned against – the forces of radicalisation, discrimination, inequality, inequity and regression. These were the venomous gifts showered on a hapless people who barely survived on the fringes, forever dependent on the whims of the corrupt and the indulgent ruling elite.

The slogan of change, when it was raised, was not a mere luxury to indulge in. It had become a necessity for the state to survive. And, it was here that the traditional beneficiary elite of the country felt threatened that if the objective were realised, they would be rendered irrelevant and their survival would be jeopardised. So, instead of becoming a partner in this quest for change and subsequent better times, they assaulted it by dubbing it a conspiracy unleashed to oust them. The military and other state institutions were unnecessarily dragged into the fray and subjected to brutal attacks of complicity and partisanship. In the face of this fractious assault, it is only a miracle that kept the state safe from any major adventurism.

But, for it to move on, the state had to be cleansed of the venom of corruption and exploitation of the marginalised. That was also the slogan raised by the torchbearers of change. With their corrupt past and performance like an open book, this was the last thing the status-quo elite could tolerate.

That is where we stand today. It is a watershed moment. On the one hand is the absolute need for continued and indiscriminate accountability, and on the other hand is the rising crescendo of protest of all factions comprising the traditional beneficiary elite.

It is time for the saner voices in the country to put their weight behind not only the process of accountability itself, but further expanding and strengthening it to the inclusion of all who have indulged in remorseless pillage. There should be no exceptions to the rule that all are equal before law and should be dealt with accordingly. It is only then that the state can be freed of the tentacles of continued exploitation and given the space to become a vibrant and equitable entity it was envisioned to being.

Backtracking on this critical initiative now will have catastrophic consequences – both in terms of corruption being perceived as an ailment beyond the domain of accountability, and resigning to the absence of political will and institutional capacity to tackle it.

That leads to the silence of death.

The writer is a political and security strategist, and heads the Regional Peace Institute – an Islamabad-based think-tank 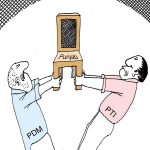 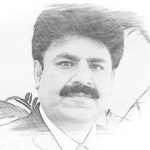