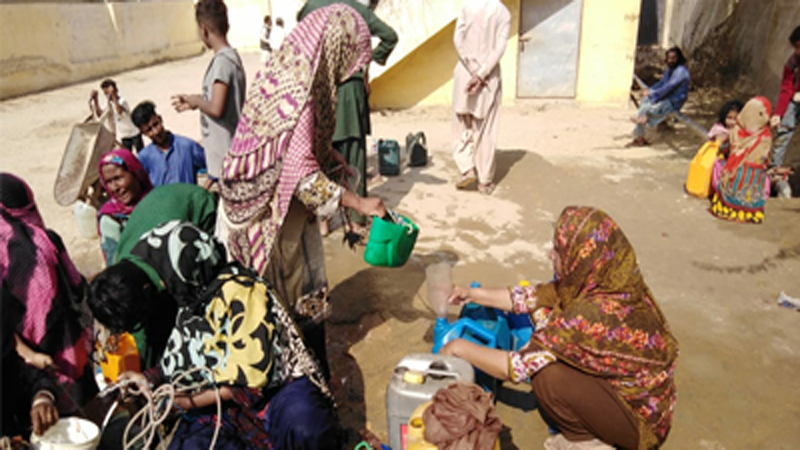 Thirty-eight year old Sakina Dablo, mother of six, a traditional fisherwoman, carrying pitcher and jerry can, spends six to eight hours every day along with her two daughters to search and fetch water for her family. Almost every woman in the neighborhood Ali Akbar Goth near Chashma village, a coastal fishermen settlement in the outskirts, is compelled to push it to the limits for survival.

Commenting on the destitution, Sakina Dablo told Daily Times: “There is no pipeline of Karachi water and sewerage board in our area, though we are one of the oldest settlement in the city and mostly our area hit by severe water shortage during sizzling summer, but this year there is no water even in winter,”

Local activist Kamal Shah pointed out the callousness of the government saying that water shortage is not new in this area and locals have been protesting for so many years; but no one is paying any attention to the protest.

Women and children spend most of the hours searching/fetching water

The social cost of water fetching is too high to be ignored given its trickling effect. Spending most of their time in search of water was obstructing the children from pursuit of education and other fundamental affairs. Most of the people in these colonies are buying water from water tankers operating there, however, poor like Dablo, are unable to buy water from these tankers.

“The women of poor families who can’t afford to buy water, are spending hours every day to search for new water sources and fetch water for families,” said Amina Bibi of the same village, adding that since children also help their mothers to bring water, so they are not attending school.

Letting the situation worsen is not a pragmatic response. “Water crisis is becoming serious in these areas and if the issue is not resolved on immediate basis, people will go for series of protests,” warned Shah.

When approached over the dire issue demanding immediate attention, Karachi Water & Sewerage Board (KWSB) said that it was the only state-run department in Karachi which provides drinking water to the entire city; Karachi needs 1100 million gallons per day (MGDs), but it gets only 650 MGD. According to an official of KWSB, Karachi has two major sources for drinking water, Hub Dam and River Indus water that comes from Keenjhar Lake, but this year due to the lack of rains, Hub Dam is running out of water.

“The suburb and outskirts are areas have no pipeline, therefore, KWSB can’t provide water to these areas,” said KWSB official.