The voice of Shaheed Bhutto lives on amongst the poor and the oppressed: Murad Shah

* Will foil conspiracies under Bilawal and Zardari’s leadership 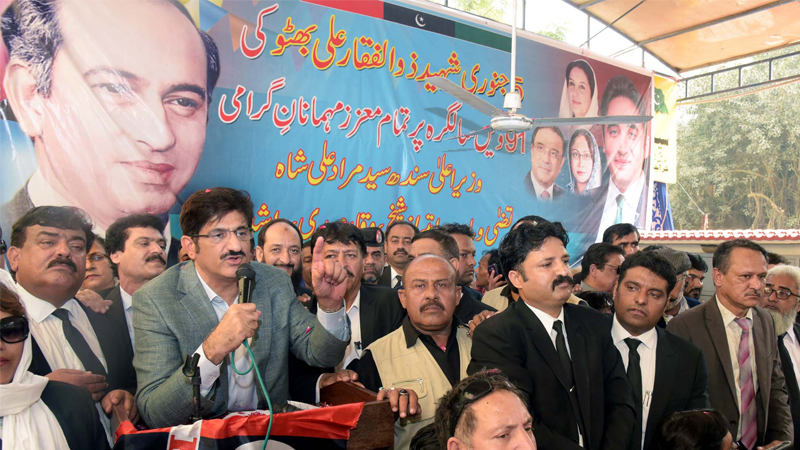 Sindh Chief Minister Murad Ali Shah on Saturday said that under Pakistan Peoples Party (PPP) chairman Bilawal Bhutto Zardari and PPP co-chairman Asif Ali Zardari leadership, they will foil conspiracies. Addressing a ceremony on the occasion of former prime minister and PPP founder Zulfikar Ali Bhutto’s 91st birth anniversary in CM house, Shah said that Bhutto was with the poor of the country. The gathering was also attended by former and sitting ministers, MPAs, advisors and special assistants of the Chief minister.

“He gave us the 1973 constitution and made Pakistan a nuclear power. We should all protect the constitution together,” he said. The Sindh chief minister further said that PPP leaders have faced numerous court cases over the years. NNI

He said that Shaheed Bhutto was a brave, courageous and a highly educated leader of Pakistan. He founded Pakistan Peoples Party with the objective to make this country a democratic state in which class system which had eaten into the vitals of this country could be eliminated. “He gave voice to the voiceless and courage to the suppressed. Though there was no powerful media in those days even then Shaheed Bhutto brought his party message to each and every person living in small and big cities and in the far-flung areas,” he said and added this was his working style and he [SZB] believed that without participation of people of Pakistan in national decisions, true national development could not be achieved.”

Mr Shah said that when Shaheed Bhutto took over power, the country was dismembered. “The people of present Pakistan were demoralized, our 99,000 people were arrested by India and India had also illegally occupied our territory in Thar,” he recalled and added Shaheed Bhutto not only inculcated confidence in his nation but with his statesmanship liberated the arrested people and also vacated the land of Thar from India where coal was being excavated these days.

Murad Shah said that it was the vision of Shaheed Bhutto that he created a secular political force in the shape of PPP which was further strengthened and vibrated by Shaheed Mohterma Benazir Bhutto. “The message of Shaheed Bhutto’s birth anniversary for party workers is very loud and clear that we should work for strengthening of democracy in Pakistan, render service for poor people and respect humanity irrespective of religion, cast and creed,” he said.

Addressing on the occasion, the chief minister said that Bhutto used to say that there were two Bhuttos- the one living in his body and soul and the other one was infused in each and every individual living in Pakistan. He said that his Quaid Shaheed Bhutto and his father Syed Abdullah Shah were practicing lawyers, therefore he has specials regards for lawyers’ community and would solve their problems on priority basis.

Murad Ali Shah said that PPP Chairman Bilawal Bhutto always appreciate lawyers’ struggle for restoration of democracy. “I am quite happy to see the lawyers in a large number attending birth anniversary of Shaheed Bhutto – this shows that he is survived by all of you,” he concluded. At the end of the program, a cake was cut to celebrate 91stbirth anniversary of Shaheed Zulfikar Ali Bhutto.