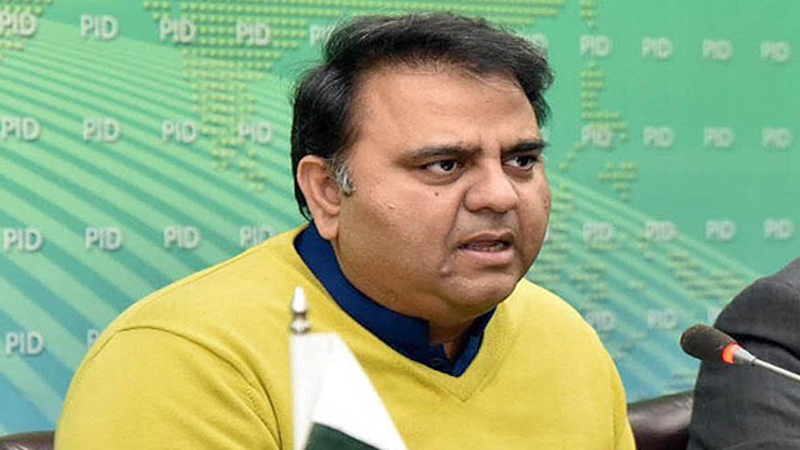 ISLAMABAD: Federal Minister for Information and Broadcasting Chaudhry Fawad Hussain said on Monday that the Pakistan Tehreek-e-Insaf government had no intention to interfere in Sindh affairs.

Addressing a press conference, he said the government did not want to impose governor’s rule in Sindh, rather it was only demanding resignation of Sindh Chief Minister Syed Murad Ali Shah because his name was mentioned in the Joint Investigation Team’s (JIT) report in money laundering and fake bank accounts cases.

He also clarified that there was no plan to abolish the18th Amendment. However, he added, the reason behind PPP co-chairpers on Zardari’s concern for 18th Amendment was that he had embezzled funds meant for the people of the province.

He said ‘everyone knew what Asif Ali Zardari and Nawaz Sharif did to Pakistan by plundering national wealth’. They had mercilessly plundered national wealth and bought properties abroad, he alleged.

The minister further said that money laundering and fake bank accounts case was registered in the year 2016, but the PPP and PML-N allegedly had a tacit agreement to ignore each others’ corruption. All their plans fell flat when Imran Khan became the prime minister following the 2018 general election, he added.

He said that the two PTI ministers had set an example by tendering resignation after charges were framed against them and Murad Ali Shah should resign following that tradition and the PPP should name a new chief minister.

He said the PPP’s provincial government in Sindh was facing pressure from inside the provincial assembly for an in-house change as their own party members of the Parliament were upset over the JIT revelations.

Fawad said for the first time in the history of Pakistan, the present federal government believed in independence of all institutions and had been providing level playing field to work independently without any interference from the government.

Regarding filing of 16 references as mentioned in the JIT on fake bank accounts, the minister said the government had nothing to do with the findings of the report. It was prerogative of the Supreme Court to discuss merits and demerits of the JIT and the government would follow instructions of the apex court in that regard, he said.

Fawad said the government wanted stability in the country but it should not be construed as that the drive against corruption would lead to instability. He said that opposition considered that action against corrupt politicians would endanger the stability of the system, but the PTI believed that purging the system of corrupt elements would bring transparency in the political system and help stabilize economy. He said that the accountability process under the leadership of Imran Khan would continue unabated.

Referring to a report submitted by the Federal Investigation Agency (FIA) in the Supreme Court regarding Asghar Khan case, he said the PTI believed it was the worst example of political maneuvering in a democratic society and PML-N leadership was involved in it.

He said that the FIA director general would brief the prime minister on that report and the PTI would give its formal viewpoint on it. However he said, FIA should not have asked for closing that case even if he had no prosecutable evidence.

To a question about inclusion of 172 accused in the fake bank accounts case, he said that the cabinet did not make a decision itself, rather it acted on the request of National Accountability Bureau, Federal Investigation Agency or joint investigation teams. He

said it was not good to have the name of a chief minister on the Exit Control List (ECL), but in the past government the then sitting finance minister used prime minster’s aircraft to escape from the country.

He said that several members on the Sindh Assembly had contacted the PTI leadership as they were frustrated over the corrupt practices of their leadership. He said that the people of Sindh would start a struggle against its corrupt ruler as they had suffered most and the PTI would support them in getting their rights.