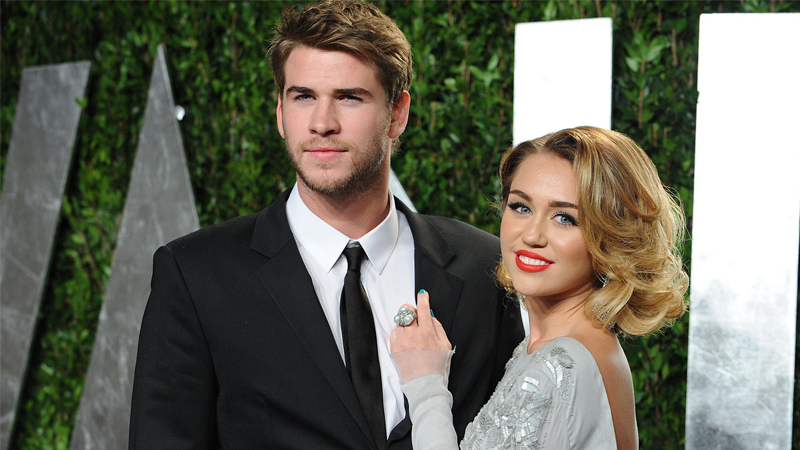 American singer Miley Cyrus and actor Liam Hemsworth finally appear to have taken that last step: Getting (somewhat secretly) married. Photos emerged on Instagram last night on friend Conrad Jack Carr’s Instagram Story of what seems to be Cyrus and Hemsworth’s very low-key wedding. Cyrus is seen in an off-the-shoulder white dress in one shot, while Hemsworth is in a tux. The two are getting ready to cut a tiered wedding cake.

“Mr. and Mrs” balloons are on display in a second story. But the gathering otherwise looks casual, with guests wearing jeans and casual clothes.

Back in March, a source told Entertainment Tonight that Cyrus was planning a very secret, spur-of-the-moment (for their guests, at least) wedding: “She hasn’t announced anything because she is being very secretive so only their friends will know and at the very last minute,” the source said then. “This time they are doing everything their own way.”

But then in August, TMZ ran a report that Cyrus and Hemsworth actually never plan to get married. “The formality of marriage isn’t important,” multiple sources explained to the outlet. “What they view as important are, they love each other, they’re happy and enjoy each other’s company.”

The engagement was enough for them, one source added then: “Their engagement back in October 2016 was a symbol of commitment, but it was enough of a symbol for them. Miley has actually said she doesn’t want to get married, despite the engagement. She doesn’t think it makes a relationship better.”

Cyrus herself said earlier this month that she’s “never loved” Hemsworth more than after he rescued their animals from the Malibu fire. Then she went on to explain why she doesn’t call him her fiancé these days. “My partner, I call him my survival partner now,” she told Howard Stern on his show. “He thinks it’s not romantic, but I learned that it is. That is why you pair up with someone, for survival.”