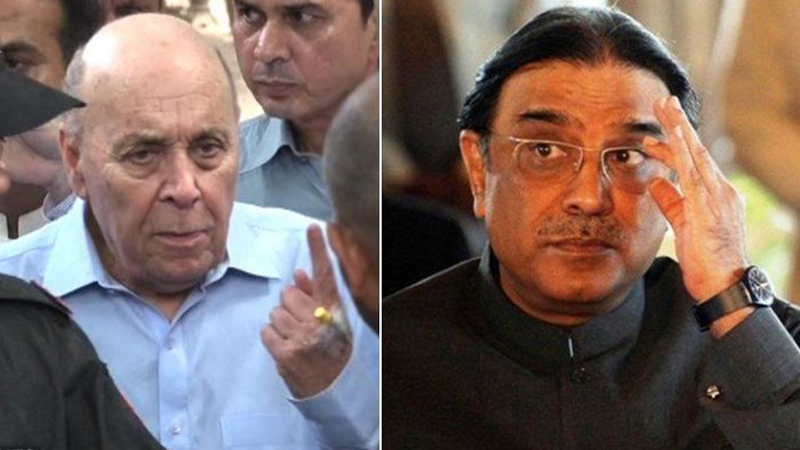 LAHORE: A joint investigation team (JIT) report submitted in the Supreme Court has held former the Zardari and Omni groups responsible in the mega money laundering and fake accounts case.

A two-judge bench headed by Chief Justice of Pakistan Justice Mian Saqib Nisar heard the suo motu case at the apex court’s Lahore registry on Monday and issued a notice to the Pakistan Peoples Party (PPP) co-chairperson Asif Zardari. The court also imposed a ban on the sale and purchase of Zardari and Omni groups’ properties. During the hearing, the chief justice remarked that expenses of the Zardari and Bilawal house were paid through companies operating fake bank accounts.

Directing that the JIT report be handed over to the respondents, the chief justice ordered Zardari’s counsel, Farooq H Naek, to submit a reply by December 31.

During the hearing, the Supreme Court played the JIT report on a projector. On December 19, the JIT probing the case had submitted a detailed report in the SC.

The JIT report stated that money was transferred through fake accounts for the construction of Bilawal Houses in Karachi and Lahore. “These companies paid for Bilawal family’s monthly expenditure of over Rs12 million,” the report added. “Fake bank accounts paid for Zardari and Bilawal’s personal expenses. Expenses for dog food at Bilawal House and 27 sacrificial goats were also paid for through fake bank accounts,” the report said. Further, the Federal Investigation Agency (FIA) requested the court to place names of all those involved on the Exit Control List (ECL). However, the top judge directed FIA officials to approach the Interior Ministry. “They will take a decision in this regard,” he said.

Earlier as the hearing went under way, the chief justice also told Zardari’s counsel, “It is a matter of billions of rupees and we will not forgive. We cannot pardon those who looted billions and are now engaging in mischief.”

Turning to Omni Group counsels Muneer Bhatti and Shahid Hamid, Justice Nisar said, “It seems that Omni Group owners are still sitting on high horses. They have looted billions of rupees of the nation and are still engaging in mischief.”

He added. “It seems that they will have to be shifted elsewhere from Adiala jail.” Justice Nisar continued, “There will be no mercy for Anwar Majid.” “You are a counsel and are taking fees. We will hear you, but we have to make a decision,” the top judge further said. Speaking to the media after the hearing, Zardari’s counsel said, “The case will be heard in Islamabad on Monday.” “The JIT has presented its report in the Supreme Court but I have not read it as yet so cannot comment,” Naek added. “We will be given the JIT report tomorrow,” he added. The FIA is investigating 32 people in relation to money laundering from fictitious accounts, including Zardari and Talpur. Zardari’s close aide Hussain Lawai was arrested in July in connection with the probe.

Over 20 ‘benami’ accounts at some private banks were opened in 2013, 2014 and 2015 from where transactions worth billions of rupees were made, according to sources.

The amount, according to FIA sources, is said to be black money gathered from various kickbacks, commissions and bribes.

A banking court on Friday extended the interim pre-arrest bail of former president Zardari and his sister Faryal Talpur till January 7 in the ongoing money laundering case.

Earlier, the JIT that has been investigating the fake accounts recommended a legal course against some 415 key individuals and around 172 entities allegedly involved in transactions of approximately Rs220 billion through 104 fake accounts.

The JIT recently observed that either the investigation would be further referred to banking courts, NAB, FIA or it was up to the apex court to decide based on the JIT findings. The report also revealed a domestic worker of Zardari, with an estimated fortune of around Rs8.1 billion stashed into one of his fake accounts. Mushtaq Ahmed, 37, who once served as one of personal staff members of Zardari accumulated the wealth with Zain Malik through a joint fake account maintained in a private bank in Karachi during 2014-15, the report stated.