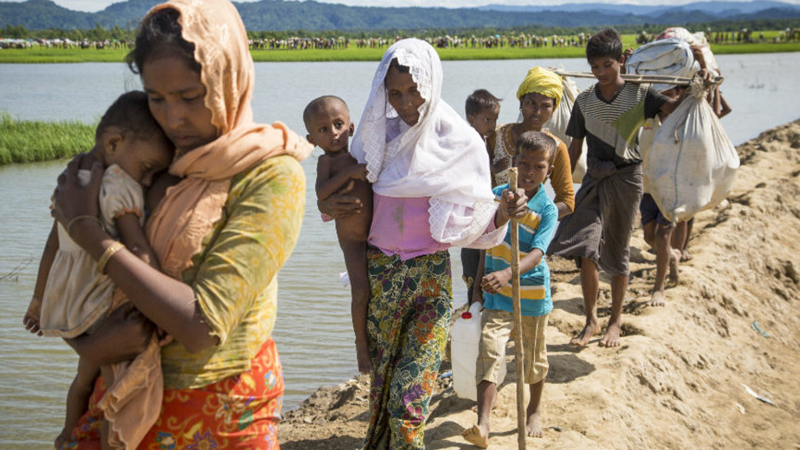 Bangladesh is viewed globally as the “epic centre” for climate disasters. The country, due to its unique location, is battered regularly by extreme weather events such as high floods and tropical cyclone disasters displacing hundreds and thousands of people annually. On top of this, the looming catastrophe of global climate impacts associated with even one-metre rise in sea level in the low-lying coastal districts of Bangladesh will make the country much more vulnerable leading it to the brink of massive disasters.

According to some projections, close to 17 percent of the country in the southern delta will be permanently flooded displacing an estimated 20 to 30 million people by 2050 or so, which is not too far away. Indeed, already a large number of people in Bangladesh have become victims of climate change and have become “climate refugees” in their own country.

There is perhaps no way that Bangladesh can handle such a huge number of climate-displaced people in the time in which it is likely to take place.

Despite evidence of increasing numbers of climate-displaced refugees in many parts of the world, very little attention was paid to this growing human crisis even at the much-celebrated United Nations Conference of the Parties (COP21) held in Paris in 2015 (also known as the Paris Agreement), which focused largely on carbon emission reduction targets and environmental issues. This was equally true for the COP22/Marrakesh (Morocco 2016) and COP23 (Bonn, Germany 2017). However, the 2018 COP24 held in Katowice, Poland, made a significant and a decisive move for the recognition of the rights and needs of “climate-displaced peoples” and offered help to climate refugees.

Delegates from many countries, including Bangladesh, India, United States (Alaska, Louisiana, Washington State), Vanuatu, Kiribati, Tuvalu and other Pacific island nations claimed that their lands, cultures, and livelihoods were threatened by the rising temperatures, higher sea levels and weather disasters, and called for recognition of rights and needs of the climate-displaced people. The COP24 in Poland approved a framework report by a task force set up to tackle the problem. The report encouraged countries to formulate laws and policies to prevent people from leaving their homes and hearth because of climate change impacts, and to help them move, resettle and minimise negative impacts if they are forced to leave.

In view of the lack of any international convention for protecting the climate refugees, the COP24 framework will be helpful in that the vulnerable communities can now seek both legal and political protection to ensure safer migration and resettlement. Furthermore, the two new UN Global Compacts signed by 160 nations in September 2018 recognised climate-driven migration for the first time — one on safe, orderly and regular migration, and one on refugees-offer critical opportunities to help and ensure safety, dignity and lasting solutions for those who are displaced or at risks due to climate impacts.

For Bangladesh, in addition to sea level rise and its consequences, there are other impacts as well. For instance, the loss of land due to permanent flooding means that less land would be available for people to grow food — a calamity of much higher proportion for this already overcrowded country of 160 million people. At the same time, the northwestern region will likely be affected by drought creating untold misery — including food security and agricultural production; both fishery and forestry will likewise be immensely affected. Furthermore, a wide-ranging adverse impact on human health and well-being may lead to increased illness and death while many infectious diseases, including malaria and dengue may be on the rise. In sum, the risks and impacts are multi-dimensional.

Climate impacts will also force people now living in the coastal areas and the floodplains, including those displaced by riverbank erosions, to become climate refugees. Displacement caused by sea level rise is already happening, but it may not be as apocalyptic as thought some 20 years ago. In recent years, the numbers of people displaced by floods and riverbank erosions have reportedly been very high — an estimated 10 million over the last decades. Although flood and erosions are nothing unusual in Bangladesh, climate impacts have further threatened and made floodplain communities more vulnerable and “victims” of climate change. The loss of ancestral homes, lands and livelihoods epitomises the human costs and the grave injustice of climate change, for those least responsible are bearing the brunt of the impacts with little or no resources or help to cope with the new realities.

Where do the climate-displaced people go or end up? In Bangladesh, the most popular narrative is that the climate-displaced people migrate to cities like Dhaka and join the ever-growing slums. A second view is that some definitely do migrate to cities, perhaps around 10 percent of the displaced people, including those who migrate for better livelihood opportunities or economic migrants. Therefore, rural-urban migration is not necessarily driven by climate impacts. Third, a vast majority of those displaced remain within their own localities, as reported in some recent research, and adapt to the changing situations with support from extended families and kin groups. Finally, cross-border migration between neighbouring countries has also been reported in some studies.

Thus, at this point, there is apparently lack of enough data at the community level for better understanding of the displacement risks people face and options available to them so that more effective solutions can be crafted. The UN Global Compact may help people uprooted by climate impacts; these policies are, however, in their infancy and implementation may be too slow to resolve the scale and magnitude of the problems people and communities are facing on the ground in Bangladesh today. Therefore, as noted earlier, actions and commitments at the global level must be matched and supported by national and local level responses in reducing displacement and migration in the context of climate change.

In Bangladesh, a solid national adaptation plan is under implementation, which involve strategies of adaptation as central element to climate change. Since displacements linked to climatic forces are already happening in Bangladesh, mobility, migration and resettlement should also constitute key responses to climate disasters, particularly planned preventive resettlement of populations at risks of disasters. Otherwise, the issue of climate change refugees will remain hidden between the lines of the current national adaptation policy.