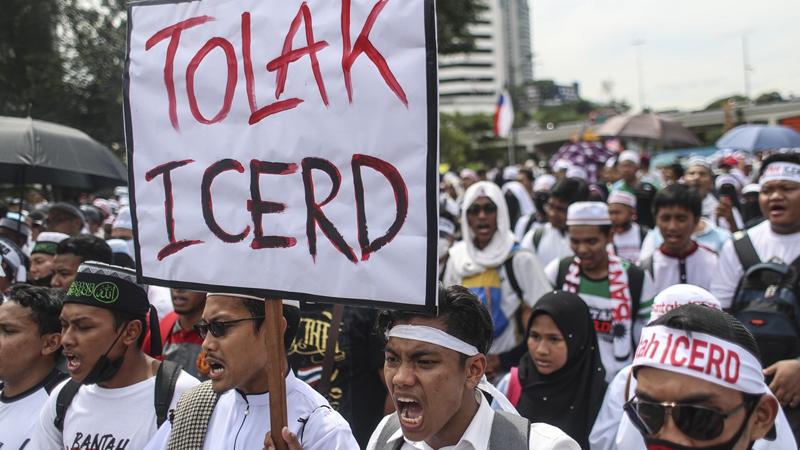 On December 8, in Malaysia’s biggest rally this year, 80,000 people gathered in Kuala Lumpur to protest against what many alleged were grave threats against the country’s dominant Malay community. Some estimates say the numbers eclipsed the crowds during the historic general elections in May, which resulted in the first regime change since Malaysia’s independence more than 60 years ago.

Last weekend, the mostly ethnic Malay-Muslim crowds blocked several major city thoroughfares to hear leaders from the opposition Islamist party PAS and the former ruling party Umno (United Malays National Organisation) rail against the new federal government. The speakers and the banners of this “Himpunan 812” rally reflected a deep anxiety about the “new Malaysia”, and warned against the threats facing the country’s majority Malay community, ostensibly through ratifying the United Nations’ International Convention on the Elimination of Racial Discrimination (ICERD).

Controversy over ratifying ICERD has been building since it was raised by Prime Minister Mahathir Mohamad and foreign minister Saifuddin Abdullah at this year’s UN General Assembly. The opposition has mounted a potent fear campaign over the convention’s alleged threats against Malay and Muslim rights enshrined in Malaysia’s constitution.

With Mahathir’s Pakatan Harapan government struggling to meet the huge expectations of promised reforms to address stagnant wages and soaring costs of living, and the government’s first budget constrained by Malaysia’s lacklustre economy, the euphoria over regime change has vanished and the government’s foes have stoked old anxieties over race and religion.

For a once-dominant party like Umno, the rally was its biggest opportunity to vault back into relevance amid ongoing legal troubles and outrage over the multibillion-dollar 1MDB scandal, centred on former prime minister Najib Razak, his wife Rosmah Mansor, and other top party leaders now mired in corruption charges. For PAS chief Hadi Awang and his conservative clerics, the rally was another opportunity for the party to claim an exclusive Malay-Muslim leadership beyond its stronghold of two small northern states.

Although the new government wasn’t shaken by the rally, it needed to be stirred into greater urgency in addressing yawning income inequality, said Associate Professor Marzuki Mohamad of the International Islamic University Malaysia. Marzuki, a long-standing confidante of new Home Minister Muhyiddin Yassin — and Muhyiddin’s political secretary when he was deputy prime minister, before his sacking by Najib — said many of those he met demonstrating last Saturday were more worried about their jobs and the soaring cost of living.

He said the Pakatan Harapan government has had a steep learning curve, and “not all ministers are performing yet, as good governance is hard”.

“People wanted to see immediate results when PH took over because expectations were so high,” Marzuki said. “All those revelations of the previous government’s corrupt practices, six months of that is enough. People are now asking ‘what do you want to do with government?’, ‘what is the government doing to alleviate problems like the very high cost of living?’.

“[People have accepted the previous government] was corrupt. New revelations don’t mean much now, as people want to see what the new government is going to do now to help them live a better life. Good thing there’s another four years to get this happening.”

The contest for a “new national narrative” to explain the “new Malaysia” was well underway, Marzuki said, and it belied the Malay-language opinion columns in the still Umno-controlled mainstream media that defended the rally’s Malay-Muslim agenda while showing disdain for the multi-ethnic secular government.

A prominent member of Anwar Ibrahim’s inner circle, Eekmal Ahmad, urged the government to seize this opportunity to craft a new inclusive “national narrative”, to not resile from the “national struggle”.

He echoed Anwar — whom Mahathir has declared will be the next prime minister — in proposing a “Harapan [hope] narrative that wasn’t liberal Kuala Lumpur, not socialist, and not an ethnic chauvinist or religious narrative … And it includes Sabah and Sarawak, not a question of the peninsula alone.”

Although the social media campaigns promoting the Himpunan 812 rally prominently linked last Saturday with the Indonesian “Aksi 212” (Action for Defending Islam) demonstrations two years ago, which drew more than 200,000 people to central Jakarta, the context was not the same, said National University of Malaysia researcher Hew Wai Weng.

A specialist in Southeast Asian Islamist movements, Hew said Saturday’s rally was a “realignment of both old and new politics in post-GE14 (14th General Election) Malaysia”, which was still in flux as new multi-ethnic politics had yet to be established. The key group behind Saturday’s “narrative” was ISMA, a non-government organisation that shot to prominence during the Najib government, which is advocating for a Malay and Muslim supremacist agenda known as “Ketuanan Melayu”. “The political contestation is not only between the so-called liberal and conservative, but also among the conservative groups, between those who are more inclusive and those who are less so,” He said, after interviewing rally-goers. “The elements of Islamism and Malay nationalism don’t exist only among the opposition groups but also within the new government.

“With such competition as a background, the aim of Himpunan 812 was to shape Malay-Muslim opinions and swing back support to a PAS-Umno-ISMA coalition. The rally was less about ICERD and more about framing the PH government as anti-Islam and anti-Malay.”

But this almost unrelenting focus on Peninsular Malaysia’s religious and ethnic divisions obscures what has become a critical part of “new Malaysia” politics, which is the role east Malaysian states Sabah and Sarawak played in winning government for Pakatan Harapan. These states are fundamental to this “national narrative”, said Vilashini Somiah, the research chief at Malaysian think-tank IMAN.

“Many Sabahans don’t feel they’ve been properly acknowledged, and this gives rise to growing demands to revisit the MA63 agreement [the foundational document which created Malaysia in 1963] between Sabah, Sarawak and peninsular Malaya. There’s a huge issue with trust and unity, a major disconnect we need to address in these debates over Islamisation and Malay-isation,” Vilashini said. In an uncertain nation buffeted by old anxieties over race and religion, exploited by politicians adept in social media velocity, many Malaysians want their “new Malaysia” sooner rather later.