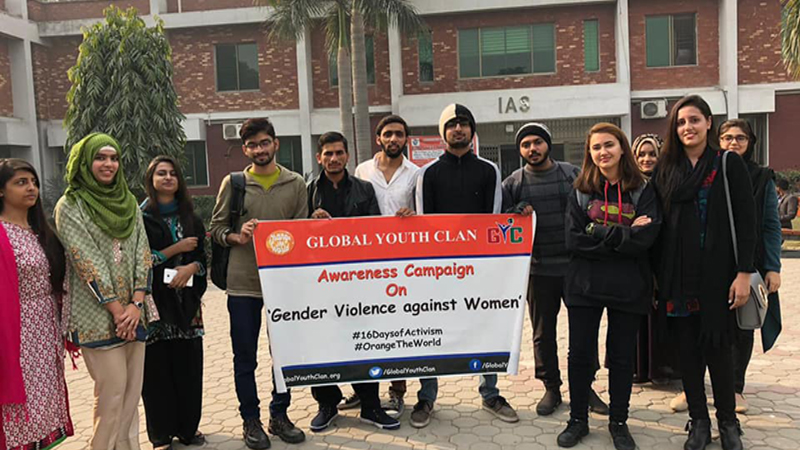 The 16 Days of Activism campaign, annually commemorated worldwide, commences on 25 November, the International Day for the Elimination of Violence against Women, and lasts until 10 December, the Human Rights Day.

Global Youth Clan an organization from Pakistan which stands for the Gender Equality and strive to aware the youth about the Fundamental Rights of Women.They organized several Campaigns &Awareness Walks on Gender-Based Violencein different Universities of Pakistan including, University of the Punjab Lahore, Institute of Modern Arts & Science Hyderabad, Superior University Lahore and Mehran University of Engineering and Technology Jamshoro.

Women and girls from all corners of the world continue to experience violence and abuse because such acts are often overlooked and invisible to many, the survivors are routinely shamed into silence. Tragically, violence against women and girls is mainly perpetrated by men close to them, such as intimate partners and family members. In addition, violence is taking an increasing number of forms – ranging from verbal and sexual harassment in the streets to domestic violence and femicide in the worst-case scenario.

“It is our core responsibility to educate our youth about Fundamental Rights of Women & Courage to oppose Gender Based Violence in Society.” – Tahir Khattak, Chairman GYC.