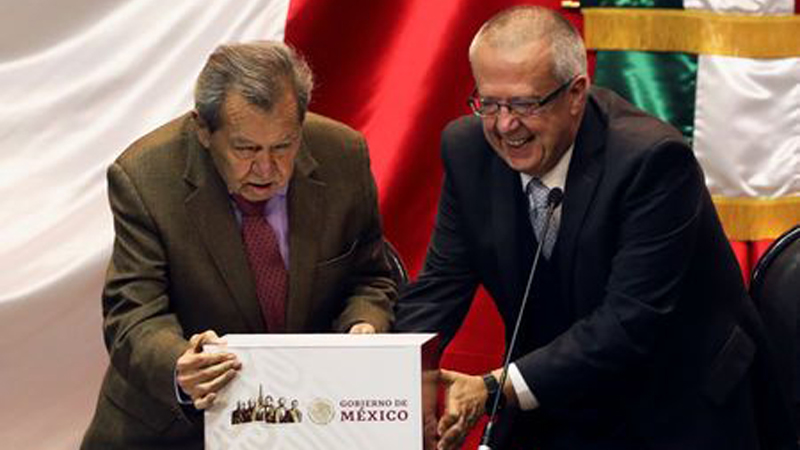 The first budget presented by Mexico’s new leftist government met with a positive initial response from financial markets on Sunday with banks describing the plans to keep a lid on spending as credible and helpful to investor sentiment.

Mexico’s peso rose against the dollar in Asian trading after Finance Minister Carlos Urzua unveiled the budget on Saturday evening, pledging to find more money for both the elderly and unemployed youngsters by slimming down several government ministries, and in expectation of higher tax revenues.

He also vowed to run a larger budget surplus, excluding interest payments on debt, than Mexico did last year.

The budget is a major test of President Andres Manuel Lopez Obrador’s economic credibility, which was shaken when he said on Oct. 29 he was scrapping a partly-built $13 billion new Mexico City airport on the basis of a referendum that was widely panned as illegitimate. Rating agency Fitch warned it could downgrade the country’s creditworthiness after the decision.

Lopez Obrador took office on Dec. 1, and much of the new spending covers pledges made during the election campaign.

Still, analysts at Citi said the spending promises were below consensus forecasts, calling the budget a “positive surprise” for the market.

“Rating agencies will be kept at bay for at least the next six months or so, as it would take meaningful slippage versus the plan to trigger downgrades,” they said in a research note.

The peso strengthened by 0.8 percent against the dollar in early Asian trading.

Raul Feliz, an economist at the CIDE think tank in Mexico City said markets could take heart from the fact that “there’s no really crazy stuff” in the budget.

Due to be approved by Congress before the end of the year, the plan forecasts a slight slowdown in economic growth to about 2 percent next year from an estimated 2.3 percent in 2018.

The package also targets a 2019 primary budget surplus – a figure which strips out payments on existing debts – of 1 percent of gross domestic product (GDP). That compares with a 0.7 percent primary surplus estimated for 2018.

Still, markets are likely to monitor the progress of the budget closely to see if Urzua can meet his targets and how he reacts if his revenue projections prove unrealistic.

Some analysts expressed the view that the budget’s forecasts for economic growth, oil output and the exchange rate looked optimistic.

Others said Urzua was underestimating a hit to revenues from a proposal to halve value-added tax (VAT) in Mexico’s northern border region.

Investors soured on Lopez Obrador following his announcement cancelling the airport, dumping Mexican bonds, stocks and the peso. He argued the project was too costly and tainted by corruption, though he has not produced evidence to support this.

Since then, the government has been trying to craft a deal with the holders of bonds that were issued to finance the airport. Although the two sides have been moving closer, the dispute remains a factor of uncertainty, said the CIDE’s Feliz.

On Sunday, Mexico declined to further sweeten an offer to buy back almost a third of the airport bonds.

Markets are also keeping tabs on the financial health of heavily-indebted state oil firm Petroleos Mexicanos, or Pemex, which Lopez Obrador has pledged to revive.

To find extra cash, the plan prescribes budget cuts to ministries including agriculture, transport and environment.

Others facing belt-tightening measures are state governments, Congress and the courts, with which Lopez Obrador has been at odds since the Supreme Court this month froze a law mandating public sector pay reductions.