‘Underperforming’ ministers will have to go home: Imran 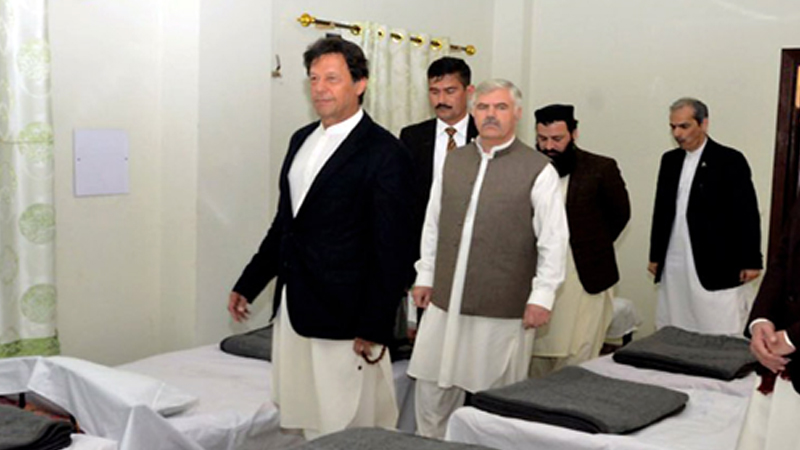 PESHAWAR: Prime Minister Imran Khan Friday told the ministers to discharge their constitutionally mandated duties diligently or be prepared to be replaced.

“People will beat you (elected representatives) if you failed to come up to their expectations … they (people) will not accept any lame excuses that bureaucracy didn’t let you work,” the prime minister said while addressing a ceremony marking the completion of first 100 days of the Khyber Pakhtunkhwa (KP) government.

The prime minister said he will come to know which ministers don’t spend full time at their offices, warning that those found violating the established rules would be sent packing. “And then none of you should say ‘my ministry was taken away from me’ [if you are replaced for not going to work],” he cautioned.

In a lighter vein, Imran Khan said previous governments always used to be afraid that if a minister is removed, he or she will form a forward bloc and the government will be toppled. “We don’t even face that issue now,” he added, amidst laughter from the audience.”Keep in mind, I am receiving messages from a lot of MPAs who all want to become ministers, so if you don’t work, be ready to be replaced,” he said tongue in cheek while addressing the ministers.

In an indirect reference to Pakistan Muslim League-Nawaz (PML-N), he said the previous government spent billions in Punjab in the name of development in order to secure more seats in the 2018 general election. However, the Pakistan Tehreek-e-Insaf (PTI), he maintained, secured people’s mandate in the last general election without spending billions of rupees on so-called development projects in KP. Thanking the people of the province for reposing confidence in the PTI, he said his party didn’t employ traditional or political tactics to win the polls.”In 2013 [elections], we formed a coalition government and in 2018, the people of Khyber Pakhtunkhwa who have never given second chance [to any political party] gave the PTI a fantastic mandate,” he said

Imran Khan said it was for the first time that his government was working to introduce a uniform education policy in the country, which would help bridge the gap between rich and the poor. He said the first 100 days plan of his party was aimed at facilitating the poor segments of the society. He directed officials and bureaucrats to work in tandem with the elected representatives to facilitate the people whatever way they can.

Earlier, the prime minister inaugurated shelter homes in the provincial capital that have been built by the KP government as part of its first 100 days plan. The homes would have the capacity to accommodate more than 400 poor and deserving persons.