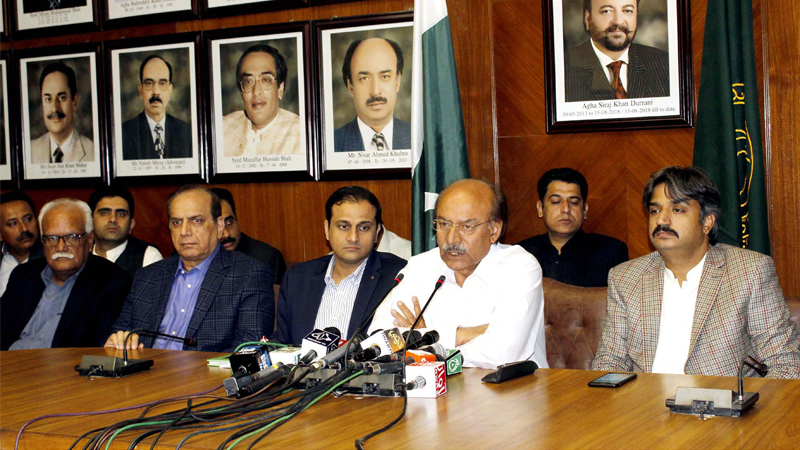 Referring to the ongoing disruption in gas supply, the officials said that the people of Sindh were being discriminated against. They said that the ruling party Pakistan Tehreek-i-Insaf (PTI) had made tall claims before springing into power but now, instead of dispensing justice and upholding the rule of law, it was committing a flagrant violation of Article 158 of the Constitution.

The ministers criticised the PTI and said that either the party was incompetent or it was knowingly deviating from the Constitution. They urged Prime Minister (PM) Imran Khan not to force the people of Sindh to take to the streets for their demands. They further said that the government of Sindh had already taken up with the matter with the federal government and was also in constant touch with the stakeholders.

Sindh Energy minister Imtiaz Ahmad Shaikh said that they had conveyed Sindh’s stance to federal government. ” We would record our protest on every forum available to us,” he said. “Despite promises of the federal government, the gas supply has been discontinued,” he lamented. He demanded that PM Khan take immediate notice of situation and issue directives for restoration of gas supplies. He said that Sindh had no representation in oil and gas regulatory authority and the province was not consulted while power agreements were being chalked.

Transport minister Owais Qadir Shah said that public transport had been badly affected by the closure of CNG stations. He added that one lack people were unable to reach their destinations or go to work because of suspended gas supply. Provincial advisor Barrister Murtaza Wahab said that the Pakistan Peoples Party (PPP) believed in respecting the Constitution of Pakistan and every article mentioned in the constitution was important. He added that people of Pakistan could not be served until implementation of every article was not ensured. “Prior to coming to power, PTI made tall claims of rule of law but after coming to power PTI proved through its actions that the Constitution did not hold any value for it,” said the advisor. He further said that suspension of CNG was a sheer violation of Article 158 of the Constitution.

Barrister Wahab said that Sindh was producing 70 percent of the country’s gas and according to the Constitution, the province had the first right on its resources but the federal government was repeatedly violating the rights of people in Sindh. “In summers, there was frequent load shedding in the province and now during the winters, we have no gas,” he said. He said that the ruling party was unaware about responsibilities of the federal government. “Prime Minister talks in the morning and takes a U-turn in the evening,” said Barrister Wahab.