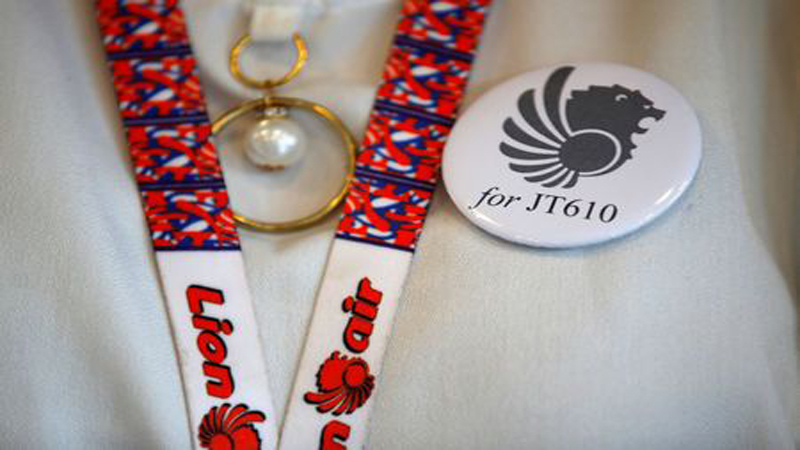 Families of some of the 189 people killed in a Lion Air plane crash plan a protest rally in Indonesia on Thursday, while stalled efforts to bring the main wreckage to the surface and find the second black box are set to resume next week.
The Boeing Co 737 MAX jet crashed into the Java Sea on Oct. 29 shortly after take-off from Jakarta, but the families expressed concern that the remains of 64 passengers have yet to be identified, with just 30 percent of the plane’s body found.

“The relatives hope that all members of our families who died in the accident can be found and their bodies buried in a proper way,” a group that says it represents about 50 families said in a statement.

“We hope the search for the victims will use vessels with sophisticated technology,” it added, ahead of the rally planned for outside the presidential palace in Jakarta.

Lion Air is paying for a specialised ship to help lift the main wreckage of flight JT 610 and give investigators a better chance of finding the cockpit voice recorder (CVR) in a search that has lacked sophisticated equipment for the last month, Reuters reported.

Indonesia’s national transport panel said the vessel was due to arrive on Monday.

The enhanced search will cost $2.8 million for the first 10 days, a source close to the airline said on Thursday, on condition of anonymity, adding that Lion Air is paying because the government does not have the budget.

A spokesman for Lion Air was unable to respond immediately to a request for comment.

“Funds for the CVR search will be borne by Lion Air which has signed a contract for a ship from a Singaporean company,” a finance ministry spokesman told Reuters.

Lion Air’s decision to foot the bill is a rare test of global norms regarding search independence, as such costs are typically paid by governments.

In this case, investigators said they had faced bureaucratic wrangling and funding problems before Lion Air stepped in.

Safety experts say it is unusual for one of the parties to help fund an investigation, required by UN rules to be independent, so as to ensure trust in any safety recommendations made.

There are also broader concerns about resources available for such investigations worldwide, coupled with the risk of agencies being ensnared in legal disputes.

The clock is ticking in the hunt for acoustic pings coming from the L3 Technologies Inc cockpit voice recorder fitted to the jet. It has a 90-day beacon, the manufacturer’s online brochure shows.

The flight data recorder was retrieved three days after the crash, providing insight into aircraft systems and crew inputs, although the cause has yet to be determined.