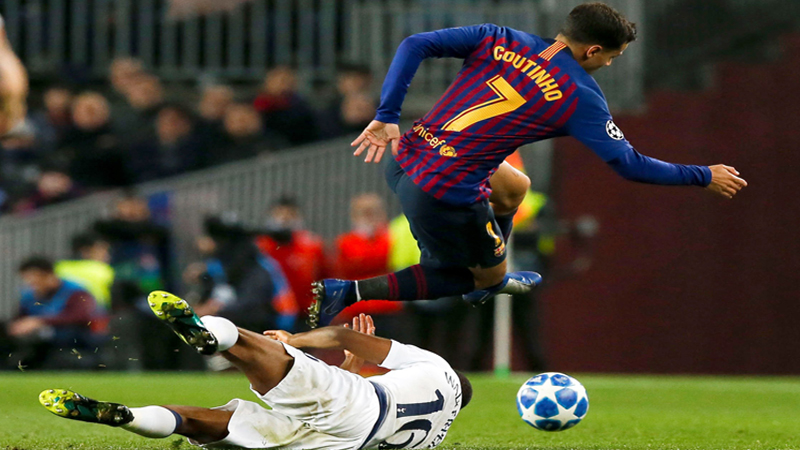 BARCELONA: Tottenham Hotspur produced a bold and spirited performance, coming from behind to grab a 1-1 draw at Barcelona which saw them finish second in Champions League Group B and reach the last 16 at the expense of Inter Milan on Tuesday. Spurs were facing a much-changed Barca side who had already qualified in first place and started without talisman Lionel Messi but they fell behind to an astonishing run and strike from Ousmane Dembele in the seventh minute. Tottenham dominated much of the game but were repeatedly denied by outstanding saves from Barca’s reserve goalkeeper Jasper Cillessen before pulling level when Lucas Moura turned in a Harry Kane cross from close range in the 85th minute.

Danny Rose spurned a glorious chance to give Spurs the win but they squeezed through to the knockout stages thanks to Inter Milan drawing 1-1 at home to already-eliminated PSV Eindhoven. It meant both teams finished with eight points but Spurs qualified due to their superior head-to-head record. Barcelona, who equalled Bayern Munich’s Champions League record run of 29 home games without defeat, were runaway winners of the group on 14 points.

The result capped a fine comeback in the group from Spurs, who had taken only one point from their opening three games in the campaign and looked dead and buried after conceding late in a 2-2 draw at PSV in October. “I’m so happy, so proud, I remember that after PSV, no-one believed in us, it was mission impossible, but we are here, we’re in the next round,” Spurs coach Mauricio Pochettino told a news conference. “It’s a massive achievement for the club, we’re happy for the fans here and around the world, it’s a massive boost for the club and to be able to play in the knockout rounds next year in the new stadium is a massive motivation for us.”

To guarantee a knock-out place, Tottenham needed to become the first team since Bayern Munich in 2013 to win at the Nou Camp in the Champions League and were encouraged by Barca coach Ernesto Valverde making seven changes from Saturday’s 4-0 win at Espanyol. Messi was the most prominent of the absentees although he came on in the second half, while first-choice keeper Marc-Andre ter Stegen, crucial left back Jordi Alba and key defender Gerard Pique were left out along with injured striker Luis Suarez.

Dominant start: Pochettino’s side made a dominant start but were shredded on the counter-attack by the sheer pace and skill of Dembele, who robbed Kyle Walker-Peters in his own half, dashed past him and dribbled past another defender before smashing into the net. Dembele was a surprise inclusion in the Barca side after turning up two hours late to training on Sunday but repaid the lenience of Valverde with a mesmerising display down the right wing. Son Heung-min was denied by the legs of Cillessen in the first half and the Dutch goalkeeper continued to thwart the visitors until Moura found a way through, sparking jubilant scenes from the sizeable contingent of away supporters.