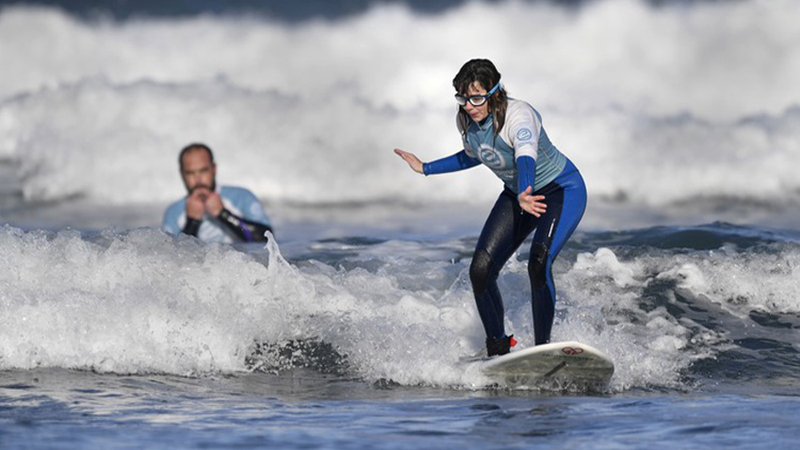 SALINAS: Carmen Lopez can only imagine what the sea looks like, but the blind 21-year-old Spaniard is in her element riding the surf. Guided by instinct and signals whistled by her coach, Lopez has been training hard to become Spain’s first blind female athlete to enter the World Adaptive Surfing Championship in La Jolla, California, on Wednesday. “The sea is where I feel peace and freedom, as if it were where I’m supposed to be,” she said sitting on her surfboard after an hour and a half of wave-riding practice in the Bay of Biscay in northern Spain. “I’m not different from other surfers,” said Lopez, who was born with congenital glaucoma and lost her vision completely when she was a child. In its fourth edition, the La Jolla event for surfers with disabilities features its first team competition for visually-impaired female athletes, with Lopez representing Spain. Blind surfers such as Lopez’ countryman Aitor Francesena or Brazilian Derek Rabelo have achieved legendary status in the sport, and Lopez, who only took up surfing a few months ago, is aiming high. After the La Jolla tournament, organised by the International Surfing Association (ISA), Lopez aims to compete in the 2024 Paralympic Games in Paris. ISA has been campaigning to make adaptive surfing a Paralympic sport.

Lopez has also practised figure-skating and horse-riding and her coach and friend Lucas Garcia praised her natural balance and instinct. Garcia, who swims next to Lopez when she surfs, is her ‘eyes’ when it comes to telling her about a wave coming up. “A single whistle means the wave is coming on her right side, and a double whistle, on her left side,” he said, likening the signals to the way dolphins communicate.Lopez wants to encourage others with disabilities to challenge their limitations, live a full life and perhaps try out radical sports.