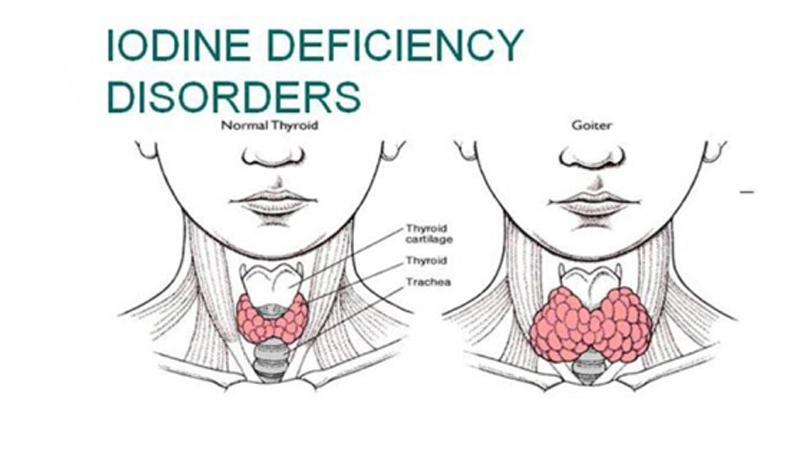 Iodine deficiency is still a considerable health issue in Pakistan even after decades of efforts to address the problem. Iodine is a most essential trace mineral, which is required for the production of thyroid hormone. Iodine deficiency may result in goiter, swelling in the neck, hypothyroidism, unexpected weight gain, fatigue, weakness, dizziness, hair loss, dry flaky skin, miscarriage, stillbirth, congenital anomalies, infant and neonatal mortality, and impaired mental and physical growth.

Adequate thyroid hormone is very essential and critically important for normal growth and neurodevelopment in fetal life, infancy and childhood. Iodine deficiency is considered the major leading preventable cause of intellectual deficits. In Pakistan more than one third of population remains at risk for iodine deficiency especially in mountainous areas, including upper Punjab, all rural areas of Khyber PakhtunKhwa, Naran, Kaghan, Balakot, Hazara, Waziristan, Kashmir and northern areas of Pakistan.

First time in 1908 northern Punjab and hilly areas of KPK marked as iodine-deficient areas, where a high goiter prevalence and iodine deficiency has been reported significantly. In Pakistan children and women in pregnancy are considered as the most affected group for iodine deficiency because more iodine is needed throughout the growing age and during pregnancy.

Pakistan formally adopted the universal salt iodization programme in 1994. These efforts resulted in a decline of iodine deficiency, but the country is still struggling to deal with this important health issue. The major reasons for this are lack of proper planning, low health budget, lack of political will, lack of monitoring system, lack of public awareness and as well as myths regarding iodized salt.

About 40 percent of population is still reluctant to use iodized salt, they won’t allow their families to consume what they call “mixed salt,” believing it causes infertility. The majority amongst them are well educated businessmen and religious people. Pakistanis of all classes have been hearing about the alleged dangers of iodized salt for nearly two to three decades. In fact, insufficient iodine in the diet can cause spontaneous abortion, stillbirth, goiters, mental retardation, birth defects and other developmental problems. Surely, I blame iodine related infertility rumours in our society, at least in part, for this massive health crisis.

About 40 per cent of population is still reluctant to use iodized salt, they won’t allow their families to consume what they call ‘mixed salt,’ believing it causes infertility

How did this happen? Some experts and professionals see little mystery in the evolution of what has become one of Pakistan’s more bizarre, longer running and destructive conspiracy theories. 22 years ago, well-meaning government officials launched a maternal health initiative in the face of ever-rising birth rates. To this day, people remember a slide show aired on Pakistani Television Network (PTV), at that time the country’s only channel, that pushed prenatal care and awareness of vital nutrients. The second last slide of the slide-show promoted one element in particular –iodine. The final slide, officials of the event recall, credited the resourcefulness and initiative to the government’s department of primary health and family planning.

“There was a big communication mistake people thought these last two slides were purely for family-planning initiative.”

After the public conflated iodine with government-enforced birth control, rumours took off about an international scheme to limit Muslim population growth in the world through iodized salt.

The falsehoods, tales and lies became especially potent in a society, which has majority of large families and where contraception use is very low. By 2001, a mere 17 percent of Pakistani households used iodized salt, UNICEF reported, compared with Bangladesh, where the consumption rate was 78 percent.

Pakistan’s health crisis regarding iodine deficiency isn’t just the fault of rumours, the country’s soil is already deficient in iodine because of flooding and erosion. In areas where there is little iodine in the diet, typically remote inland mountainous areas, arid and semi-arid areas, where no marine foods are eaten, iodine deficiency gives rise to hypothyroidism, signs and symptoms of which are extreme fatigue, dizziness, goiter, mental slowing, depression, weight gain, and low basal body temperatures.

However, when body is low in iodine, it can’t make enough of them. To compensate and reimburse, the thyroid gland works harder to try to produce more. This causes the cells of thyroid gland to multiply and grow; eventually this situation leads to a goiter.

Surprising weight gain and unexpected obesity is another sign of an iodine deficiency. Low iodine level is a major cause to of slow metabolism as it encourages food to be stored as fat, rather than be burned as energy. This may lead to weight gain. Fatigue, tiredness and weakness are also a common symptoms of an iodine deficiency. Low iodine levels may leave an individual feeling tired, sluggish and weak. This is because body needs the mineral to make energy.

Thyroid hormones help control the growth of hair follicles. When thyroid hormone levels are low, hair follicles may stop regenerating. Over time, this may result in hair loss. Dry, flaky skin may occur with an iodine deficiency, as the mineral helps our skin cells regenerate. It also helps body sweat and hydrates skin cells, so an iodine deficiency can cause an individual to sweat less.

Pregnant women are at a higher risk of having iodine deficiency. This is because they need to use enough to meet their own daily requirements, as well as the needs of their growing baby. The increased need for iodine continues throughout lactation period, as babies receive iodine through breast milk. Not using enough iodine throughout pregnancy period and lactation may some cause side effects for both the mother and baby. Mothers may suffer from signs and symptoms of an underactive thyroid, such as a goiter, weakness, fatigue and feeling cold.

Heavy bleeding and irregular menstruation cycles can also occur as a result of an iodine deficiency. Like other most symptoms of iodine deficiency, this is also related to low levels of thyroid hormones. In one research, 68 percent of women with low thyroid hormone levels suffered from irregular menstrual cycles, compared to only 12 percent of healthy women.

We should keep in mind that there are very few good sources of iodine in our routine diet. This is the basic and major cause why iodine deficiency is common worldwide. The recommended daily intake is 150 mcg (micrograms) per day. This quantity should meet the needs of 97 to 98 percent of all healthy adult population.