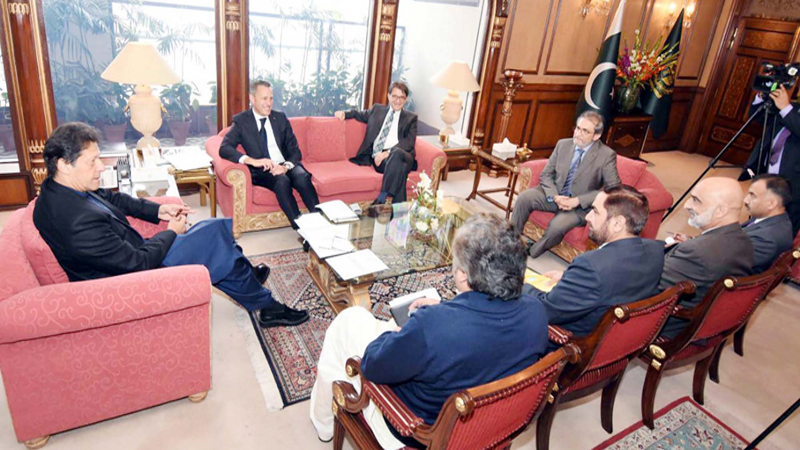 ISLAMABAD: Prime Minister Imran Khan on Tuesday said that the government was determined to provide an enabling atmosphere to investors in order to take the advantage of existing opportunities in various sectors.

The prime minister was exchanging view with Executive Vice President Central Asia Region of ENI, Italian multinational oil and gas company, Luca Vignati, who called on him here in Islamabad.

The prime minister said that the government was improving ease of doing business and facilitating business community in every possible manner.

To welcome ENI’s interest in expanding its business in Pakistan, the prime minister said there was a huge potential for exploration and production companies to take advantage of the growing energy needs of the economy. He said there were huge hydrocarbon reserves in the country, which were unexplored so far.

Earlier, Luca Vignati informed the prime minister about ENI’s activities in petroleum sector in the country.

He also informed the prime minister that ENI Pakistan had invested in a range of projects for development of local people, where it holds exploration and development. He said that ENI was mainly contributing to health, education, environment and socio-economic development.

He said that ENI was keen to expand its business, especially in LNG and offshore exploration and production, with latest technologies.

Separately, Prime Minister Imran Khan met CEO of Engro Foods Hein Schumacher, who called on him in the federal capital, to discuss the development of Pakistan’s dairy sector.

Engro Foods-Friesland Campina showed its keen interest to further expand its business with introduction of technology and best practices vis-à-vis nutrition and production techniques in Pakistan during the meeting with the premier.

The prime minister appreciated the interest of Engro Foods-Friesland Campina for expanding their business in the country.

“This would help farmers to increase their productivity and would facilitate the country capitalize its export potential in the sector,” the PM maintained.

He said that the government was cognizant of the need for putting in place a regulatory framework, which would not only help in regulating the informal sector but also towards ensuring quality of the food products.

Hein Schumacher underscored the need for a coherent regulatory framework, which would help in providing better, safer and affordable nutrition to consumers and dairy companies to grow their businesses in the country.

Separately, Prime Minister Imran Khan on Tuesday reiterated his government’s commitment to run the country on the basis of the fundamentals of the State of Madina.

“Students should get education about the life of world’s greatest leader and our Holy Prophet (Peace Be Upon Him) so as to take guidance from his Seerat-e-Tayyiaba,” he said while talking to students of Cadet College Mastung here at the PM Office.

The Prime Minister said that for research on the Seerat-e-Tayyiaba of Holy Prophet (PBUH), Seerat Chairs were being established in three major universities of the country.

Minister for Defence Production Zubaida Jalal was also present in the meeting during which the students interacted with the prime minister on various subjects. The prime minister said that since a person was known by his intentions and approach, the one who had big dreams and took big challenges became a great person.

“Every minor success prepares the man for big achievements. If a person continues to strive, he becomes a successful man. A person loses only after he accepts the failure. As good and bad times are part of life, a person gets lesson from bad times,” he observed.

Imran said a comprehensive planning was required to check the severe water issue in Balochistan, which had become worst due to growing population and the decreasing underground water level.

The prime minister said Balochistan had lagged behind as compared to other provinces due to various reasons and added the government would make every effort to provide development opportunities to the province, especially the provision of education opportunities to students through stipends so as to help them move forward.

He said as funds under the new local government system would be devolved to lower level.