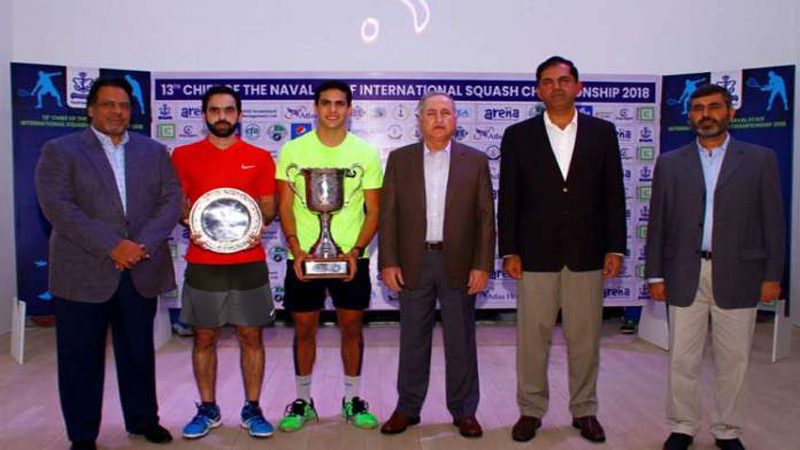 KARACHI: Unseeded Egyptian Youssef Ibrahim carved out a victory over third seed Farhan Mehboob of Pakistan in the final to win the CNS International Squash Championship here on Monday. Youthful Ibrahim overcame little resistance from his opponent to record a 11-7, 12-10, 11-8 victory in the 32-minute final of the $18,000 championship at the PN Roshan Khan-Jahangir Khan Squash Complex. “I am happy on my triumph and that too, in Pakistan which has produced numerous world class players including maestro Jahangir Khan,” Ibrahim told reporters after the final. An elated world No 71 Ibrahim said he had maintained consistent run on the PSA circuit and aiming to join the top players in the near future. “This is my sixth title of the year that will further improve my ranking,” he added. Commenting on the final the Egyptian said with the exception of second game he didn’t get much resistance and won according to plans. Praising hosting of the PSA circuit in Pakistan he said it was a good omen and hoped the efforts will unearth good players in the country.

“Though I couldn’t win yet I am pleased by making it to the final and improving world ranking,” two-time former CNS champion Farhan said. Recalling the country`s golden era of the game he said there was a time when Pakistan dominated the top 10 rankings in the world but now we hardly find them among the top 100. Asked about the final he said some umpiring decisions went against him.

Incidentally, the final coincided with the 55th birthday of the squash legend Jahangir Khan. The Egyptian received a purse of $3249 and winning trophy while the Pakistan fetched $2052 and runner-up trophy. Chief of the Naval Staf f (CNS) Admiral Zafar Mahmood Abbasi was the chief guest at the prize distribution ceremony.