India close in on victory after Australia wobble 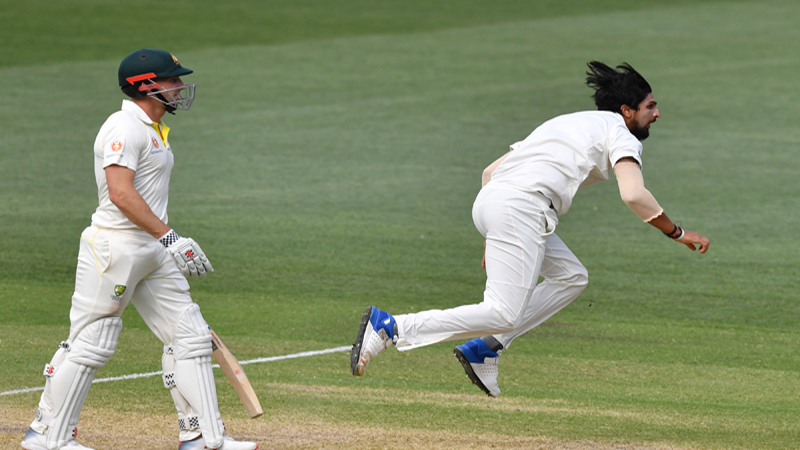 ADELAIDE: Spinner Ravichandran Ashwin and paceman Mohammed Shami combined to tear through Australia’s top order and bring India within six wickets of victory on day four of the series-opening Test on Sunday. Shaun Marsh (31 not out) and Travis Head (11 not out) were left clinging to their wickets after nudging Australia to 104 for four at stumps, after a nerve-jangling final hour at Adelaide Oval. Australia were 219 runs short of their victory target of 323 and will need to defy history to chase down the total. The highest successful run chase at Adelaide Oval was in 1902, when the hosts scored 315 for six to beat England.

“We still believe we can win this,” said Australia spinner Nathan Lyon who took 6-122 to help restrict India to 307 in their second innings. “We just need to go out there and enjoy ourselves and really compete hard and fight our backsides off.” Since the second World War, no team has bettered West Indies’ successful fourth innings chase of 239 for five, which defeated Australia by five wickets in 1982 at the venue. India have never won a series-opening test in Australia but Ashwin and Shami set up the platform to break new ground.

Ashwin broke the opening partnership of 28 by having Aaron Finch caught for 11. He later returned to take the prized wicket of Usman Khawaja for eight. Shami removed opener Marcus Harris for 26 and number five Peter Handscomb for 14. All of Australia’s batsmen were culpable in their dismissals. Harris, Khawaja and Handscomb all fell to loose shots, while Finch might have saved his wicket had he chosen to review the decision. Ashwin’s ball whistled past his glove on the way to a fielder in close but the technology showed no clear evidence to support Finch’s dismissal. India are in the box seat but also rued blowing a chance to bat Australia right out of the game due to a quick and shambolic collapse after lunch.

Having resumed on 260 for five in complete control, the tourists lost their last four wickets for four runs in a panicky bout of tail-end slogging. “We were expecting at least 25 runs from them (the tail) and that is an area where we are continuously looking to improve,” said India batting coach Sanjay Bangar. “We are just hoping the tail-enders, particularly 9-10-11, show a bit more application than they did today.” There was little to fault Cheteshwar Pujara, who added a 71 to his sparkling 123 which rescued India in the first innings. Ajinkya Rahane’s 70 also ensured Virat Kohli’s team had a decent total to defend. Tim Paine’s Australia will look to Dubai for inspiration, when they salvaged a draw from the first test against Pakistan in October after an epic stonewall. Much is riding on Marsh, the 35-year-old veteran under enormous pressure to keep his place after a run of failures with the bat. Australia will hope the number four can bring his Sheffield Shield form on day five. In the most recent Shield match at Adelaide Oval, he scored an unbeaten 163 as Western Australia chased down 313 in the fourth innings to beat South Australia.