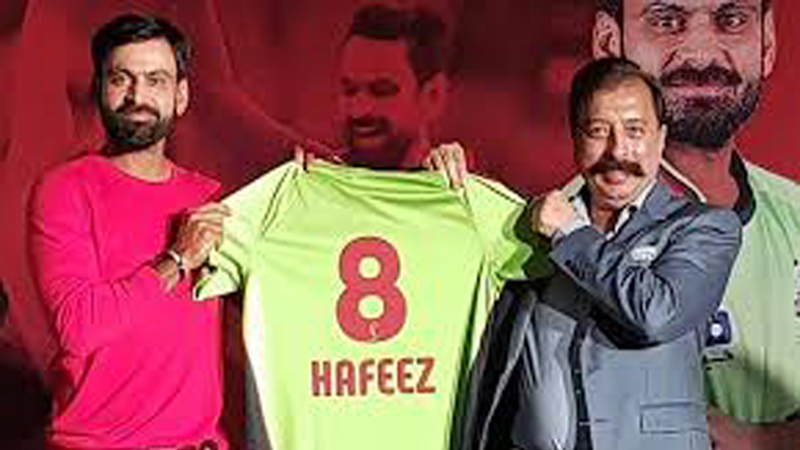 LAHORE: Veteran cricketer Mohammad Hafeez will be leading the Lahore Qalandars in the fourth edition of the Pakistan Super League nest year in UAE. An announcement in this regard was made via Twitter on Sunday. Hafeez thanked Qalandars owner Rana Fawad and the team’s management, adding that he is hopeful that together they will get the desired results this season. The fourth edition of PSL is expected to kick off in February 2019. After a dismal and miserable performance against the Kiwis in the recently concluded three match Test series in UAE which also prompted him to announce his long overdue retirement from Test cricket as well. Fakhar Zaman and Yasir Shah had also been considered, but Qalandars went with the more experienced captain.

In the last three seasons, Qalandars went with the Pakistan Test batsman Azhar Ali as captain, followed by Brendon McCullum for the following two seasons. Azhar, their first captain, was removed from the job and never played again even though he was initially retained for the 2017 season, before being released. Two seasons with McCullum as captain did not help improve their fate either, with the side finishing bottom every year since the PSL’s inception. Over the three seasons, they lost 18 out of 26 games.

Since the first season, other teams retaining their local captains had left the Qalandars short on options. But for the upcoming fourth season, they had a wider pool of Pakistan players to pick a captain from, with Misbah-ul-Haq, Hafeez and Shahid Afridi all in the draft. They went on to pick Hafeez as their platinum player last month, believing a local captain would bring better results.

Hafeez has played 248 T20 matches, scoring 5244 runs at a strike rate of 122.35. He captained Pakistan in T20Is between 2012 and 2014 before stepping down just days after the team’s exit from the group stage of the 2014 World T20 in Bangladesh. During his stint as T20I captain, he led Pakistan to the semi-finals of the 2012 World T20 in Sri Lanka. However, the team exited at the group stage of the 2014 edition, after losing to West Indies by 84 runs. It was the first time Pakistan had failed to progress to the semi-finals in five editions of the tournament. Hafeez’s overall T20I record stands at 18 wins (one via a one-over eliminator) and 11 losses from 29 matches.