HBL down SNGPL in final to lift Quaid Trophy 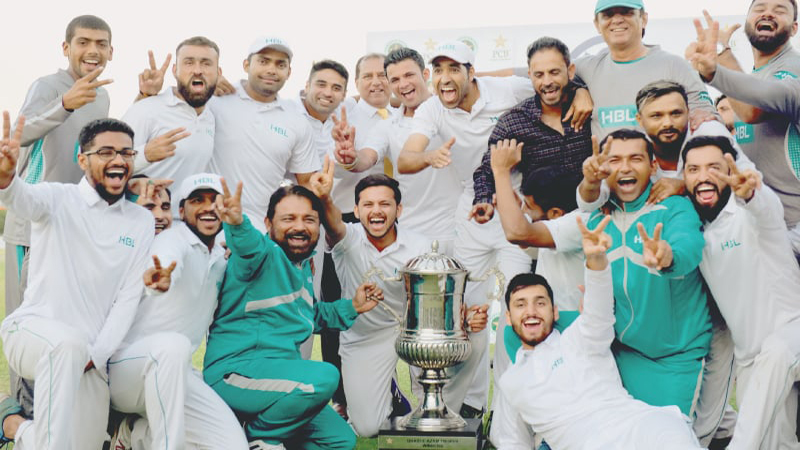 KARACHI: Habib Bank Limited (HBL) realised their dream of a rare grand slam this season on Saturday after holding off Sui Northern Gas Pipelines Limited (SNGPL)`s desperate bid of retaining the Quaid-e-Azam Trophy National Cricket Championship here at the UBL Sports Complex. A sporting declaration by Misbah-ul-Haq left HBL the option of either going for the 263-run target or surviving 79 overs. The bankers opted for the latter as they hung on grimly to thwart SNGPL lifting the trophy. They eventually ended up totaling 183-6. Appropriately enough, Imran Farhat (22 off 92 balls) )was there to shepherd his side to safety in a frenetic last session during Misbah`s charges not only crowded the batsmen but kept umpires on their toes with their constant appealing in order to grab the remaining wickets. The situation almost got out of control as Misbah was spoken to by the umpires on several occasions to keep calm. The desperation from the fielding team was understandable because they had nothing to lose even of HBL had won the five-day fixture outright. After wiping off the first innings deficit of 168 on Friday’s penultimate day, SNGPL needed quick runs and by stumps on day four they were in front by 168 on a pitch which played true on the last two days. Misbah, who is not known for being a proactive leader during his illustrious career, wanted to take the gamble by throwing the bait to the opponents, who only needed to bat out the remainder of the day to celebrate winning a second trophy. Upfront SNGPL threw their bats at everything in a tactic that saw a remarkable 94 runs coming off mere 8.4 overs in a matter of just 43 minutes. Imran Khalid, who resumed at 41, thrashed his way to 48-ball 73 that included four sixes and three fours.

Misbah, with whom Imran added 81, extended his Friday score of 14 to 44 in definitely his final first-class appearance while Bilawal Bhatti hoisted three sixes in an 11-ball 30 when the innings was closed at 430-7. HBL batted through 16 overs to go into lunch at 48-1 with firstinnings centurion Abid Ali falling lbw to former Pakistan international Asad Ali for eight. Umar Akmal, who was later adjudicated the man-of-the-final for contributing 113 and 52, was undone by paceman Bilawal after outscoring Agha Salman (24 off 91 balls) in the partnership of 72 after HBL had slumped to 72-3.

HBL who won the Quaid-e-Azam One-day Cup after sealing a 29-run victory against Water and Power Development Authority (WAPDA) in the final at the Gaddafi Stadium in Lahore had every reason to celebrate lifting the coveted first-class crown along with a handsome purse of Rs3 million. SNGPL had to settle for the runners-up trophy and cash prize of Rs2 million, while the remaining individual awards if Rs100,000 each went to Karachi Whites’ Khurram Manzoor (best batsman, 886 runs in the championship), Lahore Blues` Aizaz Cheema (best bowler, 59 wickets) and Peshawar’s Gohar Ali (best wicket-keeper).