‘Pakistan will starve if mountains are not protected from over exploitation’ 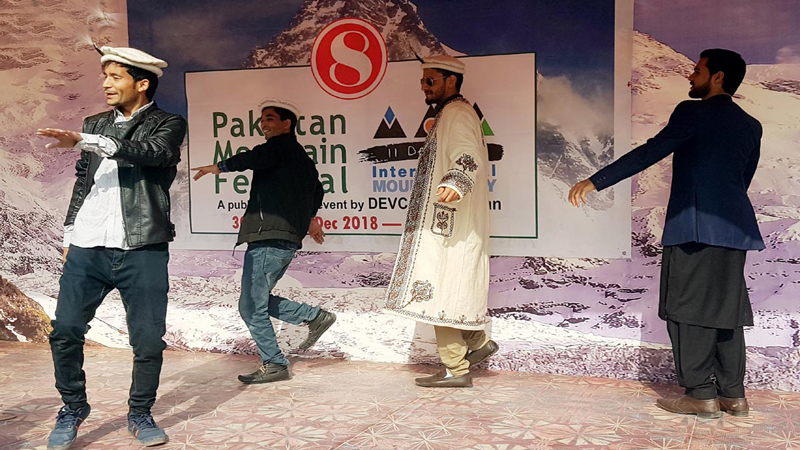 ISLAMABAD: The two-week-long 8th Pakistan Mountain Festival concluded with screening of international mountain films and cultural and music performances at the Lok Virsa on Sunday.

Services of supporting organizations and individuals were recognized in the brief concluding ceremony.

The festival was a flagship annual event of the Development Communications Network (Devcom-Pakistan) to commemorate the importance of mountains. This year the festival was supported by the National Bank of Pakistan (NBP), Pakistan Poverty Alleviation Fund (PPAF), Centre for Culture Development, Gilgit-Baltistan Youth Council and Islamabad Devcom Centennial Leo Club (IDCLC).

The Mountain Cultural Showcase was the last event comprising an exhibition of paintings by 20 art teachers and display of handicrafts and horticultural products and cultural performances from different regions.

Films screened at the Pakistan Mountain Festival were some of the best selected from the Inkafest International Mountain Film Festival, which takes place in Peru.

The films screened included El Mostro De Los Andes, produced by Juan Andrés Coriat in 2017. The film is about Victor Rimac, 31, has dedicated his life to the mountain and his specialty is the Solo Climbing. After achieving the North Summit of Huandoy (Huaraz) alone and in less than 24 hours, his friends began calling him “El Mostro Andino”. It is wonderful Peruvian short film of one’s efforts and consistent struggle to achieve the goal.

M.S.N.M, produced in 2017 by another Peruvian producer Mauricio Quintanilla Rodríguez, narrates the story of the journey high above the Peruvian Andes through the dramatic clouds and peaks. Paired with an original score, M.S.N.M. is a simple yet enchanting glimpse at a magical land.

La Vuelta Al Huascarán is the best short film of the Inkafest 2018, produced in 2017 Víctor Jesús – another experienced and skilful producer from Peru. It is about the legendary ‘Return to Huascaran’ to explore the Cordillera Blanca that is at the foot of the highest mountains in Peru. The film discovers the Andean villages, rich in stories you cannot find written in a book. The race route passes through the highest and most impressive mountains of our beloved Cordillera Blanca.

For the film, the producer toured sacred sites, artisan villages, diverse ecosystems of Huascarán National Park and quickly understood because the place has so many myths and legends, being a small mortal at the foot of the giant snow-capped and exposed to the tremendous power of nature. It is said that, in ancient times, Huascarán, the highest mountain in the country, was a young mortal who fell in love with the daughter of the god Inti named Huandoy.

Daulaghiri, a film by the Argentinian producer Guillermo Glass, Cristián Harbaruk, has received Ascenso A La Montaña Blanca, the grand prize of Inkafest 2017. This 72-minute long film describes the adventure of four Argentinean friends, Guillermo, Christian, Sebastián and Darío, decide to make a documentary recounting their long ascent of the Dhaulagiri. However Darío dies during a solo attempt to reach the summit. After their return, Guillermo will begin to film a second journey on the trail of his expedition companions, in an attempt to work through the questions that have continued to torment him since the day of the accident, and in particular the choices that took them too close to the extreme limit.

Reynaldo – the rainforest hero was produced in 2013 by Crees Foundation. It narrates the story of Reynaldo Ochoa who is an inspiration to the people of Manu in the Peruvian Amazon rainforest. For the past 20 years he has dedicated his life to finding new ways of living in balance with his environment. By encouraging farmers to plant trees with their crops and enabling families to grow fresh organic produce he is helping to forge a sustainable future for the region, both protecting the environment and allowing local people to flourish.

Speaking on the concluding ceremony, the Devcom-Pakistan Director and founder of the Pakistan Mountain Festival thanked the organizations for their support to the festival. He said from the next year more valuable attraction would be added to the festival that would enhance the scope and mandate of the festival.