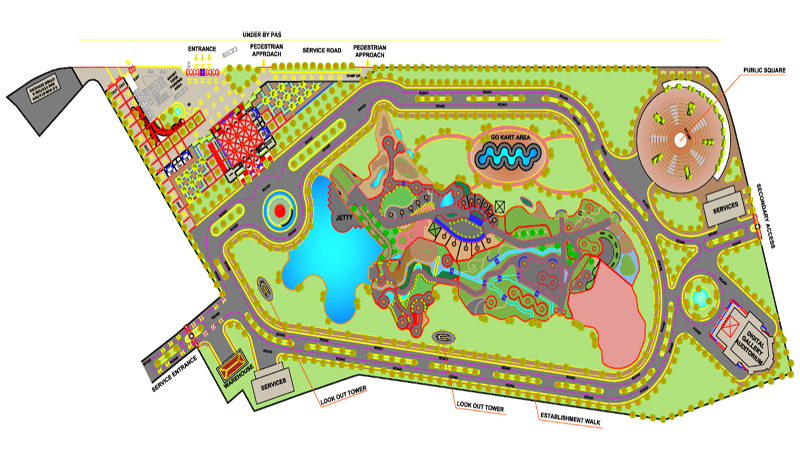 KARACHI: Quaid-e-Azam Mazar Management Board (QMMB) has put forward a plan for establishment of ‘New Pakistan Park’ and a museum on 43 acres of land adjacent to Jinnah’s mausoleum, according to officials of Management Board.

According to officials, 28.11 acres of southern land had been set aside for Pakistan Park while a botanical garden would be set up over 11.35 acres of eastern land. They said that land on southern side had been earmarked for the establishment of Pakistan Museum.

The plan to establish a park had been formulated by Irfan Siddiqui, then advisor to former prime minister Nawaz Sharif. Reportedly, the plan was proposed after undertaking an extensive study of sites at Miniaturk (Istanbul, Turkey), Mini Europe (Brussels, Belgium), Window of World (Shenzhen, China) and Maduro dam (The Hague, Netherlands).

The QMMB officials said that a consultant company-Atif Nazeer Associates had already been handed over the plan for feasibility report, cost of the project and all allied matters including visiting sites for initiating the landmark project. The officials added that the federal minister for National History had already held discussions with alteration of the plan with QMMB officials and had asked them to submit their plan to his Ministry which would then forward it for the final approval of Central Development Working Party in Islamabad.

Highlighting salient features of the plan, QMMB officials informed that replicas and miniature models of 42 national importance sites of Pakistan situated in Sindh, Balochistan, Punjab, Khyber Pakhtunkhwa (KP), Azad Kashmir valley, Naran and Kaghan valleys, Swat, Gilgit Baltistan and sites of Northern areas would be installed in the New Pakistan Park. They said that these replicas and models would b displayed on a physical map of the country. They further said that miniature of historic sites and buildings in Sindh to be built on the map included Tharpakar, Sukkur Barrage, Raniakot Fort, Moen-Jo-Daro, Makli graveyard, Shah Jahan Masjid Thatta, KPT Building, Mohatta Palace, Flag House Staff Mansion and Wazir Mansion in Karachi and Clock Tower in Jacobabad.

The officials said that a fish aquarium would also be built on both sides of the Park and an underground subway would connect all facilities to theMazar. In addition, dams, bridges, water works and barrages would also be highlighted at Park. Natural features, vegetation features, hard and soft landscape, national animal enclosures, historical roads, parks and sites of Karachi, Sialkot and other cities including landmark construction and sign of China Pakistan Economic Corridor would also be highlighted at the park through models and replicas.

Political activities and bringing out rallies would be prohibited within one kilometer in areas’ radius after completion of Park project, informed the officials.