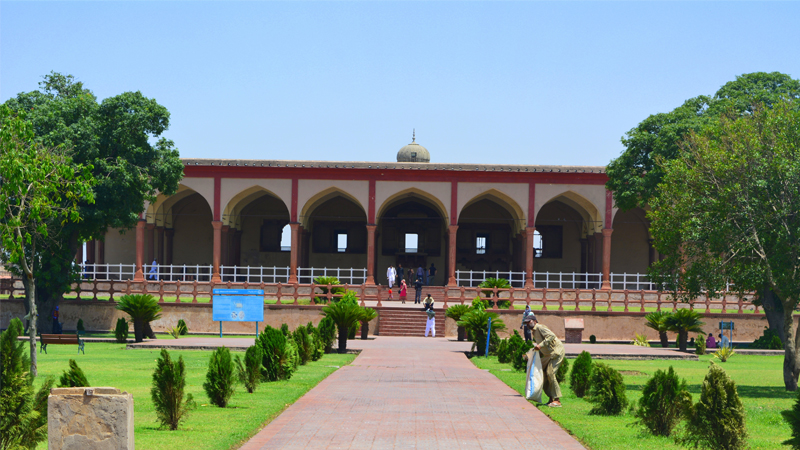 Let me take you to the most famous place inside Lahore Fort along with the unheard stories of its survival and transformation over the years. This place is known as Deewan -e- Aam which is always thronged by tourists and is the most attractive and prominent feature of the grand fort.

There are tales and unheard voices of past inside its bricks, pillars, passages and the balconies and its structure makes the centre of the north periphery of the fort’s huge garden and thus becomes the focus of all activities and the first place that tourists visit.

This house of forty pillars is a unique feature of the fort and was the place where the king held public hearings. The unique feature of Deewan -e- Aam is the marble’ jharoka’ or the throne gallery projecting from its rear wall and there the emperor would sit with his royal protocol to hear the problems and grievances of the public as well as state matters. The structure is built on a raised platform bordered by a stone railing and measures around 187 feet by 60 feet and rises to a height of 34 feet with pillars inside the entire hall. It is a double storey structure and on the second floor you can see beautiful cusped marble arches and from there you can also get a mesmerising view of the Jahangir’s Quadrangle.  This place was the Daulat Khana Khaas but now it is temporarily closed for the public as it is being restored.

Deewan-e-Aam was constructed in front of the Jharoka of Daulat Khana-e-Khas, built by the Mughal emperor Akbar and the intricate marble work in the state balcony, located a few feet above the ground level is said to be the earliest structure existing at the Lahore Fort. 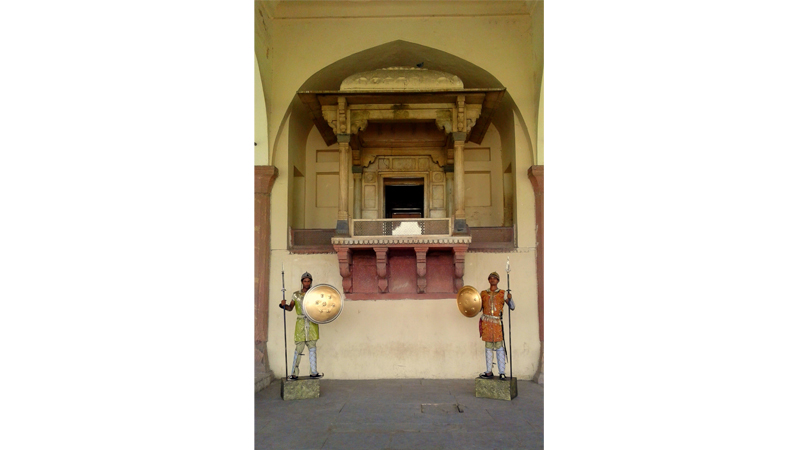 Deewan-e-Aam and its gardens were the stage on which the pomp and stateliness of the Mughal Empire was exhibited. During the Mughals the passages in this area were decorated with costly shawls and carpets and the garden was set up with silver pavilions for the princes and costly tents for the nobles, lined with velvet, damask and taffetas. What a mesmerising feeling one gets when visualising this scene. It is said that during the reigns of Mughal emperors Akbar and Jahangir, the Deewan-e-Aam consisted of a triple canopy of velvet to provide protection from the sun while the floor was covered with rich carpets.

When Shah Jahan took over the throne among his first orders was the instruction to replace the velvet canopy by a wooden hall. Its construction was completed in three years under the supervision of Asif Khan who was the brother of Noor Jahan, the empress and wife of Shah Jahan’s father, Jahangir.  Soon a costly ‘Chihil Satun,’ meaning 40 pillar hall was ordered both in Agra and Lahore by Shah Jahan and thus this place became to be known as the hall of forty pillars. The one built in Agra Fort still survives but the Deewan –e- Aam of Lahore Fort went through a lot of modifications during the Sikh and British rules. 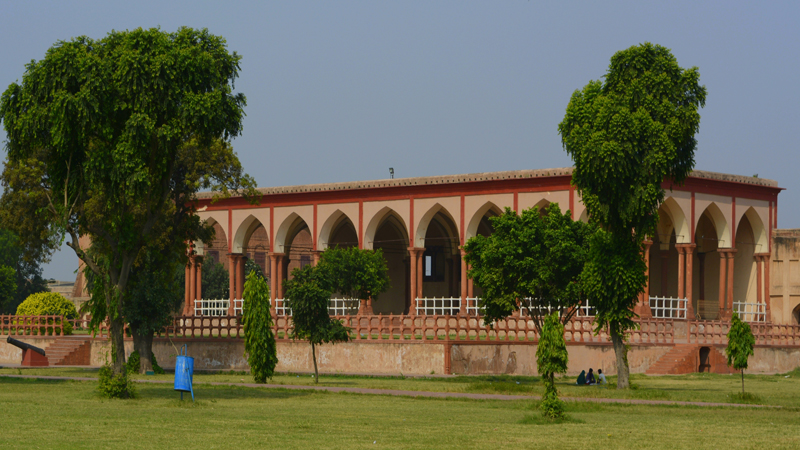 However, inside Deewan-e-Aam there is still a small portion of the original Mughal floor which is the brick flooring of old Lakhauri brick. If by chance you have a tourist guide with you while visiting the fort you can ask him to show you this patch. It is distinguishable from the remaining floor.  The original red stone poly-faceted column shafts and the multi foil arched bases that had supported the original roof have been re-used in the hypostyle and thus the ceiling rests on many columns, and this is a unique feature of the structure. The structure of this building although simple, reflects the majesty and pomp of the old times.

While standing in this dignified and huge building you will see similarity in the Akbari architecture which is clearly reflected in the Jahangir’s Quadrangle.  The relatively simple faceted concave capitals that you see here were transformed into elaborate stalactite capitals beautifully decorated with inlay work when Shah Jahan’s Shah Burj was built. 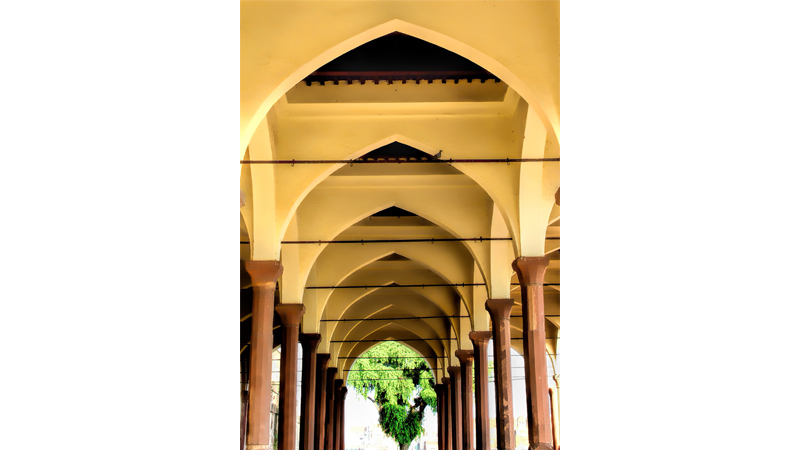 Now let us come to the changes made in Deewan –e- Aam during the subsequent rulers that took over the fort after the decline of the Mughals. History records that the building of Deewan-e-Aam collapsed when Maharaja Sher Singh, son of Maharaja Ranjeet Singh, bombarded Lahore Fort by light guns while fighting against Rani Chand Kaur the widow of Kharak Singh who was the elder son of Maharaja Ranjeet Singh. The entire structure was ruined and knocked down.

Then came the British rule and surely the fort was the hot seat for them too. It is said that the British rebuilt Deewan –e- Aam in 1849 and placed their barracks in the huge gardens in front of the structure and other parts of the fort. British created a lot of soldier barracks inside the fort and that was the time when several structures inside the fort were changed into soldiers and army residents and offices and Royal Kitchen was on top of the list. 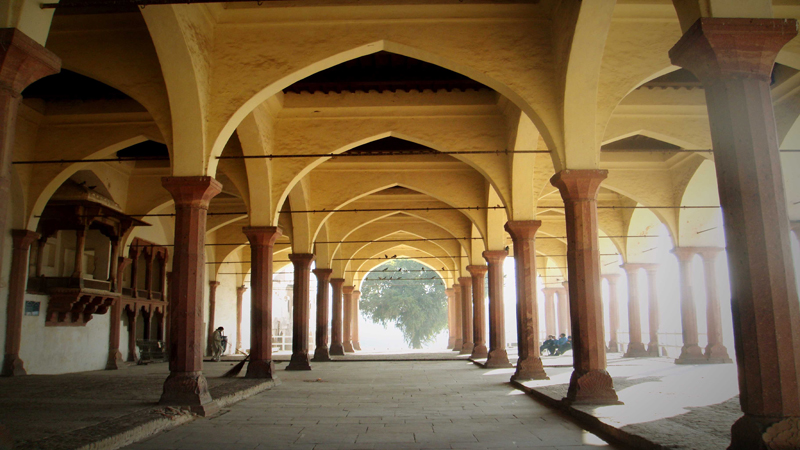 Diwan-e-Aam was used as a hospital after adding a long verandah to its façade on the south and the curtain hooks on the walls and pillars which were put there by the British can still be seen.

Deewan-e- Aam over the passage of time became dilapidated and derelict and the ceilings also started cracking and the structure weakened as whole. A few months ago the Walled City of Lahore Authority restored the hall and strengthened the structure by filling up the cracks as well.

Now if you visit this place you will also see the Mughal era costumed guards standing under the state balcony. New signboards and info graphs have also been placed in order for the tourists to know the history of the grand structure.