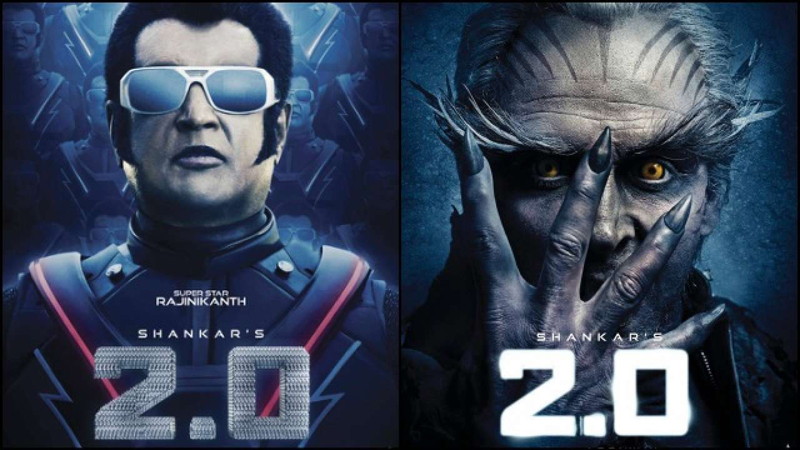 Finally, the most awaited movie of the year ‘2.0’ is out in the cinemas and while the film did not meet all our expectations it did provide a cinematic experience not to be missed for its sheer audacity and scale. Director S. Shankar takes you on a roller coaster ride of 2 hours and 30 minutes with some jaw dropping visual effects (VFX) sequences. The movie had been in production for the last three years. Due to its complex VFX which took longer than expected, its release was rescheduled twice.

Characters: The megastar Rajinikanth never fails to create an impact. He performed a double role of Dr Vaseegaran and Chitti the robot and was the highlight of the film. The 67 years old superstar puts up a fantastic show, proving himself one again. On the other hand, Bollywood star Akshay Kumar plays the antagonist named Dr Richard. Akshay plays his character with dignity and proves his worth as one of the best in the business. Other actors like Amy Jackson and Adil Hussain give adequate if not mind-blowing performances.

‘2.0’ looks world-class and provides great spectacle, but the plot of the movie leaves a lot to be desired. Rajinikanth and Akshay Kumar’s star power and charisma are the saving grace for this ambitious attempt by director Shankar

Plot and VFX: The weakest area in the script was the plot of the film. The first half of the film is boring and confusing. Things start to unfold in the second half. Moreover, the screen presence of Akshay is also very limited. He only appears in the later part of the movie. The film includes some unnecessary double meaning jokes and some bad comic timing. At times, the film is so out of logic that you will be sure it’s a Bollywood film. But then comes the good part –the VFX. The slick visual presentation makes up for what the story lacks. The producers have invested the maximum amount of money in the VFX budget of the movie, and it is clearly reflected on the big screen. This movie will be a path breaker for a new age cinema in Bollywood.

Box office: The movie is made with a grand budget of Indian Rs 650 crores and the opening of the movie was not as good as expected. On the opening day, the movie was able to gather a total of Rs 20.25 cr in the Hindi version which is below bar because the number of screens exceeded to over 4000. However’ its earnings are expected to grow in the coming days. The producers and the distributers are highly depending on the star power of Rajinikanth and Akshay Kumar and the VFX to draw in audiences,

Verdict: 2.0 is a visual effects spectacle but the larger message is confused and the screenplay too slow for an action flick. I will go with 3 star rating out of 5 for this film.