‘Party politics not the only route to express progressive ideas’

Speakers discuss the long overdue revival of the Left 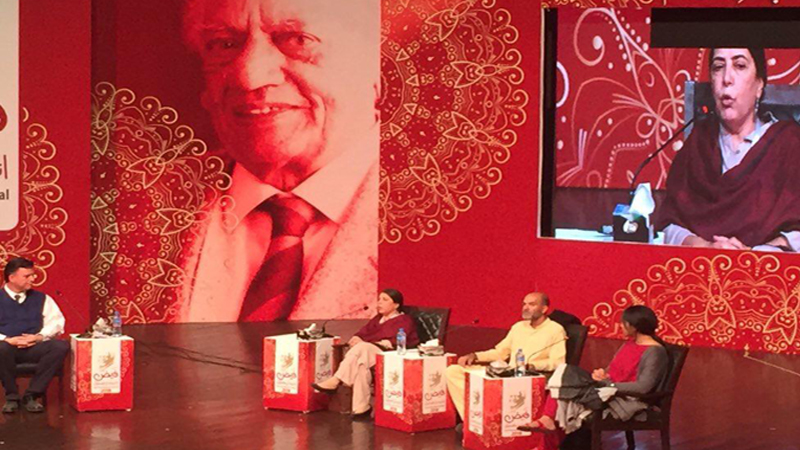 a session titled “Is alternative possible?” was held at Faiz International Festival on Saturday to discuss the future of Left-wing politics in Pakistan. Panelists stressed on the need for unity among progressive quarters in order to challenge the status quo. Leftist politician and columnist Aasim Sajjad Akhtar said alternative systems, whether good or bad, have always been in place across the world. Even in a society like ours, he said, a counter force continued to make its presence felt in the social arena until about 30 years ago. However, he added that populism reigns supreme in Pakistan now. “We are going through a phase of populism and manifestos of mainstream political parties are more or less similar,” he said, adding that whichever of the mainstream parties comes to power, not much will change because their policy frameworks are the same.

Explaining how the current dynamics are different from those in earlier times, he said societal divide was extensively discussed in the mainstream 30 years ago, but the same is not a part of mainstream political discussions anymore. “There was a time when progressive and nationalist parties were eyeing power and had transformative plans for the prosperity of the country, but that is no longer the case because such voices have been pushed to the wall.”

Aasim lamented that we as a nation deal in ’empty signifiers’ such as democracy and human rights. He says we think of TV anchors as intellectuals and an authority on politics, and do not think rationally.

Further, Aasim said that the Leftists ought to engage with people who want transformation. We need to learn from past but it is also time to move forward because political dynamics are changing, he said.

Aisha Ahmad, a member of the Lahore-based rights movement Haqooq-e-Khalq, was of the opinion that party politics is not the only route to express progressive ideas. Sharing details about the HKM’s activities, she said the movement was formed around elections time in May, and added that instead of contesting elections, the activists associated with the movement thought of engaging in other kinds of grass-root activism to help empower the working class. “In Pakistan, the culture of pre-election debates among candidates is non-existent. There is no way a common man can ask its potential representative as to what strategy they will adopt to overcome the prevailing crises,” she said.

Aisha said the Haqooq-e-Khalq movement aims to become a bridge between working class citizens and their elected representatives. “We have been going to various working class neighborhoods in Lahore to help establish a relationship between constituents and the local politicians so they know that there are voices that will hold them responsible.

Aisha Ahmad, a member of Lahore-based rights movement Haqooq-e-Khalq said the movement aims to become a bridge between working class citizens and their elected representatives. “We have been going to various working class neighborhoods in Lahore to help establish a relationship between constituents and the local politicians”

Awami Workers Party (AWP) leader Ismat Shahjahan says how the Left popularises its politics is a problem world over. “In many countries, Leftists were able to form government, but it could not happen in Pakistan because Left was disengaged from parliamentary politics for a long time. “Despite that, we continue to make our presence felt in the political arena. The AWP fielded 22 candidates in the last general elections, but when establishment decides which party will form government, there is only so much the Leftists can do to stay politically active,” she said.

Ismat said an alternative in politics is possible but only Leftists can make it happen, adding that if all secular, feminist and nationalists groups enter into an alliance, only then can we see a revival of the Left.

In response to a question about reaching out to the public to promote the Leftist agenda, Aasim Sajjad said it’s not sufficient to preach to the converted. He further said that those who are hostile towards the Left are in great numbers, and the Leftists need to find a way to engage with them. “Finding out ways to reach out to the segment which has been dismissing us should be a collective task,” he said, adding that identifying the issues is not enough, Leftists should also quantify as to what they have to offer in terms of solutions.

Further, Aasim said even progressives sometimes don’t agree withe one another, which is often a problem.

About the women question, Aisha Ahmad said the working class women HKM engages with have gender-related issues, but a whole lot of other issues also affect women. Ismat was of the opinion that the women question is linked to the national question. “Defying patriarchy has become a bigger crime than blasphemy today,” she said, adding that patriarchy continues to claim lives of women.

Ismat added that only Left discusses gender equality and justice in true sense of the word.