Karachi conference kick-starts with a discussion on Lasbela’s geography 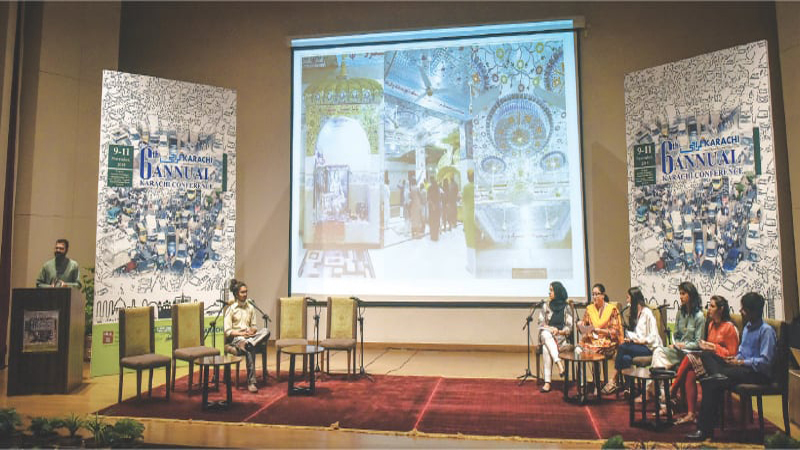 The conference started with a session discussing the sacred geography of Lasbela through eyes of students who had visited the Bela region and conducted their research on the myth and reality of these sacred sites. Dr. Kaleemullah Lashari later summed up in his presiding speech, “folklore is an oversimplification of history.” He also praised the students’ efforts of understanding this relationship between folklore and history. He also pointed out that the Bela region, like the regions of Dadu and Thatta, had ensured that Karachi remained safe from the powerful kingdoms surrounding it.

The students, Novaira Khan, Amal Hashim, Mowwiz Shaheen, Fatima Siraaj, Safina Shilwani, Ali Arshad and Anam Imran, in their presentations covered various aspects of the sacred sites in the Bela region. Khan’s presentation focused on the Nanakpanthi community of the area. This community was first called by the name in the 17th century by Shaikh MohsinFani, a Persian writer, because of their faith in Guru Nanak, the 13thcentury founder of Sikhism. Khan also pointed out that today, the two communities lived in peace and harmony and respected each other’s beliefs. Hashim explored the myth of the seven sisters and compared this folklore with the similar myths

that existed in Rohri in northern Sindh. She pointed out that the tombs of these “sisters” were quite close to the site of another temple, Hanglaj Mata, an important Shakti site.

Shaheen made a comparison between the tombs of Muhammad Ibna Haroon and Colonel Robert Groves Sandeman. While Ibne Haroon was a contemporary of Muhammad Bin Qasim who was believed to have been sent to the Mekran before the Bin Qasim’s Sindh campaign, Col Sandeman was a British officer from the 19th century. Shaheen pointed out that some people believed that both these people were sacred and revered them just the same.

Siraj’s presentation focused on the shrines of love legends such as Shireen and Farhad and Sassi and Punhu, as well as graves that were believed to belong to people who were with prophet

Noah. “Folklore and history make a pair,” Siraaj said. Shilwani spoke on the architecture of these sacred sites and pointed out that the designs and the colors of these buildings were very much related to the belief systems of the people of those times.