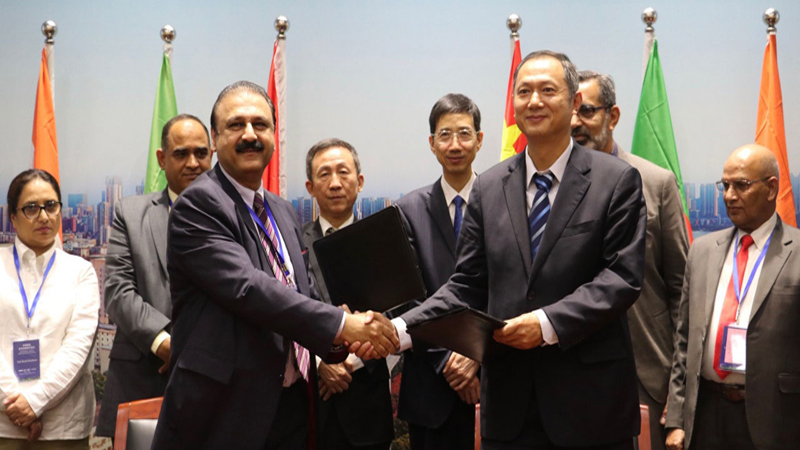 The Government College University (GCU) has signed two agreements and a memorandum of understanding with the China Three Gorges University (CTGU), Yichang.

The significance of the MoU is to set up a special winter school for Chinese students every year in Lahore.

Briefing the media about the agreements at the university’s Syndicate Committee Room on Sunday, Prof Khalid Butt said that each year for the next five years, around twenty Chinese students would attend the winter school at GCU Lahore for three weeks to study subjects like Pakistan Studies, Pak-China relations and English.

As per the MoU, each Chinese student would pay $180 to GCU for attending the school. Both the universities also agreed to exchange six students and one teacher every year for a period of five months, besides holding joint conferences, training workshops and seminars.

Prof Butt said that CTGU, a reputed public sector university, had also signed two important agreements with GCU for promotion of Pakistan Studies in China and China Studies in Pakistan to bridge the cultural and language barriers between the two friendly nations.

He said that GCU would facilitate CTGU in establishing and strengthening the Pakistan Studies Centre in Hubei, China, while CTGU would support the activities of the GCU Center of Excellence, China Studies.

For the purpose, Prof Butt added, both the universities had agreed to jointly hold regular academic interactions, initiate research projects and organize training workshops for high-level talent in both countries.

Prof Butt further said that CTGU had also agreed to provide an instructor to GCU for teaching Chinese language.

GCU Vice Chancellor Prof Dr Hassan Amir Shah said social and cultural integration of two friendly nations was highly crucial for the success of China-Pakistan Economic Corridor. He stressed the need for more strong academic and research collaboration between the universities of China and Pakistan. He requested the governments of both countries to fund these universities’ collaborations.

Prof Shah said that the GCU was the first public sector University of Pakistan who had joined the South-Asian-Hubei Universities Alliance aimed at strengthening cultural exchanges among the regional countries and promoting education and scientific researches.

“Around 27 top South Asian Universities have become member of the prestigious alliance,” he said.

The vice chancellor congratulated Prof Butt for successfully representing GCU at the President’s Forum and fetching agreements with the CTGU.