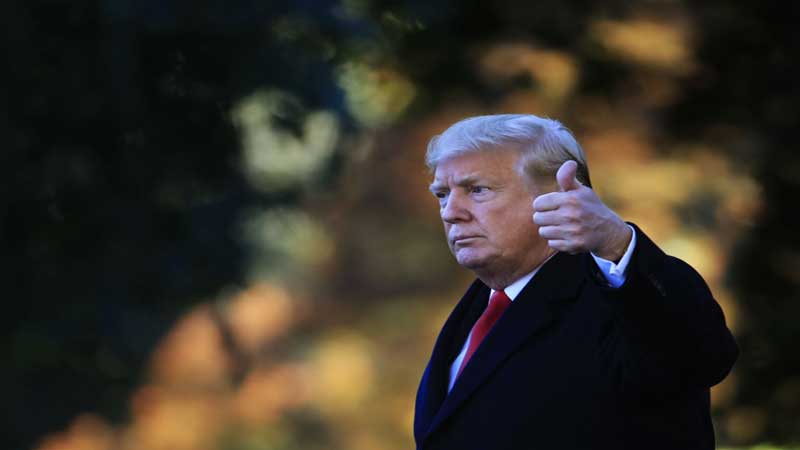 The discovery of pipe bombs targeting prominent Democratic politicians and CNN is raising the threat of election-season violence largely unknown in the U.S. — and prompting uncomfortable questions about the consequences of leaders’ increasingly vitriolic rhetoric.

Coming two weeks before midterm elections, the thwarted attacks Wednesday caused renewed soul-searching — and finger pointing — about whether President Donald Trump has fanned passions to dangerous levels. Democrats swiftly pointed to his remarks seeming to condone violence against reporters and belittling political opponents, including some apparently targeted by the devices. Trump decried all political violence and issued a broad call for unity.

Some voters expressed concern the country was spiraling into new territory.

“It almost seems like we’re in the middle of a civil war without the shots being fired,” said Bobby Dietzel, a 45-year-old information technology worker from Kansas City who is registered with neither party. From a Denver coffee shop, he said he watched the political conflict with alarm. “It’s almost scary to talk politics with people.”

Law enforcement officials did not comment on the possible motives behind the crimes or whether political ideology may have played a role. Those involved have all been targeted by Trump and the right.

The thwarted attacks — revealed in rapid succession Wednesday — added volatility to midterm elections poised to be a referendum on Trump’s tumultuous two years in office.

Long before the explosives were discovered, violent rhetoric had emerged as a central theme in the closing days of the midterm elections, particularly for the GOP. Republicans derided protesters for disrupting GOP lawmakers or Trump officials at restaurants or other public places. While campaigning, Trump and leading Republican candidates have increasingly warned of a rising Democratic “mob” prepared to inflict physical harm upon its adversaries.

But even some Trump allies saw the events of Wednesday as a moment for reflection and urged Trump to tone it down.

“You gotta calm it down,” said Anthony Scaramucci, a prominent Trump supporter who briefly worked in his administration. “The president has grown in the job. He now has to take another transcendental step and realize that he’s got to dial down the rhetoric.”

On the other end of the political spectrum, New York Mayor Bill de Blasio, a Democrat, offered a message to “all public officials of all partisan affiliations.” ”Don’t encourage violence,” he said. “Don’t encourage hatred. Don’t encourage attacks on media.”

De Blasio added: “That has to start at the top.”

Waters in June called on supporters to harass Trump’s cabinet members in public, while Clinton this month said: “You cannot be civil with a political party that wants to destroy what you stand for, what you care about.”

Clinton is among a handful of top Democrats, including former President Barack Obama and his Attorney General Eric Holder, who were targeted with explosive devices, authorities said Wednesday. The New York offices of CNN, the cable network frequently attacked by Trump and his supporters, was evacuated after receiving an explosive device and an envelope containing white powder. Billionaire Democrat George Soros, a regular focus of conservative conspiracy theories, was targeted on Monday.

In a written statement, CNN President Jeff Zucker decried what he called “a total and complete lack of understanding at the White House about the seriousness of their continued attacks on the media.”

For a moment, at least, Trump offered a somewhat conciliatory message during a Wednesday evening political appearance in Wisconsin.

“There is one way to settle our agreements. It’s called peacefully at the ballot box,” Trump said while reading from the teleprompter. He later described Wisconsin’s Democratic Sen. Tammy Baldwin as a “radical far-left” socialist and said “our country is assaulted” by a caravan of thousands of Latin American immigrants, still about 1,000 miles away.

The president is expected to continue an aggressive campaign schedule in the midterm season’s final days.

For virtually his entire political career, Trump has embraced inflammatory and often deeply personal attacks against his opponents. He repeatedly encouraged supporters to physically attack liberal protesters during the campaign, offering to pay for their legal bills. He regularly calls media outlets such as CNN “the enemy of the people.”

Yet the rhetoric has sometimes turned darker in recent weeks.

He warned this week, without proof, that terrorists had infiltrated a caravan of Central American immigrants headed toward the U.S. border. He also praised a Republican congressman from Montana for body slamming a reporter.

The Southern Poverty Law Center, which tracks hate crimes, believes there is no “moral equivalence” between the violent rhetoric of the two parties, according to Heidi Beirich, the head of the organization’s Intelligence Project.

“The fact of the matter is that the people who have received these bombs — the Clintons, Obama and George Soros — have been horrifically demonized by the right. Not just in terms of neo-Nazis, but also from people like Donald Trump,” Beirich said. “There tends to be a relationship between demonizing rhetoric and violence.”

Yet Republican voters across the country are equally convinced that Democrats pose the real threat. And Republican candidates are going out of their way to reinforce that message.

At a weekend campaign appearance at a Florida retirement community, GOP gubernatorial candidate Ron DeSantis attacked Waters and Holder by name for calling on Democrats to harass Republicans. He also recalled the 2017 Capitol Hill shooting that left several wounded, including Republican Rep. Steve Scalise of Louisiana.

“We don’t want the state of Florida to be the petri dish of George Soros and the radical left,” DeSantis charged. “You look at the stuff that’s going on with these mobs and the violence that they’re doing.”

Clinton, speaking at a Florida fundraiser for congressional candidate Donna Shalala, thanked the U.S. Secret Service for intercepting the package before it reached her suburban New York City home. But she called it a “troubling time” and a “time of deep divisions, and we have to do everything we can to bring our country together.”

Voters in key midterm battlegrounds are fed up and frightened.

Ariana Hendricks, a 40-year-old massage therapist in Denver, said violence in politics has always been something people thought about.

But because of Trump, she said, “now they think it’s OK.”