Taliban kill election candidate, kidnap another as Afghanistan goes to polls on 20th 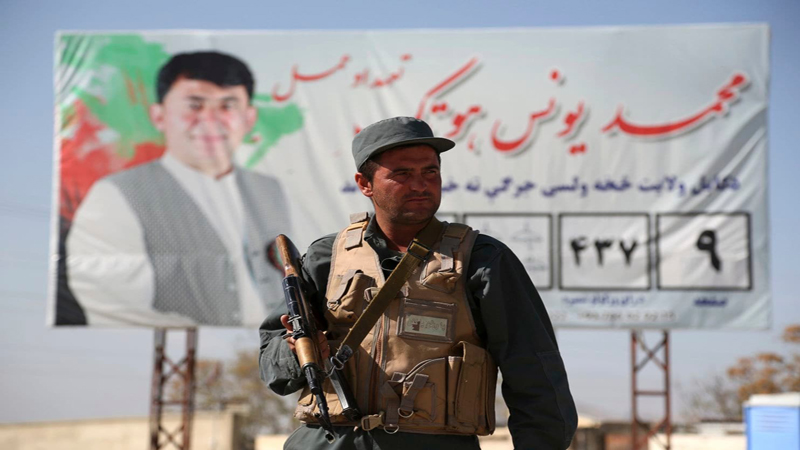 ISLAMABAD: Taliban on Wednesday killed an influential candidate and kidnapped another, raising concerns about the security situation just two days before the elections in the war-shattered country.

Afghanistan is slated to hold parliamentary elections on October 20.

In Kabul, Interior Ministry spokesman Nusrat Rahimi said three supporters of Qaharman were also killed, while seven others injured in the attack. Qaharman was a former lawmaker and retired general and had served as President Ashraf Ghani’s special representative for the security in Helmand. He had also served on different military positions during the Communist regime.

President Ashraf Ghani’s office condemned the attack and ordered an investigation into the incident.

It was the second attack on election candidates in Helmand this month. National Assembly candidate Saleh Muhammad Achakzai and his eight supporters were killed in a bomb attack. No group had claimed responsibility.

At least 16 people were killed in a suicide attack on a gathering in Kama district of eastern Nangarhar province on October 2. Daesh, which is active in parts of Nangarhar, had claimed the responsibility for the attack.

Taliban on Wednesday urged teachers and directors of universities, madrassas, schools and education institutions to boycott and neutralize this process “launched by the invaders.”

“The election process has no Islamic or Afghan essence. It is a foreign plot to prolong occupation, mask military invasion and deceive the common mindset, which is both funded and its final results will be dictated by infidel invaders,” the Taliban said in a statement. The statement came a day after Afghanistan Independent Election Commission sought religious scholars’ help to encourage the people poll votes.

Afghan officials said that nearly 50,000 security personnel would be deployed across the country for 250 seats of National Assembly’s elections.

Meanwhile, President Ghani called Qahraman a hero and true patriot, and urged the nation to turn out in large numbers for voting on Saturday while talking to provincial authorities via a video conference Wednesday.

The president ordered security forces to not let any stone unturned in securing the elections, a statement from the president’s place said.

During the video conference, civilian authorities and Afghan security forces from all 34 provinces reassured the president that their preparation for the election on Saturday was in full swing, the statement said.

The Independent Election Commission’s officials reported that they had successfully transported ballot papers, biometric devices and other sensitive and insensitive electoral material to polling stations, according to the statement.

The UN office in Kabul said that more than 250,000 domestic observers, candidates’ agents and political party monitors had sought accreditation to scrutinise the elections. The UN’s top envoy in Afghanistan said important decisions made on elections and peace would affect the fundamental fabric of the society and future of Afghanistan.

“The Afghan people are scheduled to cast their votes on October 20 to choose their parliamentary representatives for the first time since 2010,” Tadamichi Yamamoto told the Security Council. “Strategic decisions, underpinned by a national consensus, will need to be taken to guide the next steps towards peace,” a UN statement said on Wednesday. Yamamoto, the UN secretary-general’s Special Representative for Afghanistan, noted that the October parliamentary elections would be a major test for Afghanistan’s democratic institutions and cautioned that political challenges could jeopardise the elections unless all leaders engage constructively and peacefully to ensure that elections are held on time.

“I urge all political actors and institutions to perform their duties, act responsibly, and to think of the Afghan people, bearing in mind the country’s bitter past,” said the UN envoy.