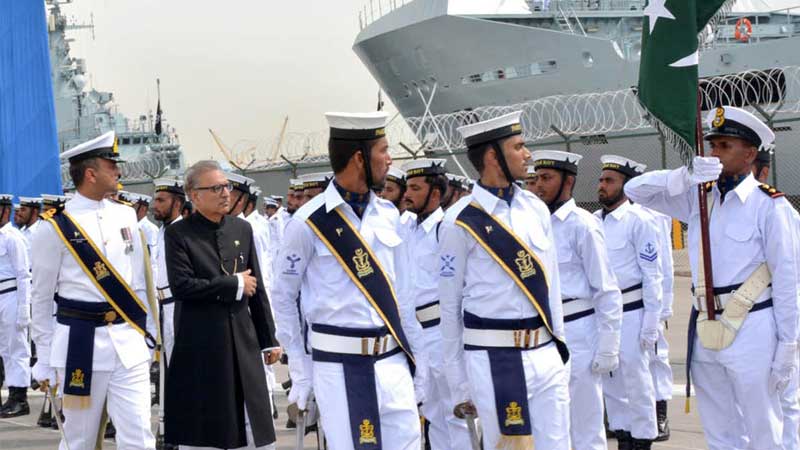 KARACHI: President Arif Alvi said on Tuesday that the government was fully cognizant of the need to have a potent navy and would provide all necessary resources to enhance the capability of Pakistan Navy (PN) and help develop the maritime sector.

The president was speaking at the commissioning ceremony of PNS MOAWIN, an indigenously constructed combat support ship which is the largest warship ever built in Pakistan.

The president said that Pakistan was located at the crossroads of major civilisations and trade routes and its geo-strategic and geo-economic importance demanded collaborative efforts with regard to regional and global security. “We are fully engaged and contributing more than our fair share to fight the forces that are out to destabilize international stability. I laud the efforts of Pakistan Navy in maintaining a secure maritime environment in the Arabian Sea – the conduit for vital shipping lanes, along with its International partners,” said the president.

He said that PN’s efforts in combating international terrorism and piracy were indeed commendable. Alvi said that with the realisation of China Pakistan Economic Corridor (CPEC) and Gwadar Port, the maritime trade and transhipment activity off our coast would increase manifold. “Such developments call for a strong navy to provide security and seaward defence not only for Gwadar port, but along the entire Pakistani coast,” he added.

The president said that Pakistan was blessed with immense maritime resources which could be optimally exploited through development of the maritime sector or the ‘blue economy’. He observed that there was immense potential in marine fisheries and the development of this sector would increase the stock of fish. He said that it would enhance the country’s exports, generate employment and increase foreign exchange.

Expressing his immense pleasure at the commissioning ceremony of the first ever indigenously constructed combat support ship, President Alvi said this milestone had been achieved in collaboration with the Turkish brothers. The president felicitated Pakistan navy and the Turkish friends on the historic occasion and observed that a ship as magnificent as the one berthed before them was undoubtedly a product of years of concerted and dedicated efforts. “It is therefore a truly historic day, not only for the constructors and managers of this ship construction programme but also for the people of our two countries,” he added.

The president noted that PNS MOAWIN was a modern and state of the art combat support ship, capable of performing multiple roles during peace time, national emergencies as well as in crisis situations. “Commissioning of this ship would provide PN, greater flexibility for prolonged operations at sea and also contribute effectively in vital Humanitarian Assistance operations, whenever and wherever required,” he added.

Dr Alvi also commended the dedicated workers, engineers and technicians of Karachi Shipyard & Engineering Works and Savunma Teknoloji Muhendislikve Ticrate (STM) for their professionalism and dedication. He also appreciated the role of Ministry of Defence Production and Naval Headquarters, that had worked diligently to make this program successful.

The president recalled the special and deep rooted relations between Pakistan and Turkey and said that though the two countries were geographically apart, yet they were united by faith, common heritage, shared civilisation and commonality of views on major global and regional issues. “Our people have natural affinity and we take pride in this time tested relationship. Joint ventures like this will further strengthen our relations and open new vistas of cooperation,” he observed.

The president also expressed his confidence that the defence cooperation between Pakistan and Turkey would grow from strength to strength in the years ahead and would be a source of reassurance for both the countries.