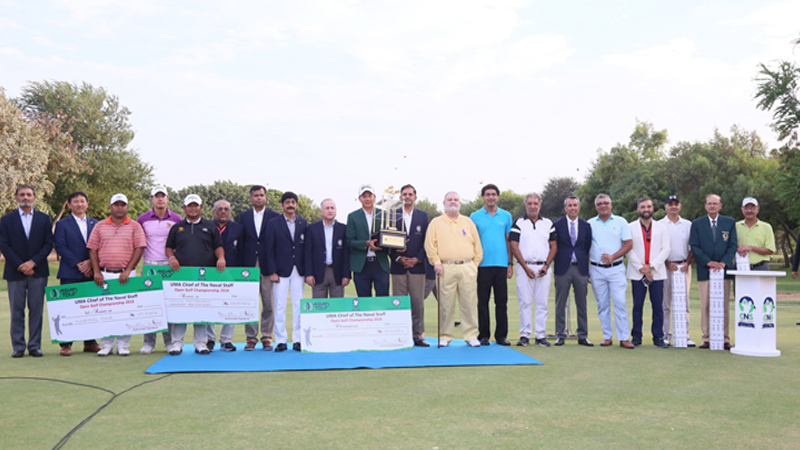 KARACHI: The Asian Tour UMA CNS Open Golf Championship came to a sensational conclusion at the Karachi Golf Club here Sunday when Tirawat Kaewsiribandit of Thailand showed profuse brilliance and intelligence loaded inspirational smartness to emerge winner and pocket cash prize of $54,000. During the course of the four rounds at the admirable and commendable Karachi Golf Course, Tirawat gave a splendid and pulsating display of golfing skills that impressed even his adversaries. Driving off the tees was powerful and accurate and his approach shots to the green were classy and most of the time they landed within five to six feet of the hole. His victory came through scores of 71 in the first round, 69 in the second round, 67 in the third round and an effective 69 on the final day. His aggregate winning score was 276, twelve under par. “Pakistan has been beneficial for me,” Tirawat told reporters after his victory. “And what makes the visit memorable is that I have won the first title ever since I gained entry to the Asian Tour. Undoubtedly I was hesitant to come here and now that I have, I have started to revere the place and I am never going to forget the hospitality extended to me,” he added.

His compatriots Jakraphan Premsirigorn and Namchok Tantipokhakul posted a 72 and 73 on the final day respectively to finish joint second, one shot away from the champion. While Muhammad Munir of Pakistan had the honour of attaining the third position with a marvelous round of 68 in the final round, which gave him a notable aggregate of 278, ten under par. Throughout the final round yesterday, Munir was adequately charged up to give the country a good name and he almost made it to the top, minus a hiccup on the 15th hole which he boggied. Other than this, he remained a champion in command and his effort to make a breakthrough in this championship was relentless. He hit every shot on merit and in the process had birdies on holes 1,7,10,11 and 13, and eleven regulation pars. He suffered one more stroke loss on the front nine, on the ninth hole.

Another Pakistani professional Matloob Ahmed was also outstanding and with scores of 72,70,70 and 68 and a four days aggregate of 280, eight under par, he put up a remarkable effort. At no stage he was cowed down by the presence of international champions and pursued victory with grit and assurance and tenacity. The hole-in-one car remained unclaimed.

The return of the Asian Golf Tour to Pakistan is the result of efforts by the Pakistan Navy, Karachi Golf Club, Asian Golf Confederation and Pakistan Golf Federation.