‘Sindh faces a shortfall of Rs 59bn in federal transfers’ 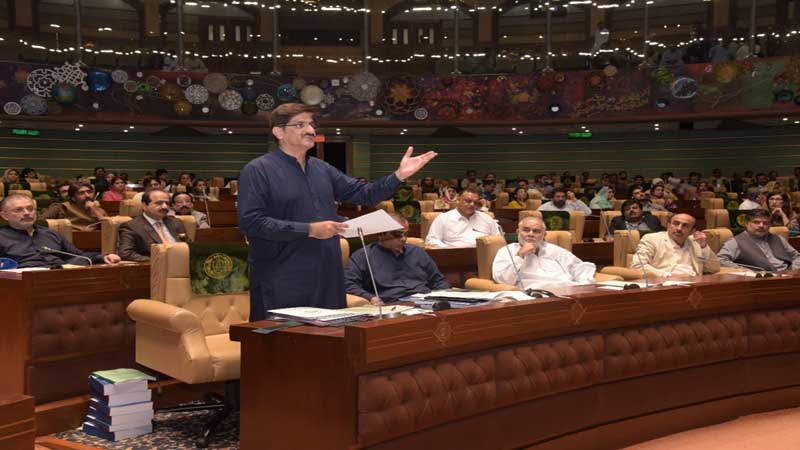 KARACHI: Sindh Assembly finally passed the budget for the fiscal year 2018-19 on Sunday after a six-day-long debate.

CM Murad said that he had presented budget in May 2018-19. “We have adopted the budget with some changes,” he added. Presenting a justification for slashing the ADP budget, CM Murad said that the Sindh government decreased its ADP budget because it was supposed to receive a total sum of Rs166 bn from the federal government against which it received only Rs107 bn. “This is why we slashed our ADP by Rs50 billion,” he said and added otherwise it was quite difficult to meet the development expenditures.

He said that some old schemes of were 2003 were also in the budget book. “We have made a new policy under which 80 percent funds have been allocated for ongoing schemes,” he said. Murad Shah said that 90 percent on-going development schemes had been given 100 percent allocation to ensure their completion. “We are going to complete our 956 on-going schemes,” said the CM and added that the government had finished 700 development schemes last year.

He further said that 26 new schemes had been included in the new ADP some of which were being funded by donor agencies. CM said that a village gasification projects, a medical college scheme and a coastal highway had been added to the ADP. “We want to save Indus Delta and stop sea intrusion by constructing 87-km Sindh Coastal Highway,” he said.

Urban water and drainage: CM Murad said that water supply and drainage schemes had been launched in Karachi, Hyderabad, Mirpurkhas and Sukkur. He added that the Water Commission (WC) was also working on such schemes.

Lining of canals: Asserting that canal lining aided in stopping both seepage and wastage of irrigative water, Murad Shah explained that canal lining funds were used in six weeks because the canal lining work was typically carried out during six-week period of canal closures.

At-source deductions: Murad Shah said that in 2016, Federal Board of Revenue (FBR) took out Rs6.7 bn from Sindh government’s account on the pretext that 1.4 m vehicles were registered by the excise department. He said that the government then approached the State Bank of Pakistan which halted the at-source deduction. CM Murad said that the FBR made direct deductions from the local government account in the national bank yet again in May, 2017. “I registered a First Information Report (FIR) against the relevant bank for unauthorised deduction,” he added.

Health: Reiterating that health was one of his topmost priorities, Murad Shah said that health reforms had yielded tangible results. “We have reduced child and mother mortality rates. Stunting has come down to 9 percent during the last five years – this is a success story,” he said.

The CM chief said that a 12-story building surgical complex was being constructed with 18 operation theaters. “This complex is being constructed with the support of donors. The Jinnah Postgraduate Medical Centre (JPMC) administration had told me that they had a shortfall of Rs1.3 bn so we provided them those funds,” said the CM. He added that the Sindh government was giving Rs13 bn to JPMC every year. CM Murad said that the government was also constructing 13 satellite centers of National Institute of Cardiovascular Diseases (NICVD).

“You (Opposition) have tried to create an impression that Rs60 lac salary was being given to Executive Director of NICVD,” he said. “For God sake don’t discourage those professionals who are working hard in the public interest,” said the CM.

Murad Shah said that there were seven chest pain centers in Karachi and the government was going to construct five more.

Law and Order: CM Murad said that the law and order condition in the province was at its worst in 2008. He added that in 2013, Karachi was declared the sixth most dangerous city in the world. “In 2013, the metropolis witnessed 51 terrorist incidents and we have brought them down to zero,” said the CM. “Our police, Rangers and Military have rendered lot of sacrifices for restoration of peace in the city,” he said.

CM Murad said that street crime had increased due to postings and transfers of police personnel during the tenure of the interim government. “An impression was created that PPP would win election because they had posted their SSPs, DCs and other officials, therefore the caretaker government made major transfers,” said the CM. “Consequently, new officers failed to control the law since they had no background knowledge of the districts they were posted in,” he explained.

CM Murad said that he had issued clear instructions to Inspector General (IG) regarding the effective elimination of street crime.

Speaking of the 10-year-old Amal Umer who died after being hit by a stray bullet during a police encounter, CM Murad said that he visited her house when he heard about the incident. “One of my cabinet members is still in contact with the child’s family,” he said. CM Murad then announced that the government was introducing police reforms in the name of Amal. “These reforms would be called Amal Reforms,” he informed the house.

CM Murad said that the missing children issue had been concocted since only eight children were kidnapped from Karachi and all of them were recovered. “We have 146 children abduction cases this year, in comparison there were 564 child abduction cases in Punjab till August,” said the CM. He added that his government was giving special attention to child protection.

Thar: CM Murad said that the government had provided 14 (4×4) ambulances to Tharparkar. He said that had better infrastructure in terms of roads.

Speaking of the Thar coal project, Shah said that Sindh Engro Coal Mining Company had excavated 3.8 tonne mine to provide fuel [coal] to a 303 MW power plant which was at its completion stage. He said that the first electron of power would be produced by the end of this year. “Thar is game changer and it will bring energy revolution in entire Pakistan,” he said. “We have spent over $1 bn on the infrastructure of Thar,” he added.

CM said that Thar Foundation had been created and all schools of Islamkot would be taken over by the foundation. He informed the house that presently, 24 schools were being run in Thar.

He disclosed that local female dumper truck drivers had been inducted in the region and there were local female engineers working in Thar coal project. “Over 74 percent local Thari have been given employment in Thar coal and power projects,” he added.

Ambulance Service: The chief minister said that he was launching 1122 Ambulance service in the city. In the first phase 66 ambulances were being inducted in the fleet and by the end of the financial year the number of the ambulance fleet would increase to 200, said the CM.

Kalabagh Dam: CM Murad said that Kalabagh dam would never be constructed because people of Sindh, KPK and Balochistan had rejected it. “The water shortage has destroyed our delta and we would not allow further destruction,” he said.

The chief minister said that the FWO had been given contract of K-IV and was told that there would be no price escalation or time extension. “Now Rs3.8 billion price escalation is being demanded,” said the CM. “If all the additional expenditures, including cost escalation, land acquisition and others are calculated the Sindh government share in the K-IV project comes to Rs21.5 bn,” he added.

The CM said that without the federal government’s support, K-IV project would be difficult to complete. He said that he was ready to conduct its audit from any firm the federal government wants. “We would punish the officers who made ill-conceived plans but we cannot penalize the people of Karachi,” he declared. He requested Prime Minister (PM) Imran Khan to provide funds for the completion of K-IV.

He also said that the Sindh government had a jet plane which was purchased in 2006 but not by the PPP. “We tried to purchase a helicopter in 2015 but could not do it. These helicopters need hangers for parking and these hangers would be constructed at the area under the control of Civil Aviation Authority,” said the CM.

Snorkel: “The Sindh government purchased 104-meter long snorkel for Karachi and 10 fire tenders, of them three would be given to the city and rest to other districts,” informed CM Murad.

Chief Minister Syed Murad Ali Shah termed opposition leaders budget speech as irrelevant. He said that he delivered his speech as if he was responding on federal budget. “He spoke about census which was not our subject. He talked about BISP and it is a federal government subject,” said the CM.