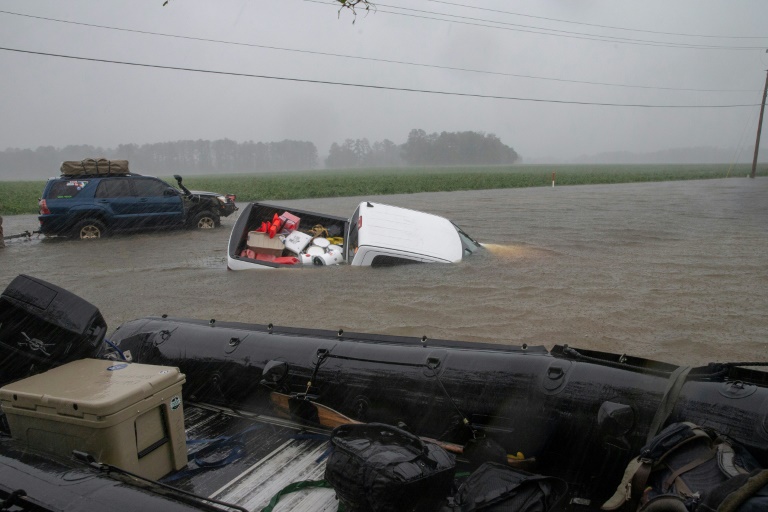 Catastrophic floods raised the threat of dam breaks and landslides across the southeastern United States on Monday, prolonging the agony caused by a killer hurricane that has left more than a dozen people dead and billions of dollars in damage.

The National Weather Service Weather Prediction Center warned Sunday night of “heavy and excessive rainfall over the next couple of days.”

There is an “elevated risk for landslides” in western North Carolina and southwest Virginia, as well as danger of “catastrophic and life-threatening flash flooding” in parts of the Carolinas, it said.

“A lot of people have evacuated already,” said Denise Harper, a resident of Grifton, a small North Carolina town threatened by rising water levels in a nearby creek and the River Neuse. “It’s worrying to watch the water slowly rising.”

At least 15 people have died since Florence made landfall Friday as a Category 1 hurricane near Wrightsville Beach, 10 in North Carolina and five in South Carolina.

Long said more havoc lays ahead as the storm broadens its geographic scope over regions deeply saturated with water.

Of particular concern were the risks to dams, already stressed by heavy rainfall from a tropical storm earlier in the month, he said, urging citizens to heed official warnings about what was now a “flood event.”

AFP / Alex EDELMANOf particular concern are the risks posed to dams in the aftermath of Tropical Storm Gordon, which dumped heavy rainfall in the northeastern states in early September

“What we have to focus on are there any dams that are potentially going to break.”

“People fail to heed warnings and get out or they get into the flood waters trying to escape their home. And that’s where you start to see deaths escalate,” he told CBS News.

“Even though hurricanes are categorized by wind, it’s the water that really causes the most loss of life.”

A dull, leaden sky hung over Grifton on Sunday. Days of heavy rainfall have turned the surrounding farmland into soggy marshland.

Forty miles to the south, the tiny town of Pollocksville, population 300, found itself cut in two on Sunday afternoon after the River Trent burst its banks.

With the rain pausing for the first time since Friday, local resident Logan Sosebee pulled out his kayak to carry food and supplies to those who need it on the other side of the flooded river.

“We still have no water and power, so I’m happy to help if I can, there’s nothing else to do,” he said. “But the current is crazy.”

North Carolina Governor Roy Cooper earlier told reporters “the strongest storm bands are dumping two to three inches of rain (5 – 7.5 centimeters) per hour” over regions that had already received up to two feet of rain.

“That’s enough to cause flooding in areas that have never flooded before until now. The risk is growing as well in the mountains, where rains could lead to dangerous landslides,” he said.

A woman and her baby were among the storm’s first casualties when a tree fell on their house.

Others killed included three who perished “due to flash flooding and swift water on roadways,” according to the Duplin County Sheriff’s Office, and a 61-year-old woman who died when her car hit a downed tree.

At least two people died from electrocution while attempting to connect their generators, while one couple died of monoxide poisoning from running their generator indoors.

AFP / Alex EDELMANBesides federal and state emergency crews, rescuers were being helped by volunteers from the “Cajun Navy” — civilians equipped with light boats, canoes and air mattresses — who also turned up in Houston during Hurricane Harvey to carry out water rescues

Even as some residents began returning to their homes, officials warned of a long road to recovery ahead.

“I think that the storm is likely going to produce impacts greater than Hurricane Matthew,” Senator Thom Tillis of North Carolina said on Fox News, referring to a Category 5 storm that struck in 2016, killing 26 in the state.

“The agriculture industry, the largest industry in our state is hard-hit. We will have to sort out the crop damage,” he continued, adding: “I think that it’s fair to say in terms of economic impact rebuilding that we are talking in the billions of dollars.”

The number of customers without power across North Carolina fell to just under 500,000, with about 20,000 in South Carolina. Fifteen thousand meanwhile were being housed in 158 shelters across the state.

Some 2,800 North Carolina National Guardsmen were actively aiding rescue and relief efforts Sunday with another 1,000 on standby.