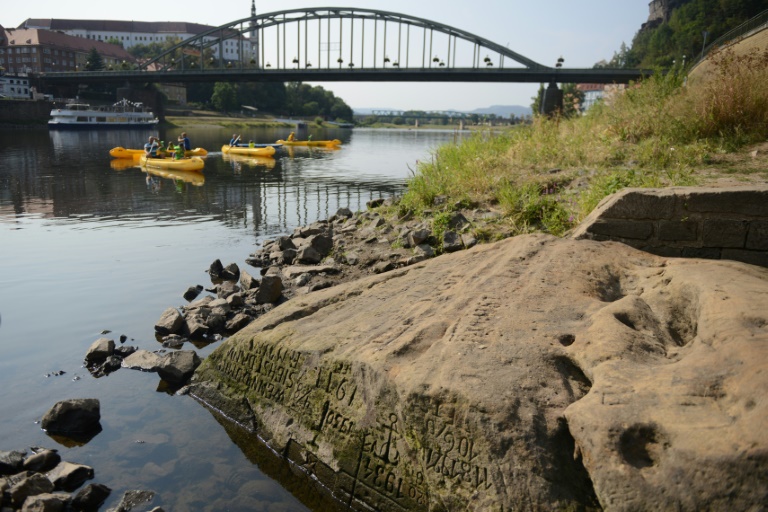 Once an ominous harbinger of hard times and even famine due to critically low water levels, a massive “hunger stone” embedded deep in the Elbe River has reappeared in the Czech Republic after Europe’s long, dry summer.

The boulder in the town of Decin, north of the capital, Prague, is roughly the size of a van and bears the foreboding inscription, “If you can see me, then weep”.

Boatman and riverside innkeeper Franz Mayer etched the words in German — “Wenn du mich siehst, dann weine” — during a period of low water in 1904 in the days when the country was part of the Austro-Hungarian Empire.

“Over the centuries, many people earned their living on the Elbe as rafters, and when there wasn’t enough water to float their rafts, they lost their livelihoods,” Vlastimil Pazourek, head of the museum in Decin, told AFP.

“The rafters engraved the dates of those bad years on the soft sandstone boulders typical for this region, hence the name ‘hunger stone’,” Pazourek said.

About 20 such boulders, engraved with markers and dates going back centuries, can still be found on the banks of the Elbe, a major central European waterway running from the Czech Republic through Germany to the North Sea.

Marked “1616”, the hunger stone on the river’s left bank in Decin, which lies 20 kilometres (12 miles) from the German border, bears one of the oldest dates.

A lot of water has since flowed under the bridges on the Elbe, which is no longer the same river that Franz Mayer knew when he left his etched lament.

The riverbed has been deepened to ease navigation and its flow has also been altered by nine dams built during the 20th century on the Vltava, its main tributary.

At three metres (10 feet), its average water level in Decin today is about 1.5 metres lower than in 1904, according to Pazourek.

Parts of the hunger stone are usually visible for more than 100 days a year when the water level on the Elbe drops to 160 centimetres, he said.