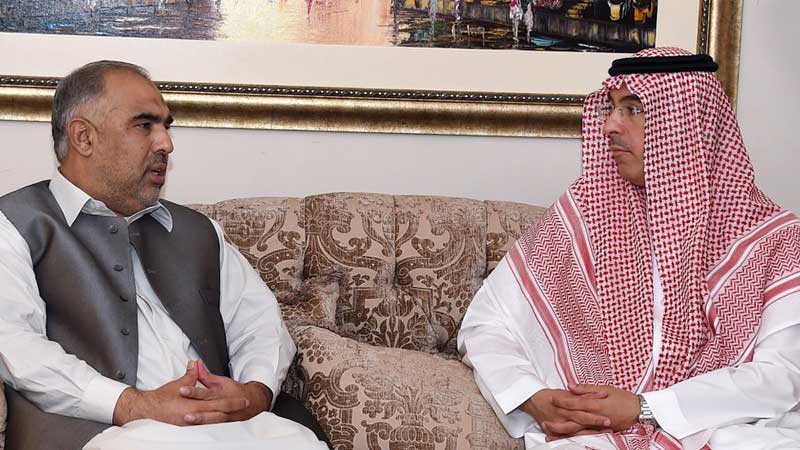 During the meeting, they exchanged cordial talks and discussed a number of issues of common interest between the two brotherly countries and ways of strengthening relations.

While talking to the Saudi minister, NA Speaker Asad Qaiser acknowledged that our respective governments have maintained a time-tested friendship based on such strong emotional links where we have supported each other through every thick and thin and have stood by each other during every regional or international issue.

“The connection between Pakistan and Saudi Arabia is no ordinary relationship, restricted to the formalities of our respective foreign offices. Instead, it is an association deeply etched into the hearts and minds of our people,” he remarked. He further said that “we are bound in irrevocable ties of common faith, culture, history and heritage”.

He added that the Parliament of Pakistan has also remained in the forefront to further cement the brotherly relations between the two countries.

The speaker said that there was a long history of mutual cooperation between the two countries. The generous Saudi investments in various projects in Pakistan and the services rendered by more than 2.6 million overseas Pakistanis in Saudi Arabia reflect our common interests, he added. He said that this relationship needs to be further strengthened to commensurate with the strong fraternal bonds existing between our two countries.

On this occasion, he symbolised true friendship of Pakistan with Saudi Arabia by quoting the famous saying, “Friendship is a sweet responsibility; not an opportunity.”

Time and again, both Pakistan and Saudi Arabia have proved to have adequately fulfilled this responsibility, the speaker added. He also discussed the problem being faced by Pakistani expatriates in Saudi Arabia and also informed the issue of Pakistanis imprisoned there.

Saudi Minister Dr Awwad Bin Saleh Al-Awwad termed relations between the two sides as historic and unique. He said that Pakistan was the closest friend and ally to the Kingdom.

He appreciated the sentiments of the speaker and assured his government’s all-out support to Pakistan in diverse fields. He was confident that fraternal relations between both the countries would further strengthen by frequent interaction between the parliamentarians of both the countries. He said that Saudi Arabia would always stand by its Pakistani brethren whenever needed.

He further said that Saudi Arabia strongly desires to see a prosperous, stable and economically vibrant Pakistan. He assured the speaker to resolve the problems of Pakistanis imprisoned in Saudi Arabia and Pakistani citizens serving there.