Army chief vows to avenge blood being shed on border 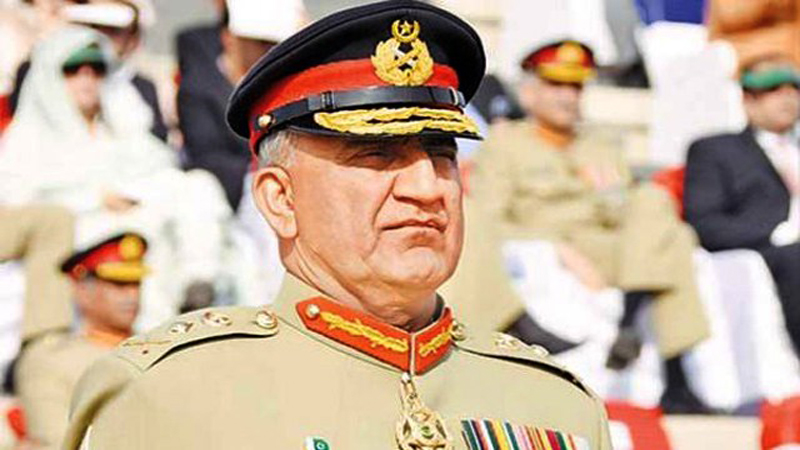 Chief of Army Staff (COAS) General Qamar Javed Bajwa Thursday vowed to avenge the blood being shed on the border of the country. Addressing the main ceremony with regard to Defence and Martyrs Day at the General Headquarters (GHQ) in Rawalpindi, the army chief said September 6 was the day of expressing solidarity with the martyrs of Pakistan and that they all were united for the defence of the motherland. “September 6, 1965, is an important day in the country’s history. It is the day when the armed forces, with the full support of the nation, defeated an evil adversary. Every Pakistani was the nation’s soldier. We were all united to defend our country and played our respective roles. Our soldiers jumped into the fiery pits of warfare but did not let our nation be harmed,” he said.

“All of you gathered here in this ceremony gives credence to the fact that we are all united in our efforts to defend Pakistan,” Gen Bajwa said, adding that the bravery shown by our nation during the 1965 war serves as an important lesson and an inspiration to our youth even today.

The army chief said, “We have learned a lot from the wars of 1965 and 1971. We were able to further strengthen our defence forces in the wake of these wars. Despite difficult economic times, we were able to become an atomic power. Then began the period of non-traditional warfare. Over the past two decades, a wave of terrorism swept the world. The characteristics of war were forever changed. Unfortunately, Pakistan also found itself in the crosshairs of this new war.”

“Fear and terrorism were thrust upon us. Our homes, schools, places of worship, recreational sites and national institutions were attacked. Efforts were made to weaken and divide us from within. But I salute all the citizens of Pakistan and the ones safeguarding our nation who fought remarkably in these difficult times and stood against such elements. We have all successfully fought against this extremist narrative. In this war, more than 76,000 Pakistanis were martyred or injured. To remember these sacrifices we not only celebrate Defence Day but since 2014 also celebrate Martyr’s Day,” he said.

“We have sacrificed a lot but our job is not done. The war is still ongoing. We have yet to reach the pinnacle of peace. We have to make Pakistan reach a level where no one can look at us with an evil intent,” he said, adding the country’s stability and progress and democracy was of utmost importance. “Democracy cannot blossom without observing the democratic traditions in true spirit. We have set on this path 10 years ago,” he maintained.

In his speech, the army chief also paid tribute to the Kashmiri brethren for their just struggle for right to self-determination.