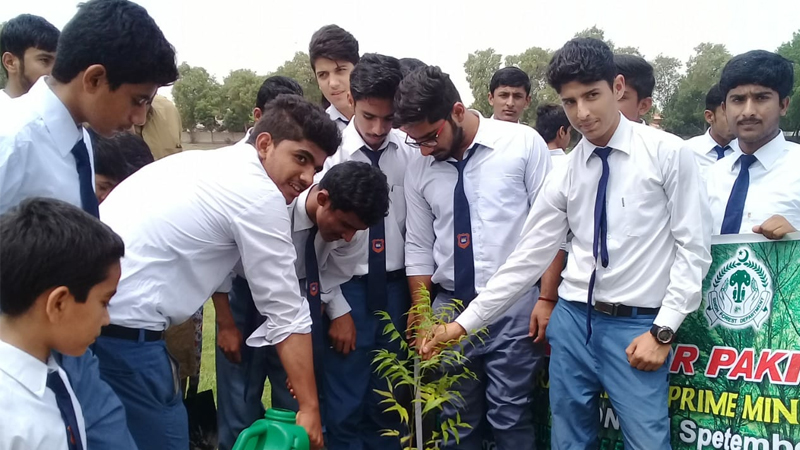 Prime Minister (PM) Imran Khan’s ‘Plant for Pakistan’ initiative aims to plant 10 billion (bn) trees across the country in the next five years. The target of this plantation drive is to enhance the existing forest cover of 4.8 percent to 6.5 percent. However, implementing the ’10 billion trees tsunami’ program and sustaining it will not be devoid of challenges for both federal and provincial governments.

The plantation drive kicked off all over Pakistan on Sunday. The initial milestone for the drive is to plant a total of 1.5 million (mn) saplings. Out of these saplings, Sindh has to plant 500,000 saplings. Reportedly, the Sindh Forest Department (SFD) is going to plant half the trees while the rest will be planted by citizens in divisional headquarters of Karachi, Hyderabad, Sukkur, Larkana, Benazirabad and Mirpurkhas.

So far, details for ’10-billion trees tsunami’ have not been revealed but according to Sindh Forest Department officials, Sindh’s will have to plant between two to three bn trees in order to achieve the national target of 10 bn.

“It will be big challenge for us but at the same time we have capacity to implement it,” said Riaz Ahmed Wagan, the provincial focal person for ‘Plant for Pakistan’ drive who is also serving as the chief conservator of mangroves and rangelands in SFD. Pakistan second most populous province Sindh, which is also third largest province in terms of area, has seen mass level deforestation in recent decades. This situation is often attributed to Forest Department’s alleged corruption, timber mafia, lack of facilities provided to the department, deforestation under the patronage of influential persons, managerial and policies flaws and an overall lack of forest friendly attitude.

Sindh Forest Department owns 2,700,000 acres land out of which 106,000 acres has been encroached. Most of the encroachments on SFD land are under litigation. Taking notice of the issue, Sindh government has also decided to launch an operation against encroachments of Forest Department lands. According to inside sources, the operation is likely to start from next week.

However at the same time, Sindh has a big potential for forestation and a rich historic background in terms of mass-level forestation.There are four forests types in Sindh namely mangrove forests, rangelands (grazing lands in deserts), riverine forests and irrigation plantation.

According to Kashmore District Forest Officer Sanaullah Buledi, Sindh has vast riverine area that will be ideal for mass-level plantation. “The success chances for such a mass- because the soil is good and water availability is not an issue. Planting along riverine areas could be beneficial for the national cause of enhancing forest cover,” explained Buledi. Buledi pointed out that experts are required for a mass level plantation drive. “A mass level plantation drill should not be handed over to non technical people,” he asserted.

A sizeable portion of Sindh is dry. Regions which classify as ‘dry land’ include Thar Desert, Achro Thar Desert and Kohistan. According to Bharmulam Amrani, an environmentalist belonging to Thar Desert, only a well managed plan can sustain such a massive plantation drive in these regions. “Saving a tree is as important as planting a tree. Saving trees becomes a major issue in dry land because the livestock, which the locals depend on for their livelihood, grazes openly there,” explained Amrani. He added that there should be a proper protection plan for planted saplings. “Only those indigenous trees should be selected that suit the area’s ecology,” he further said.

According to Mehmood Alam Khalid, an environmental journalist from Karachi, it will be a big challenge for the government to provide resources needed post-plantation.”During the last fifteen years, there were uncountable plantation drives in Karachi but no substantial results were obtained from them,” Khalid pointed out. “The reason behind this is that there were no follow-ups,” he added.

According to Khalid, continuous monitoring and water availability are the key factors in follow-ups. “Sustainable plantation is only possible when there is investment of resources. We hope that this initiative turns out to be a properly planned and well managed one,” he said.