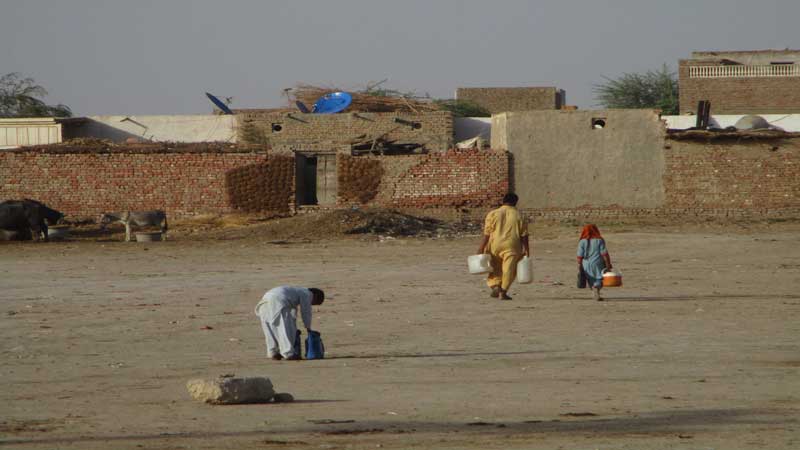 The incomplete water supply scheme has led to low water storage in Sanghar city. This has resulted in 272,000 residents of the city facing a drinking water crisis. Reduced water supply from Indus River has further inconvenienced the water-starved residents of Sanghar who have time and again recorded several protests and shutter down strikes against the ongoing water crisis in the region.

Back in 2009, Pakistan Peoples Party (PPP) led Sindh government started the construction of a 9 kilometer (km) pipeline from Mithrao Canal to add 3.1 million gallons per day (MGD) water in the city’s existing water supply system. Also a part of the scheme was the establishment of a filtration plant and the construction of three additional storage tanks. This project was to be completed by 2011.

However, nine years have passed since the initiation of the project but only half of the pipeline work has been completed and the rest of the plan, including the installation of storage tanks and the establishment of a filtration plant, has not been implemented yet. As per design, the original cost of the three year project was 356.187 million (mn). By December 2017, almost 65 percent of funds had been released by two consecutive PPP led provincial governments. Officials attribute the slow pace of work to inadequate supply of funds. “So far, around 60 percent of the work has been completed. The delay in project also means that project cost will increase,” said Rasheed Ahmed Katper, an executive engineer in Public Health Engineering (PHE) Department, Division Sanghar.

Due to recent visits of Justice (retd) Amir Hani Muslim, who is also the chairman of the Supreme Court (SC) mandated commission on water quality in Sindh, boundary walls of a storage pond in the city were constructed. Earlier on various occasions, dead animals were found in the storage ponds which provided potable water to all of Sanghar.

Following this incident, the residents of Sanghar pegged their hopes on the SC appointed water commission (WC) chief. They now hope that Justice Hani would also play his role in the completion of the delayed pipeline.

While talking to Daily Times on telephone, Naveed Dero, PPP’s newly elected member of the National Assembly (MNA) from Sanghar, acknowledged that there was delay which should not have happened. He said that the delay in the project could be attributed to no inquiry from the party on the area’s elected representatives. “However in 2018 elections, we won from the area because we promised the completion of the pipeline so hopefully the pipeline will be completed soon,” he opined.

According to Citizen Action Committee President Hassan Askari, another reason behind the prolonged delay in construction of the pipeline is theft of city’s potable water by influential landlords.

“At present, the city’s potable water is being supplied through Mithrao Canal via Toori Minor. As per plan, this project is to provide water through a pipeline instead of Toori,” he explained, adding that, the influential landlords stole water for agricultural purposes.

He attributed the delay in the pipeline projects to the influence of these landlords. “So basically these landlords don’t want to see the construction of a pipeline because it would prevent them from continuing their practice of stealing potable water,” remarked Askari. Sanghar’s Chamber of Commerce, which has organised several protests against the incomplete pipeline, has appealed to the newly formed PPP government to pay attention to the city’s water woes and resolve them. “In recent years, we have knocked every door in the district, from political leadership of every party representing on Sanghar to top beaurocracy but nothing happened on ground,” Sher Muhammad, the president of Sanghar Chamber of Commerce, told Daily Times.

“Several new settlements have been established in the recent years and they too are obtaining water from the old pipeline. So there is dearth of additional water to the city,” added Sher.

The quality of drinking water is very poor in the region because the existing pipeline has deteriorated. This has resulted in sewage mixing with potable water. The polluted water has resulted in an increase in water-borne diseases in Sanghar city. According to Dr Allah Juriyo Wassan, a senior physician, a number of diseases including Diarrhea, Dysentery, Hepatitis A and Typhoid are on a rise due to the consumption of sewage mixed water.

“Children being more prone to diseases are the ones most affected by contaminated water,” Wassan pointed out, before adding that the unhygienic water would further worsen the situation in the city. According to the doctor, related government authorities have either failed to oversee the officials responsible for the provision of safe and healthy water to the city or they themselves are involved in the misuse of allocated funds.