Pakistan won’t engage with US at expense of national interest: FM

* Qureshi says political differences should be kept aside on national security and foreign policy matters
* Asad says govt has no plan to go to IMF, for now
* Mazari to take up water issue with India 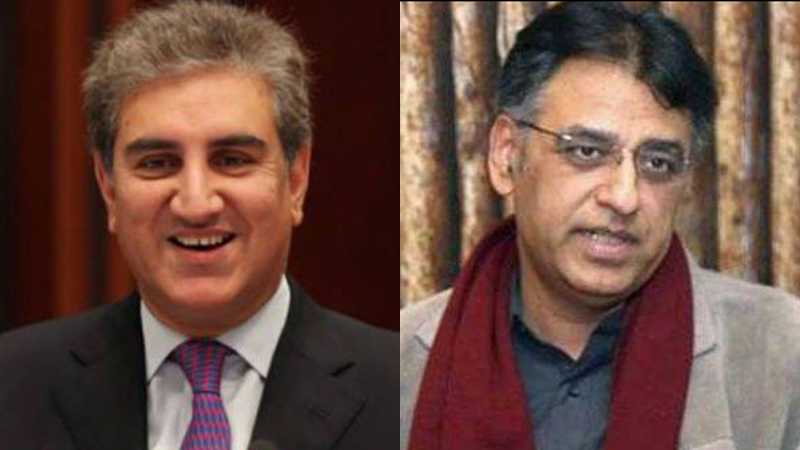 ISLAMABAD: Foreign Minister Shah Mehmood Qureshi Tuesday said Pakistan wanted to improve relations with the United States but not at the expense of its national interests.

Speaking at the floor of the Senate, the minister said weightage will be given to the opinion of the people as well as the elected representatives while taking forward relations with Washington. He said national security and the foreign policy were interlinked and “we should demonstrate unison on them.” “Political differences should be kept aside on national security and foreign policy matters. Given the challenges facing the country, only unity can strengthen our voice,” he maintained.

Responding to Pakistan People’s Party (PPP) Senator Raza Rabbani’s request for reply on telephonic conservation between Prime Minister Imran Khan and US Secretary of State Michael Pompeo, Qureshi reiterated, “US State Department readout regarding the phone call was contrary to facts. The conversation between PM Imran and Pompeo was cordial and constructive in nature.” The press release issued by Pakistan on the conversation is based on facts, he upheld, and also shared that Pompeo is expected to visit Pakistan on September 5.

Speaking in the Upper House, Finance Minister Asad Umer cleared the air regarding seeking a bailout package from the International Monetary Fund (IMF). “The government does not intend to approach IMF for now,” he announced, adding the statement of US administration pertaining to bailout package was unnecessary. “Even if Pakistan goes to the IMF, this won’t be the first time that Pakistan has opted for the program. We have gone to the program 12 times previously,” he said.

Asad Umer acknowledged that country’s economic situation was on ‘life support’. “We will put the situation in front of public and consult the parliament before making any decision,” he maintained.

About the National Finance Commission Award, Asad Umar said it was a constitutional obligation and on the very first day in office, he had directed the finance secretary to initiate the process for new NFC Award. He said it was his utmost endeavour to announce new NFC Award at the earliest.

Minister for Human Rights Shireen Mazari stated that the new government would strongly and firmly take up the water issue with India. She told the Senate during question hour that India has not withdrawn from the Indus Waters Treaty and is liable to the provisions of the treaty. She regretted that the previous governments resorted to the policy of appeasement and did not take up the issue effectively with India. She pointed out that India has constructed dams in violation of the treaty.

Advisor on Parliamentary Affairs Babar Awan told the House that Pakistan was continuously trying to engage Afghan government into dialogue for a possible water treaty. He said that the Afghan side was so far non-responsive to the initiative. He said the construction of new hydropower projects in Afghanistan will certainly have some impact on the water inflows in the country. He said Afghanistan Cell has been established at the office of the Pakistan Commissioner for Indus Waters, which collects data through different sources and monitors inflows in common rivers with Afghanistan.

Baber Awan said the water storage capacity of Tarbela Dam was on decline due to silting in the reservoir. He said the best possible arrangement would be to upstream storage to catch the sediment before entering the Tarbela dam.

On a point of order, PPP leader Sherry Rehman appreciated the presence of Prime Minister Imran Khan in Monday’s proceedings of the House. She said the promises made by the government to ensure good governance was also welcomed. She, however, said the government should fulfil the promises it made with the people during the elections.